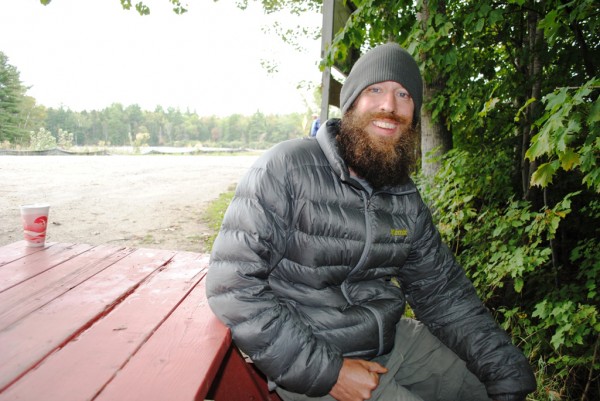 Ten years ago this month, I set out on a two thousand mile walk. Battling North Georgia snow, North Carolina rain, New Jersey bears, Maine black flies, and a generous helping of adolescent angst, I slogged my way from Georgia to Maine on a “break” from college along the Appalachian Trail. Shortly after, I wrote a narrative about the walk that shared two of the trail’s main features: long and non-remunerative. Stumbling upon it a few weeks ago—before heading up past Hiawassee to hand fried chicken out to hikers idling hungrily at a road crossing (an act known as “trail magic”)—I found a few entertaining scenes, long forgotten. This one begins in a hotel room in North Carolina, where I stopped for my monthly shower:

I flick on a florescent light and stare into the mirror. These arms are thin and ropey, vestigial in appearance. These legs are bird-like. Bones jut sharply from a worn waist and shoulders. This face is sunned and rough, like the hand that touches it. Thin, too. These feet appear to have been pounded by a meat tenderizer. I smile at the would-be beard, which is also mine. (Crying would be a waste of salt.)

The walk is changing my body, making it streamlined, efficient, rid of unnecessary parts. I wonder what else will be lost.

The shower, as usual, is a shock: clear water turns brown. Dirt, gleaned from two states, enters a drain. There are mountains in the pipes below.

I get out, clip my toenails into a trashcan. I lie down on the bed, look around. Under the lamp, there’s a Bible with a note: “God’s in here.” Outside, the sky is darkening. Eventually, I call my mother. She’s glad that I have clipped my toenails, that I am lying down on a bed, that I have called her: that I seem okay. I don’t tell her how skinny. I promise to stay put until the storm passes, to eat. Never has her instructions come so easily.

I walk out, down the road, and grunt up from the asphalt dip, each drip of sweat marking my remove from the reliabilities of the road: a big bed and a warm shower and a hole-less roof and a hedonist’s trove of other soft pleasures that rent for sixty dollars a night. From a girlfriend in a car with enough gas to take us from near Franklin, North Carolina, all the way back to a basement bedroom in Atlanta, Georgia.

There at home, safe in the dry humming glow of captivity, I could trace this trail across a five-dollar map on the wall beside my bed (the one I memorized for months) with an index finger. With my eyes closed and my heart doing a steady seventy per minute, hidden from the sun. It would take just a moment—a breath and done. But I have chosen the sweaty, solitary method. And it will take longer.

Perhaps an hour into the forest, overtaken with webs so thick and frequent that they gauze my face—as if the spiders are hiding some great secret from me—I hear a rumble. It’s too thunderous to be human, but not terrible enough to be the sky. I draw nearer and it takes shape: there is a head-swallowing-mane with two fierce orbs in its midst, and a giant canvas contraption that looks like a hunk of mountain hanging from its heaving back. It calls itself Lion King. And it speaks from its colossal gut:

“This damn video camera—see the bag?—it weighs me down so much I can hardly walk. When I thru-hiked in ’99,” now a look of wonder, “my whole unit, we weighed about seventy pounds less. And that margin ain’t all camera.” Without a chuckle or a pause to let me pass or speak, he goes on walking and talking:

“I remember this section of trail clear as day. You—you’re a thru-hiker, right?”

“Well that ain’t much of a beard you got. But, anyway, you’re gonna come up on what looks like a little hill right after this road down here, and, well, it ain’t gonna be little. Damn near mountainous is what it’s gonna be. And when you hit it, you’re gonna wish you’d hitched with me, ‘stead a hittin’ it,” he pauses to consider his wisdom. “See, there’s no need to hike every single square foot twice, since I already did the whole thing back in ’99.” He allows himself that wistful gaze again.

“Sure,” I say, leaving him growling in a roadside gravel rut, fiddling with his ponderous load.

Sure enough, after a few hours of progress up, over, and down the backside of a bald that broke open the sky like a geologist’s hammer thrown upon a geode, I arrive at a shelter. Lion King is sprawled decadently across the surface of a picnic table, looking rested. He’s surrounded by impressionable thru-hikers who watch his mad gesticulations with a mixture of awe and fear. He speaks easily, puffing on a hand-rolled cigarette between points, lecturing on the myriad challenges of hiking and documenting the Appalachian Trail.

“You,” he says, seizing the bulging eyes of an unfortunate young fellow nicknamed ‘Spit.’ “If you don’t cut those silly straps hanging off your pack like pom-poms, you’re not gonna make it.”

He is what I both hope and fear I will become: single-minded, obsessed, myopic. A man focused to a fault.

I filter some water from a stream and gnaw at a little beef jerky before saddling up. As I depart, peering at the ground unspooling before me like an endless brown thread, I hear Lion King call out.

Contact Charles Bethea (charles.bethea@gmail.com) to learn about his autobiographical guided hikes along the Appalachian Trail.