Home Uncategorized Too many Georgia women die in pregnancy-related deaths. Will the state be...

Last year, a little more than a week after the birth of her daughter via emergency C-section, Jenné Shepherd returned to the hospital, this time to the emergency room. She hadn’t been able to keep food down for days, and she sensed something wasn’t right. But instead of taking a closer look at what could be wrong, hospital staff sent her home with a prescription for antibiotics and instructions to follow up with her primary-care doctor, which Shepherd did two days later. “I think the furthest she got was taking my temperature before she said, ‘Something is wrong—you need to go back to the ER.’”

After an examination at a different Atlanta hospital, a doctor informed Shepherd that she was suffering from an advanced staph infection, and her kidneys were already failing. His words, as Shepherd remembers them: If you had waited until tomorrow [to come in], you would have died.

Shepherd was prepped for an emergency hysterectomy. Two months and a half dozen surgical procedures later, she was released from the hospital, but her treatment continued with another month of home healthcare, in addition to physical therapy to relearn how to walk (and, later, behavioral therapy to work through acute anxiety stemming from the trauma). By the time Shepherd could walk and drive, her daughter was six months old.

“I couldn’t even advocate for myself,” says Shepherd, a community activist herself and former president of the neighborhood group Adair Park Today. “I couldn’t remember things. I was in so much pain. Every day was like, I just got to get through the day.”

But because she survived, she’s one of the lucky ones. The number of Georgia women who die from pregnancy-related causes is startling: According to 2018 data from the Centers for Disease Control and Prevention, the state’s rate of such deaths was more than double that of California, and, in many recent years, that rate has been the highest in the country. Georgia’s unusual number of maternal deaths stems in part from the fact that Black women, who make up a larger portion of Georgia’s population than in many other states, are three times more likely to die from pregnancy-related causes than white ones.

In Georgia and elsewhere, women die as a result of pregnancy complications before giving birth (such as from a stroke brought on by elevated blood pressure during pregnancy); as a result of complications related to birth (including an infection or hemorrhage); and, perhaps most surprisingly, from untreated conditions that manifest weeks or months postpartum. A critical component of solving the maternal mortality crisis, therefore, is to look not just at how women die but when. More than a quarter of women who died from pregnancy-related causes in Georgia were more than six weeks postpartum, according to a study of 250 maternal deaths from 2012 to 2014 by Georgia’s Maternal Mortality Review Committee. (Data from more recent years have not yet been examined by the MMRC.) Of those deaths, approximately 65 percent were preventable.

One of the most immediate solutions, according to medical experts and the recent bipartisan Georgia House Study Committee on Maternal Mortality, is expanding Medicaid for women who recently gave birth. State lawmakers are pushing for that expansion, though the legislature is currently on pause at least until mid June due to COVID-19. The House study committee recommended that women be able to remain on Medicaid for a full year following childbirth, though the version of the state budget passed by the House and awaiting passage in the Senate would extend it only to six months. That budget could change drastically due to COVID-19. [Editor’s note: On June 24, HB 1114, which would extend Medicaid for low-income mothers for up to six months postpartum, passed the state Senate and House. It still has to be signed by Governor Kemp and will need to be funded, which the AJC says is “far from guaranteed given the coronavirus’ economic toll on state coffers.”]

More than half of Georgia’s births are to low-income women covered by Medicaid—but currently, that coverage is cut off 60 days after delivery. Patients can subsequently reapply to Medicaid as parents, but the income threshold for eligibility drops substantially. According to the Georgia Budget & Policy Institute, 76 percent of Georgia mothers making less than 220 percent of the poverty line ($37,900 for a family of two and $47,700 for family of three) made too much money to requalify for Medicaid after the 60-day period.

“Not every woman may need to come to the doctor for the whole 12 months, but for those who had pregnancy-induced hypertension or diabetes or had a C-section with complications, [expanded Medicaid coverage] gives us an opportunity to intervene,” says Dr. Valerie Montgomery Rice, president and dean of Morehouse School of Medicine. “That makes a big difference.”

Though individual bills under the Gold Dome this session differed on the length of time that Medicaid should be expanded to new mothers, the idea received support from members of both parties in both chambers.

Representative Sharon Cooper (R-Marietta), who cochaired the House study committee, cosponsored a bill proposing to extend pregnancy Medicaid to six months postpartum as a compromise between the committee’s year-long recommendation and the governor’s call for budget cuts. A six-month extension would cost the state about $20 million a year, compared to estimates of between $32 million and $70 million for 12 months. Cooper did not respond to multiple requests for comment.

“It’s a half-measure,” says Representative Renitta Shannon (D-Decatur), who sponsored legislation to extend postpartum Medicaid to a full year back in early 2019 and again this year. “To me, what a six-month extension basically says is, We’re going to save the lives of some women but not all. Why wouldn’t we do what we could to make sure we’re trying to save the lives of as many women as possible?”

As a Black woman and a community organizer for reproductive-rights initiatives, Shannon says the issue of postpartum health resonates on a personal level: Her sister, who had a baby in March 2019, had to be under a doctor’s close care for a year following the birth to manage pregnancy-induced high blood pressure. If she’d been on Medicaid, even with a six-month extension, she would have had a hard time getting that care, Shannon claims.

Medicaid expansion, of course, is only part of the solution—one that serves women in a specific income bracket and in a specific window of time. Other systemic problems contribute to Georgia’s high maternal mortality rate and are harder to fix. The state’s ongoing shortage of healthcare providers and rural hospitals—over half the counties in Georgia do not have an obstetrics provider—leave many women, on Medicaid or not, without access to pre- or postpartum care.

There are studies showing that doctors and healthcare workers are less likely to accept or to prioritize Medicaid patients because of low reimbursement rates. Other studies, such as one published in 2018 by the Yale Global Health Justice Partnership, found that the medical community doesn’t take the concerns of Black female patients seriously enough.

“What Black women have reported, and what I have actually seen in action, is that they don’t believe that they are heard or listened to in the same way that others are,” says Montgomery Rice, the Morehouse School of Medicine dean. In 2020, the school hopes to launch its Center for Excellence on Maternal Mortality to develop strategies for more equitable prenatal and postpartum healthcare.

Shepherd wasn’t a Medicaid patient: With private health insurance through her husband’s job, a doula, and access to her choice of Atlanta’s many healthcare providers and hospitals, she had all of the tools at her disposal for a healthy birth and aftermath. Yet, she barely survived. Looking back on her experience, she wonders: “What happens to a person who doesn’t have any of that?”

Shepherd now is running for a seat in the state House (District 57), and she shares her story on the campaign trail. “I want to be that person who advocates for Medicaid expansion, who says that 60 days is not enough. And if you should happen to have some kind of situation like mine, six months would have definitely not been enough.” 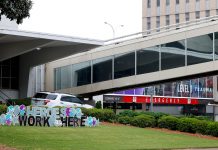