Parterre Party
When Carey Pickard and Chris Howard throw a party—which is often—guests spill across nearly an acre of garden rooms behind their Macon home, a mid-19th-century waterworks structure. After buying the historic building in 2001, the sociable couple transformed the empty yard into a wonderland of foxgloves, hydrangeas, and boxwoods. They’ve since hosted seven weddings there (including their own). The eight outdoor seating areas include a dining room, a camellia garden, a cutting garden, a parterre garden, and a rondel inspired by one at Sissinghurst Castle in Kent, England. The focal point is the 60-inch urn from Scott Antique Markets, which erupts with annuals each year. “They found the urn in Belgium in an abandoned park,” says Carey. “We’ve added a table, chairs, benches, and pots to make it the center of the garden and the main area for parties.”

“We used to be boxwood snobs,” says Chris, “and, for years, preferred the slow-growing American or English versions, but we used Korean boxwood ‘Wintergreen’ for the parterre and have been thrilled with them.” —Lisa Mowry

Living Art
The Druid Hills garden of Drs. Ann and Frank Critz has been 42 years in the making, a living museum with ever-changing exhibits. Its latest curator, the Critzes’ son, John Critz of Tilting Windmill Landscape Design, grew up with its stories.

Sweeping beds of annuals and perennials line a circular driveway in front of the Tudor-style home, which the Critzes purchased in 1976. Built in 1921, the house was rich in history—golf legend Bobby Jones was married there in what was then the bride’s home—but poor on curb appeal. “It wasn’t much—just weeds with a huge oak on one side and a holly out front,” Frank says. “But the garden just grew and grew over time, mainly because of Ann’s passion.”

Now, the grounds feature a series of rooms, including terraces, a cozy nook around a fireplace, a playhouse for grandchildren, and lots of serene sitting areas for kicking back and taking in the lush scene, created with help from designer David McMullin of New Moon Gardens. There’s a white garden brimming with floppy Annabelle hydrangeas and variegated Japanese maples and Julianna’s Secret Garden, a whimsical, brick-walled garden that Frank Critz built in honor of their daughter in 1988.

The Critzes’ annual display of tens of thousands of tulips and other bulbs has made it known as “the Tulip House.” A welcome sign invites guests.

“We get busloads of people pulling up out front,” says John. “It’s just something we really enjoy sharing as a family.” —Danny C. Flanders

Cafe Chic
Modern and classic bistro chairs for the patio 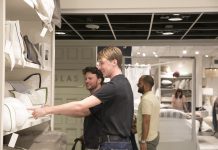 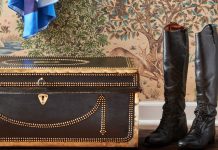