Home Uncategorized Hines Ward Builds His Dream House
Most NFL wide receivers don’t devote downtime to reading Architectural Digest in a hotel room, but Hines Ward has always surprised people. Yes, this local sports star played a big role in two Super Bowl wins for the Pittsburgh Steelers, and he waltzed and did the cha-cha well enough to win Dancing with the Stars this past summer. If the football lockout hadn’t gotten resolved, maybe he could have appeared on Bravo’s new Million Dollar Decorators.
“I watch HGTV all the time,” says Ward. “I appreciate what designers do, because they have an eye for the final product, bringing everything together.”
Ward’s custom home in north Atlanta combined his wish list—often inspired by projects he’d seen in home and garden magazines or during his travels—with practical ideas from a talented team of architect, designer, builder, and real estate broker. “I like modern, but we wanted to build something that will last for a long time,” says Ward, who grew up in Atlanta and wanted to respect the city’s architectural tradition. The athlete also envisioned a spacious home, with plenty of room for memorabilia and entertaining—but more intimate than other supersized celebrity homes he’d seen. Privacy was a big priority.
Anthony Lacy, a real estate broker and confidante to Ward, remembers getting the call in 2006 that his friend was ready to move. “He told me, ‘I want to build my final house, my dream house,’” says Lacy. After finding the right location, Lacy searched for the right professionals, selecting architect David Grace to work with Ward’s interior designer Ann Davis. Many interviews later, Lacy discovered local builder Dick Clegg, who would have the task of interpreting everyone’s ideas with a critical eye. “I’m the hub of the wheel, the person in the middle of all these creative people,” says Clegg.
The fact that their client would be gone eight months of the year could have been problematic for the Atlanta-based crew, especially since Ward wanted to be involved in all decisions. However, the team kept in touch with real-time, on-site video and lengthy conference calls. The football star contributed some winning ideas of his own: chocolate-colored woodwork that reinforces the masculine decor, a master suite featuring a tall upholstered headboard and raised platform for the bed, a poker room for hanging out with his buddies (“I decided to bring a little Vegas home to me,” says Ward), and tile floors on the lower level so his seven-year-old son Jaden and other children could run indoors with muddy feet. Glamorous fabrics, large-scale art, and swanky lighting feel like a luxurious resort, and that’s entirely the point. “I wanted my house to be like a W Hotel,” says Ward.
But there’s a softer side to the house, too. Ward’s mother lives on the property in her own apartment. The football star’s family history and devotion to his mother are part of what endears him to fans. Born in Seoul, Korea, to a Korean mother and African American father, Hines moved to Atlanta with his family when he was a year old. His parents divorced soon after that, and his mother sometimes worked three jobs at once to support them. While at Forest Park High School, Ward was an all-American football player (the two-sport athlete was also drafted by MLB’s Florida Marlins). He earned a spot between the hedges at the University of Georgia in the mid-1990s, playing various positions and eventually earning All-SEC honors his senior year.
Drafted in the third round by the Pittsburgh Steelers in 1998, Ward went on to become the team’s all-time leader in receptions, receiving yards, and receiving touchdowns. The only receiver in Steeler history to top 1,000 receiving yards for four consecutive seasons, he was named to the Steelers’ 75th Season All-Time Team. Ward was selected MVP at Super Bowl XL, becoming the first Korean American with that distinction. His nonprofit organization, the Helping Hands Foundation, aids underprivileged American youth and, overseas, biracial children who have suffered discrimination, especially in Korea.
“Family is the most important thing to Hines at the end of the day,” says Lacy of the man President Barack Obama has called “the happiest man in football.” “Throughout the whole process with the house, he’s always figuring out a way to have his mom and son nearby.”
ATLANTA’S NUMBER ONE FAN
On why the ATL will always be home “There’s a mix of everything here. It’s good for families, great for singles, too,” says Ward.
Favorite place to take Mom out for a meal “We head to Buford Highway and go to one of the Korean restaurants,” he says. “I also like Twist . . . really, anything Asian. I would say I’ve probably tried every sushi restaurant in town.”
But he’s no food snob “To be honest,” says Ward, “I can go to Chops one day and Red Lobster the next.”
What he misses Going to more—actually, any—University of Georgia football games. “They’re always playing during my football season, so I can’t get there,” he says, adding, “I’m always going to be a big Bulldog fan.” Also, going to a Braves game or other local sports. This hometown boy draws attention, making it hard to have a regular day at the ballpark. Would he ever use a disguise to go out in public? He replies quickly, “No, I’ve got to be me.”
RESOURCES
Architect David Grace, A Classical Studio, acsfra.com, 770-248-2800
Interior Designer Ann Davis, Design by Time, dbtfinedesigns.com, 678-508-3778
Real Estate Broker Anthony Lacy, Lacy and Associates, lacyandassoc.com, 404-995-7054
Builder Dick Clegg (project manager: Brian Sisterson), Housing Trends, housingtrendsinc.com, 770-449-1888
This article originally appeared in our August 2011 issue.
Advertisement 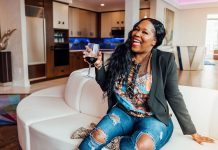