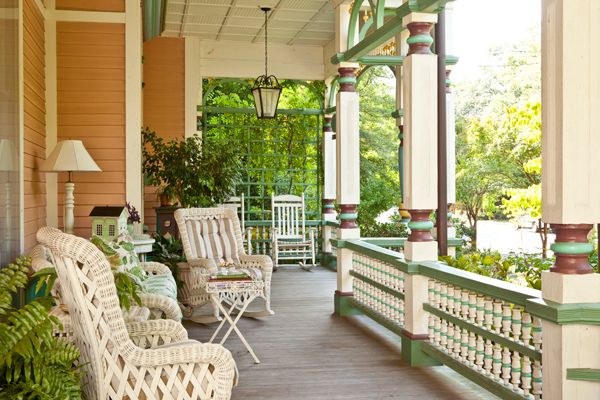 To make new friends in Inman Park, there’s no need to wait for a formal invitation. On the last Friday of every month, residents hold a Porch Party, where anyone new or old to this intown neighborhood can drop by for an impromptu get-together on a designated porch. “It’s a great way to get to know your neighbors, and it’s actually a pretty easy party to throw, since everyone brings a dish and their own drinks,” says Pat Westrick, the IP resident who organizes these monthly gatherings.

Porches have always played a key role in Inman Park, well known as Atlanta’s first planned community and for its exuberant Victorian architecture. In the days before air-conditioning, sitting on a wraparound porch was a way to catch the breeze. The tree-lined streets near Downtown were also ideal for strolling and chatting with neighbors lounging outside. In fact, that’s partly how entrepreneur Joel Hurt promoted the lots when he began selling them after the Civil War: a little bit of country life in the city. So right from the start, Inman Park had that Mayberry quality.

Of course, Mayberry looked more like Haight-Ashbury by the middle of the last century. Suburban flight and urban blight had turned many of the once-grand homes into decayed apartment buildings with junked cars sitting outside and absentee landlords. Fortunately, a few prescient pioneers began restoring the neighborhood in the 1970s, and its original glory was revived.

Today’s Inman Park is a unique blend of its bohemian and aristocratic pasts, and throughout this history, porch living has remained a constant. “It’s just the way we stay connected in Inman Park,” Westrick says.

177 Elizabeth Street
Pat and Richard Westrick
IP residents since 1975
When Pat Westrick and her husband moved in during the free-spirited seventies, Inman Park prices were cheap, and most residents did their own renovations to save money. The Westricks restored the white gingerbread trim on their yellow Victorian, using an old photo as a reference. (They found another photo in which the facade was fuchsia.) These days, since most of the houses have already been renovated, everyone just has more time to visit on front porches, Pat observes. “Inman Park still has the same kind of spirit—the neighborliness—that it did back in 1975,” she says.

162 Hurt Street
Alfredia and David Scott
IP residents since 1999
While some people may think of an outdoor porch as an extension of the indoors, Alfredia Scott views hers differently. “I wanted it to continue the feeling of what’s going on out in the garden,” says Alfredia, whose husband, David, represents the Thirteenth Congressional District. Accordingly, her front porch is filled with garden statues, flowers, and ferns. It’s also why she chose the trim color of this regal, hundred-plus-year-old brick house: a light mint green, the color of spring, Alfredia’s favorite season.

889 Edgewood Avenue
Jan and Windell Keith
IP residents since 1990
Windell Keith used to travel often to San Francisco, so it’s no coincidence that the circa-1890 King-Keith House now resembles one of the famed “painted ladies” in the California city. “I used to study the Victorian houses there, and I knew where we wanted to start, color-wise—with peach,” says Windell. Of course, he didn’t stop with one color. True to the San Francisco approach, more than a dozen spring colors now emphasize the home’s elaborate woodwork and architectural accents, and it’s become one of the most photographed buildings in the neighborhood. The residence is also a B&B, and Windell has noticed that guests love relaxing on the upper-level porch, one of the higher perches in this part of Atlanta. “You get a good sense of what’s going on in the neighborhood while sitting up there, but with all the trees, there’s enough privacy that people don’t necessarily see you,” he says.

882 Euclid Avenue
Christina and Alan Farabaugh
IP residents since 1995
Even people who have never met the Farabaughs know their house. The oversized outdoor lanterns that Christina changes on a whim—most often red, but sometimes black for Halloween or hand-painted for a party—catch the eyes of passersby. “The people who notice the lights really pay attention to them and depend on me to change them out,” Christina says. As an artist, she felt compelled to jazz up the three plain lights previously on the porch, but it’s all part of an on­going priority to bring a modern edge to a graceful Victorian house.

952 Euclid Avenue
Douglas Weiss and Chris Casey
IP residents since 1998
Douglas Weiss and Chris Casey had admired this house for years, so it was serendipitous when Casey drove by just as the previous owner was hammering a “For Sale” sign in the front yard. By the next day, Casey and Weiss had the house under contract. As an interior designer, Weiss loves the intricate woodwork, rich chocolate color, and deep eaves of the Dutch Colonial Revival structure. “It’s a masculine house, maybe more similar to Craftsman style than Victorian,” he says. (At one point, though, it was a triplex covered in asbestos siding.) Weiss (in photo) and Casey host an annual porch party for up to 200 guests during the Inman Park Festival, with the upper deck offering the best views. “It’s a crazy and diverse neighborhood,” says Weiss, “but in a good way.”

766 Dixie Avenue
Diane and Bill Jordan
IP residents since 1973
Diane and Bill Jordan were happily ensconced in a new Decatur house and expecting their first baby in 1973, so Diane was skeptical when her husband suggested they check out an old, slightly dilapidated house in Inman Park. “This house had a real hippie living there, with marijuana growing in an upstairs bedroom,” she recalls. Most interesting was the front exterior: alternating blue and green clapboards, which made the house appear striped. The front porch had been enclosed, with macrame hangers everywhere. Not only did the Jordans restore the original open porch, but they also eventually acquired the lot next door, allowing them to extend the front porch along the side. The hippie house turned out to be a great family home, Diane says. They have raised four children there, even hosting two wedding receptions on the porch.

866 Euclid Avenue
Bobbi and Andre de Winter
IP residents since 1999
Inman Park’s modern revitalization began with this Queen Anne–style house. Antiques dealer Robert Griggs bought it in 1969, restored the ornate architectural details, and persuaded friends and colleagues to do the same throughout the neighborhood. Current owner Andre de Winter sees himself and his wife as stewards of its history. “We’re just the keepers of this house, not really the owners,” he explains. A Realtor himself, de Winter was immediately drawn to the house, one of the oldest in the city, where the front porch made of Italian marble and Stone Mountain granite is just one of its charms. A belvedere, an Italian word meaning “beautiful view,” is a unique round porch located high in the turret. “This is the house that really stands out in the neighborhood,” Andre says.

36 Delta Place
Glenda and David Minkin
IP residents since 1997
Inman Park developer Joel Hurt built this house in 1892 for his brother, a physician who had an office in his home. Like other IP houses, however, at some point it served as a boarding house and suffered damage. Glenda Minkin chose a deep blue paint for the cedar shakes (one of the few neighborhood homes with that sort of exterior) and white for the trim and porch floor. The couple added a trellis, with an oval insert that mirrors a window by the front door. The trellis is covered in jasmine, with other potted arrangements nearby. The Minkins’ favorite way to use the porch? “We love to set up a bar outside so that guests can help themselves to a drink before venturing inside for a dinner party,” says Glenda.
The Fortieth Annual Inman Park Festival
The neighborhood’s two personas—imagine the carnival-like atmosphere of Bourbon Street merging with the historic architecture of Charleston—come together for three days later this month. Inman Park’s Spring Festival and Tour of Homes will be held April 29 to May 1. As usual, this celebration includes a huge street market, music and dance performances, arts and crafts displays, a dozen or so homes and gardens on tour, and the popular Saturday parade—with floats, bands, art cars, jugglers, drill teams, and the infamous Kelly’s Seed & Feed Marching Abominable. For more information visit inmanparkfestival.org. This year’s parade will pay homage to some of the pioneers who sparked the area’s rejuvenation.
This article originally appeared in our April 2011 issue.
Advertisement