If the term “co-living” conjures images of formerly lonely millennials cooking dinner in a shared kitchen, toasting their dirt-cheap rents for dorm-size flats, and generally looking to party—well, that’s not the intent in Sweet Auburn.

Awethu House, a two-story, restored brick building at the corner of Auburn Avenue and Hilliard Street that was formerly a dry-cleaning business, doesn’t open until May, but all seven units have been claimed.

Billed as “co-living for changemakers” and as an antidote to housing shortages and displacement, Awethu House’s suites are available via memberships to a property management and incubator group called the Guild, which has operated a fellowship program for entrepreneurs in East Lake for two years.

Nikishka Iyengar, the Guild’s founder and CEO, expounded this week on the co-living concept in general and the specific goals for Sweet Auburn. Some key takeaways:

New ground: This is the first co-living concept of its kind in Atlanta. “Co-living has become kind of a trend now in other cities like New York, San Francisco, other parts of the Bay Area, and Washington D.C.,” Iyengar says. “These cities feeling a housing squeeze, it’s really taken off there. But so far, in Atlanta, we’re the only ones. I imagine that we won’t be for much longer, given Atlanta’s housing trends.”

Each Guild property will carry a different name, and Awethu—translation: “power to the people”—was once used as an anti-apartheid rallying cry. A community organizer worked with neighbors to choose the property’s name, Iyengar says. The building has upstairs communal space, and the Guild will lease a nearby lot for events.

What renters get: Awethu House will offer two types of memberships lasting three, six, or 12 months, which Iyengar says save residents $300 per month, on overage, versus standard studio apartments in popular neighborhoods such as Old Fourth Ward.

Three or four furnished units will be dedicated market-rate suites costing $1,200 per month, but that rent includes utilities, high-speed Internet, a washer and dryer, and parking; two $975/month suites are reserved for moderate-income renters; and the remaining suites will be Airbnb short-term arrangements.

The micro-apartments average between 350 and 400 square feet, but come with a full kitchenette: stovetop, dishwasher, fridge, and a convection oven. Elsewhere, expect creative furniture design by way of Murphy beds, small couches, and diminutive desks.

Community perks: All residents will have access to a coworking space operated by Remerge on the building’s first floor. But the main aspect differentiating Awethu House from traditional apartment complexes is the curated schedule of community events all members can attend for free.

“[Applicants who want] to live in our spaces are artists, activists, entrepreneurs, or teachers—or just folks that are working on some kind of broader social change,” Iyengar says. “The programming and events are geared toward them. So everything from guest lectures, to panel discussions, meditation circles, personal finance coaching, workshops, community dinners—all kinds of events we have planned. We also do some broader community events where we want to get the entire neighborhood of Sweet Auburn attending. We want to keep that affordable or free, so the community can really benefit from it.”

Art abounds: Each suite includes a wall mural—or artistic accents, at least—by locals or artists from other cities who stem from underrepresented backgrounds. “Our whole aesthetic for the space is this balance between revitalizing and preservation,” says Iyengar. “I think that’s what’s going on in the neighborhood. That translates to our design in that it’s an old building that was preserved and internally it was gutted and redone.”

The majority of net profits will be channeled back toward creating free programing for the community. “And it’s not just, oh, come mingle for happy hour,” says Iyengar. “It’s programming that will help you with personal or career development. We’ll do free workshops or financial literacy training for the whole community. That’s some of the stuff we have in the works.”

Breakfast, anyone? Below co-living suites, the Atlanta Breakfast Club will operate a slimmed-down version of their downtown eatery, offering chicken and waffles and equitably sourced Guatemalan coffee.

As of early April, the initial member slots at Awethu House were claimed. “We’re now taking applications to be on a waitlist,” Iyengar says. “Some folks have only signed up for three or six-month memberships, so we might have availability coming up in a few months. But right now, we’re pretty booked.” 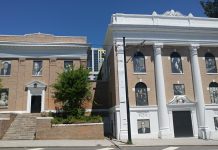