Atlanta’s reputation as a sprawling, unwalkable city may be taking a hike itself, thanks to pedestrian-friendly developments like the Atlanta BeltLine, Buckhead’s new Greenway, and the metro area’s abundance of mixed-use communities. Jen and Adam Freeman’s city lot enabled them to build a custom family home with easy access to destinations usually accessible only by car. “The PATH 400 trail is the biggest walking attraction for us, since our neighborhood backs up to it,” says Jen. “But we can also walk to Phipps and Lenox.”

The family of four—daughter Hadley is three, and son Bryce is one—wanted enough square footage for everyone to have their own rooms, as well as generously sized family spaces. Interior designer Lyndsy Woods helped pull the look together with special attention to the large combined kitchen and living area. “The main goal was that this one large room was functional with lots of seating, cozy, and not formal at all—very kid- and dog-friendly,” says Lyndsy.

Soft colors link all the rooms visually. “Jen was looking for a soft, subtle palette that had cooler tones,” says the designer. “We used pale blues and purple as the accent colors, with soft-gray walls on the main level.” Texture and sheen provide a lot of the interest, such as aged-wood ceiling beams, mirrored chests in the family room, and a glass tile backsplash in the kitchen. The couple commissioned custom art from friend Kristen Giorgi to be the focal point of the family room, tying in the blues and grays elsewhere in the house.

Adam, who is a residential real estate developer, preferred a kitchen layout that reflects his love of symmetry. Lyndsy added distinctive features such as a pewter range hood, chunky island countertop, and a hidden pantry that conceals an additional sink and dishwasher. “The pantry is a great place where they can keep baby stuff and a bottle station out of view from the main kitchen,” says Lyndsy. “Functionally, the pantry is important with the two littles in the house.”

For more texture, Lyndsy and the Freemans experimented with numerous washes to find the perfect patina for pecky cypress walls in the dining room. An elegant beaded chandelier provides a smooth contrast to the rustic wood grain.

With no formal living room and a dining room that takes a casual approach to entertaining, the Freemans’ house welcomes a new, more relaxed style of family living. “I think they’ve created an ideal urban retreat,” says Lyndsy, “with the best of everything: modern amenities, views from the backyard, and city access walking.”

This article originally appeared in our Spring 2017 issue of Atlanta Magazine’s HOME. 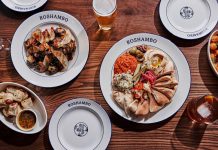 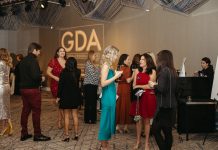 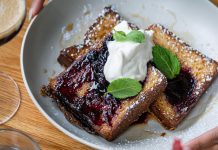