We rounded up the things that caught our eye, tickled our fancy, or sparked inspiration in 2019. Here’s your handy manual to the year in review, local design edition.

Worth the Drive: Steel + Plank

Longtime collectors Heidi and Ramsey Maune made their new Miami Circle gallery stand out from stiff competition by focusing on limited-edition prints and multiples by blue-chip contemporary artists. The opening exhibition in September made a big splash with pieces by uber-cool nonagenarian pop artist Alex Katz, including an original oil painting.

Atlanta scored a new auction house with the opening of Chicago-based Hindman on Miami Circle last spring. Since then, it’s sold Parisian haute couture worn by Olivia de Havilland and the Estate of Charles Ackerman, a collector and Atlanta commercial real estate developer. A Wilfredo Lam oil on canvas, a highlight of the Ackerman collection, brought in upwards of $200,000—more than four times the presale estimate. Someone else who’s sold? Michael Shapiro, former director of the High Museum, who serves as a senior advisor.

Just six months after British furnishings brand Julian Chichester (by the designer of the same name) opened its ADAC showroom, it doubled its 5,000-square-foot space due to demand. The eclectic offerings—case goods, upholstery, lighting—feel like the meeting of an 18th-century European estate and a clubby cocktail lounge. The showroom also offers a studio for creating bespoke furnishings.

One to Watch: Kevin Francis Design

Kevin O’Gara has been a local design fixture since he started his blog, Thou Swell, in 2013 when he was just 16 years old. Now 22, he’s got a bamboo silk, labyrinth-inspired rug collection under his belt and more than 20,000 Instagram followers. After studying interior design and hospitality management at Cornell University, he’s back in Atlanta to focus on Kevin Francis Design.

With a design by Cara Cummins of TaC Studios, Farrow & Ball paint colors, and Kravet fabrics, the Lola at Southern Dairies isn’t your average co-working space. Founded by Eileen Lee, a former corporate consultant, and Martine Resnick, who was a senior brand manager at Turner, the Lola is a women-only professional and social club with a podcast studio, private meeting rooms named after notable Southern women, a mothers’ area, and a chic powder room. “We were thinking women first—we wanted it to feel soft, feminine, welcoming, warm, and not like an office at all,” says Resnick. “We wanted it to feel like a members’ club or a nice hotel lobby.”

The old is new again as Englishman’s Fine Furnishings—a long-time resource for antiques and reproductions—adds a location at ADAC in addition to its original Vinings storefront. Clients can scout for historical pieces, customize them, or build something new to order. “Expanding to ADAC makes sense because it’s where designers go to shop in Atlanta,” says Anita Vreeland, president of marketing and design. The showroom, which stands among modern neighbors like Habachy Designs and Showroom 58, also showcases new additions like reclaimed wood flooring and barn doors.

After nearly 35 years on Huff Road, Atlanta’s go-to fabric shop Lewis and Sheron has relocated to a new 18,000-square-foot design center on Collier Road. “Our goal was to create a design center that changes the way people shop for furniture and fabrics for their home,” explains Sam Sheron of his vision for the next phase in the 75-year-old, family-owned company’s evolution. The center offers more than 40,000 yards of in-stock fabric, plus many thousands more to order from mills around the globe.

Influenced by French modern style, Atlanta interior designer Amy Morris released a new eight-piece lighting collection this year with Charleston-based manufacturer Avrett. “I often found myself challenging Avrett to make custom pieces at almost twice the size of what they had,” she says. “Eventually, owner Peyton Avrett approached me about a collection.” The fashion-forward offerings include geometric sconces and sculptural chandeliers that play with scale to add interest.

Take down this name. After years at boutique firm Square Feet Studio (best known for restaurants like Kimball House and the General Muir), and a stint at MT Studio (Mashburn, Brother Moto), designer Laura W. Jenkins struck out on her own. Since then, she’s rolled out designs for Alpharetta’s Restaurant Holmes (which features a howling wolf mural) and Never Enough Thyme (cheery and colorful). Her residential work is just as much fun.

Atlanta can add to its roster of top-notch interior and product designers with the arrival of Jessica Davis of Nest Studio and Atelier Davis from the New York City area. Her whimsical, artisan hardware, including colorful Bauhaus-inspired curved pulls, brass figurine knobs, and glazed ceramic pieces, can be found at Matthew Quinn Collection at ADAC West. Next up? Expect collaborations with local artisans, and an expansion of her interior design work in the area.

The man who wrote the veritable bible on kitchen design has done it again. This fall, Matthew Quinn of Design Galleria released the second volume of Quintessential Kitchens and Spaces (Parrish Press), three years after the first. Drool over stunning photography of 15 kitchens, plus baths, dressing rooms, pantries, laundry rooms, and bars in recent projects ranging from a Nashville Tudor renovation to a whimsical retreat in Vero Beach, Florida.

Shop Within a Shop: Tom Dixon at Switch Modern

With an expanded space dedicated to British designer Tom Dixon’s avant-garde creations at Switch Modern, Atlantans can see samples of all of his furniture and lighting in person. “It shows how impactful his work can be when shown in clusters of like designs,” explains store co-owner Doug Henderson. The Melt and Opal suspension lights hung in clusters are one such showstopper.

When the hotel got a series of interior overhauls in honor of its 10th anniversary, its restaurant, Atlas, landed the highlight: a sort of secret garden in a 3,000-square-foot solarium with retractable walls, designed by the Johnson Studio at Cooper Carry as a casual complement to the main dining room. Decor includes a floating bar with a laser-cut metal facade and a mosaic interpretation of Gustav Klimt’s unfinished Portrait of Ria Munk III in Italian glass tile.

It’s long overdue: With the opening of Curated Home Brands, Katrena Griggs is the first black female principal of a showroom at the 7.2-million-square-foot AmericasMart. The former vice president of Codarus launched her showroom softly at summer market, with plans for a grand rollout in January. Her 2,500-square-foot space hosts 12 lines of furnishings, bedding, and accessories, including the local SmithHonig’s splashy textile collection Boho Luxe and MooMoo Designs’ earthy global goods of horn, wood, resin, and bone. This year, Griggs was bestowed the Kimberly E. Ward Icon Award from the Black Interior Designers Network in honor of its late founder.

The local ceramics studio with the nationwide cult following, Courtney Hamill’s Honeycomb Studio, has expanded in a big way this year with the opening of a brick-and-mortar called the Clay Shop. Part workspace, part boutique, the new Chattahoochee Avenue shop carries not only Hamill’s own work—her famed gold-dipped bud vases and matte black plates—but also that of other artists, including L.A.’s A Ways Away and local artists like Courtney Tate’s Sandwich Shop. 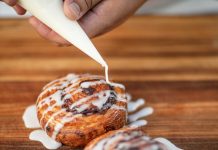 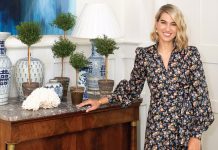 10 decor items you should have in your house, according to designer Clary Bosbyshell