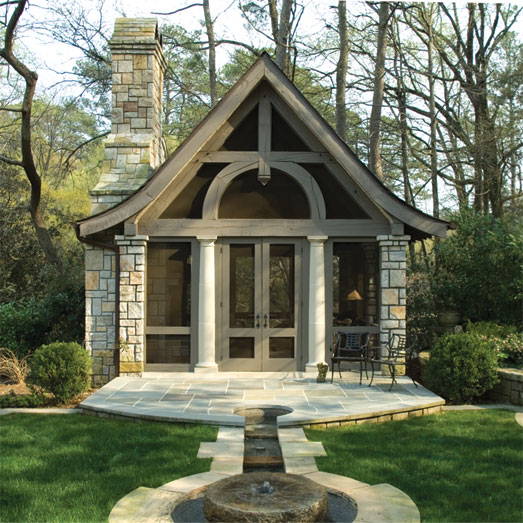 Kristine and Joe Hope’s summer house is not at the lake, it’s in their backyard. Architects Rick Spitzmiller and Robert Norris designed the freestanding structure after giving the Hopes’ house an exterior face-lift. “It’s all about the destination, a way to pull people into the garden,” explains Spitzmiller. “Ninety-nine percent of people might build a screened porch off the back of their house instead, but they would be missing something. It’s not quite the same.”

“When we bought our house twenty-six years ago, it was just about the ugliest house on the street, but the prettiest lot,” Kristine recalls. Their cozy backyard retreat was modeled after eighteenth-century “follies,” whimsical structures popular in French and English gardens. The architects originally proposed it as a pool house, but the Hopes nixed the pool and opted for a water feature instead—a narrow channel called a rill that leads to a gurgling fountain. Set on an axis with the main house, the summer house lures visitors through the Hopes’ one-acre-plus property.

The charming, understated facade—with its bell-cast eaves, double doors, and fieldstone accents—looks as if it were plucked from an English garden. By contrast, the interior is deceptively large, with a semi-octagonal wall that projects into the woods and offers an impressive view. Stone floors provide durability, vaulted ceilings enhance the sense of spaciousness, and screens keep out bugs. Although only 500 square feet, the little house is an ideal place to host a luncheon, watch a football game with the Hopes’ college-age children, or build a fire in the massive stone fireplace.

Joe often spends the day gardening, then starts a fire for evening ambience, reports his wife. “Even though it’s called a summer house, we definitely use it year-round,” says Kristine. “It is on the highest part of our property, up in the trees. It feels like you’re in the mountains.”