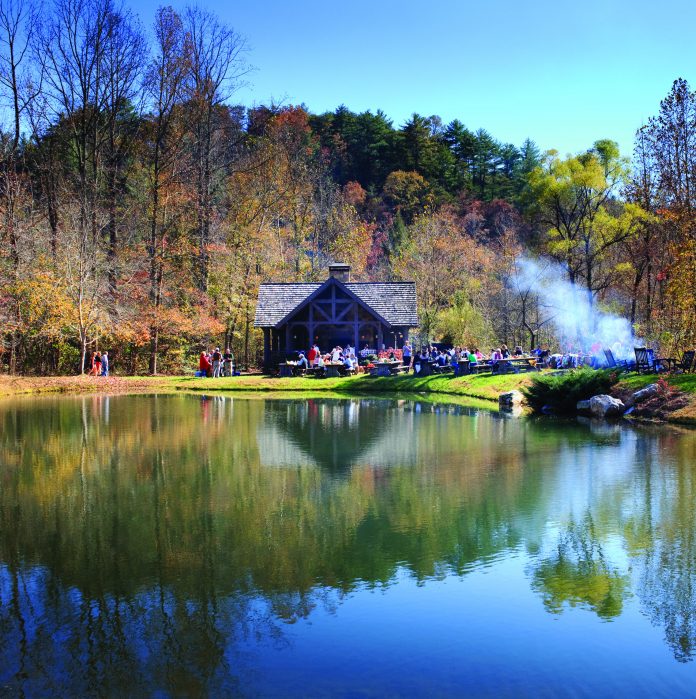 Photograph by Beall and Thomas Photography

When I told friends my wife and I were going to Blackberry Farm, I got one of two responses: “What’s Blackberry Farm?” and “Oh my God, I’m so jealous.” Both reactions are understandable. Blackberry Farm may be just four hours away in the misty foothills of the Tennessee Smoky Mountains, but it is, for all practical purposes, as remote and mystical as Xanadu. Last year Travel Leisure readers named it the number one resort in the U.S. and Canada. One wonders if the voters actually made their pick based on first-hand experience, given the place’s insane price tag and limited capacity (there are just sixty-two accommodations), or if they were convinced simply on the basis of its reputation, which seems to charm even the most jaded reviewers.

So what exactly is Blackberry Farm? Technically it’s a 4,200-acre resort and working farm whose crops yield much of the gourmet food that ends up on guests’ dinner plates each night. It is also a Thomas Cole painting come to life—a bucolic paradise designed to evoke a time and place that may never have existed. Here, horses graze languidly in green pastures, trout glide almost invisibly over the stones of Hesse Creek, and heirloom crops sprout in fecund rows. If that sounds twee, it is. But the allure of Blackberry is undeniable.

A half hour after we arrived, though, I was not pleased. Months earlier I’d reserved one of Blackberry’s twenty-two estate rooms, the cheapest accommodations. (“Cheap” is relative; an estate room for two, meals included, costs $845 a night.) Described on the website as “charming”—granted, marketing-speak for “small”—the size of our second-floor room was flabbergasting. Bathroom and closet excluded, I measured it roughly at nine feet by fourteen feet—so cramped I had to turn sideways to let my wife pass between the end of the queen bed and the wall. While the window framed a spectacular view of the valley and the mountains beyond, we could hear our neighbors through the walls, not to mention the stereo in the common room right beneath us, which, inexplicably, was playing “Hotel California” on a loop. Was this a joke?

I politely explained to the front-desk attendant that I was expecting something a bit more comfortable. While I browsed an array of cookbooks, including the resort’s own for $60 (which the New York Times described as “gastroporn”), he came back with an offer: a cottage for $1,095 a night, $500 off the peak rate. I took it. From that moment, ensconced in our expansive digs, with a wood-burning fireplace, Frette robes, heated bathroom floors, a fridge stocked with Häagen-Dazs ice cream bars, and a porch overlooking the woods, the charms of Blackberry Farm did their number on me.

The testimonials in the leather-bound volume near the four-poster king bed told me I wasn’t alone. A couple from Illinois explained with a smiley face that “we are forgoing our children’s college educations to come back.” I learned what they meant. Blackberry is a place where you can do as little or as much as you’d like. We took fly-fishing lessons from the affable Dusty, who taught us the overhead cast, the roll cast, and the side cast ($448.88). I hiked about half of the ten miles of mountain trails (free!) while my wife went to the spa for an expectant-mother massage ($198.79). One morning I toured the grounds ($115.43) with Jim Sanford, a former elephant trainer who now oversees the Farm’s Lagotto Romagnolos, dogs with an uncanny knack for sniffing out truffles. (Blackberry will sell you a puppy for $3,000, but there’s a waiting list.) The previous afternoon we took one of the Farm’s Lexus convertibles (free!) to nearby Cades Cove, a gorgeous eleven-mile loop through the national park that—be warned—is gridlock on fall weekends. Fortunately the staff stocked the car with a picnic lunch before we went.

Which leads me to the meals. Blackberry’s reputation as a foodie paradise is well earned, thanks in part to owner Sam Beall, a chef himself by training. If you’re fortunate enough to visit Blackberry, do not miss a single meal. And not just because it’s included in the cost (alcohol extra), but because it would be a mortal sin to deny yourself. Dinner is served in a bank-style barn with subdued lighting and menus that change daily. I still wake up nights pining for the wild mushroom risotto. Even breakfast felt special: Fried farm eggs with bitter greens and roasted garlic rice, anyone?

One afternoon on a mountain trail, I ran into an Atlanta couple hurrying back for that night’s outdoor barbecue and bluegrass dinner in the quaintly named Yallerhammer pavilion. A meal “perfectly suited for your boots and jeans,” Blackberry’s daily newsletter crowed. Alas, I hadn’t packed boots. And it was $250 a person extra.