Focus Religion, Politics, Activism
Age 45
As senior pastor at Ebenezer Baptist Church, the rousing orator preaches from the pulpit the Reverend Martin Luther King Jr. once occupied and holds an influential position in one of Atlanta’s most important black churches. His work, extending well beyond the historic house of worship, has included progressive activism inside the Gold Dome on issues such as voting rights and Medicaid expansion. He’s now deciding whether to transition from protests to politics as he considers a potential 2016 U.S. Senate run against Johnny Isakson.

Mission for Medicaid In March 2014, Warnock helped lead a high-profile rally inside the state Capitol to urge lawmakers to stop opposing Medicaid expansion. He was one of 39 people arrested that day. 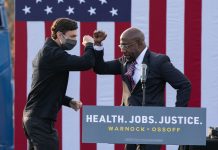