For our January 2021 issue, in honor of our 60th anniversary year, we dug through our archives to present a snapshot of the magazine during each of our six decades. We discovered groundbreaking work, inspiring stories, and, yes, some errors in judgement. Here’s what we found:

The decade of big hair and big schemes

“The state government plays a crucial role in how Georgia will succeed as a film center. I think the state really has to sell what it has. Let the production industry they want to attract know that there is a welcome mat out, that there’s governmental structure supporting their needs, and that it is friendly to them.” —Ed Spivia, the first head of the Georgia Film Commission 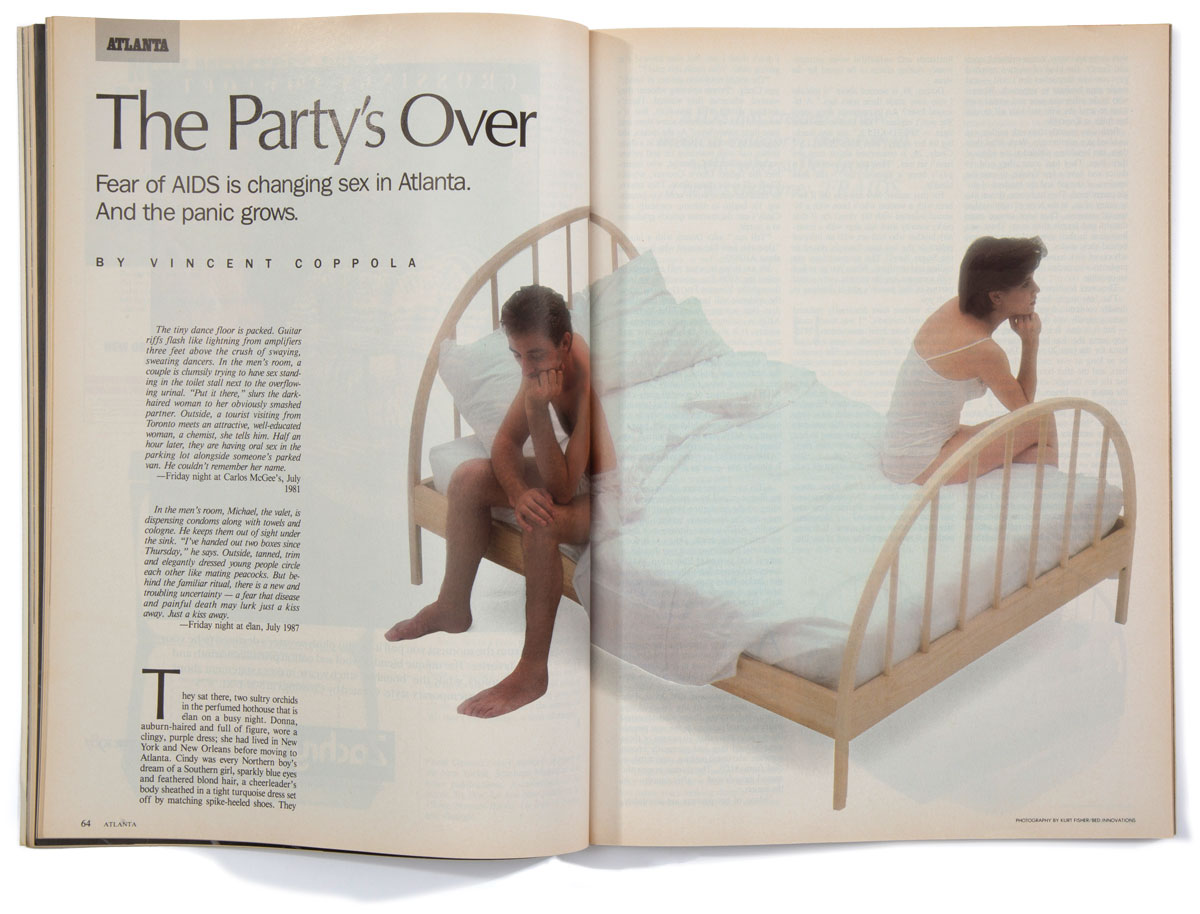 [AIDS] is threatening the nonstop party that has been underway in Atlanta for the past 20 years. The lines may be as long as ever outside the Buckhead bars, and the after-hours action as frantic, but the last thought after the last drink on the couch is no longer, “Will he respect me in the morning?”

“In the past, your pride was hurt,” says Donna. “Now, you can die. . . . It’s not that my morality has changed. My dread of the A-word has increased.”

AIDS—acquired immune deficiency syndrome—is a disease that reaches beyond its victims. It has created a new medial category, the worried well, who suffer from a new syndrome: ’FRAIDS.”

“I have lived along this river for 20 years and have seen many changes take place. I grew up playing in clear creeks and forested areas; now, these creeks are the true color of Georgia red clay, and the forests are apartments and shopping centers. Every child needs to have the chance to play like Tom Sawyer, Huck Finn, and Becky Thatcher. . . . But we are rapidly losing that opportunity. The Earth is the Lord’s, on loan to us. Let’s not destroy it.” —Biologist Allison Winter, testifying before the U.S. Senate on behalf of the Georgia Conservancy and the Chattahoochee River Coalition

There is a line one hears repeatedly in the inner enclaves of Ted Turner’s empire: “Whatever Turner wants, Turner gets.” It is half ironic and half dead-serious, a reflection of the awe and terror and occasional comic relief the man inspires. Sloe-eyed, willful, alternately charming and petulant, Turner is one of those figures who looms larger than life. He has the wealth and the power and the single-mindedness to conceive projects which would make more ordinary mortals shudder in disbelief.

We got it right

Sometimes we made (mostly) the right call

In 1988, Atlanta was preparing to host the Democratic National Convention. Bill Shipp wrote his monthly column about potential sources of embarrassment. He first called for removing statues of Tom Watson, the “father of rural free-delivery mail service” who also inspired the lynching of Leo Frank, and General John B. Gordon, former governor and U.S. senator but also leader of the Ku Klux Klan—both of which then stood at the Capitol. Also, the DNC had already expressed outrage over the state flag, which then incorporated the Confederate battle flag. Since then, Georgia has adopted a new flag, and Watson’s statue has been moved. But as recently as last summer, Gordon’s descendants were still asking Governor Kemp to remove their ancestor’s statue. In a less perceptive moment, Shipp also expressed embarrassment over Jimmy Carter, and that’s where history has proved the columnist wrong. He did concede, “Some political scientists contend that merciful time has rehabilitated Jimmy Carter’s presidency.”

“The Resurrection of Midtown”
March 1981

Midtown is Atlanta’s truly urban neighborhood. It is not homogenized or carefully planned or even charming. It is an unorganized concoction of grand old homes, modest dwellings, of small shops and new towering office buildings, of dilapidation and renovation, of wide avenues and narrow streets. Its people are as diverse as its appearance; its history one of middle-class respectability and notorious disrepute. Best of all, it has a future. —Judith Schonbak

We got it wrong

And a couple of cringe-worthy cover stories

In March 1985, our cover story was “Atlanta’s Civil War Heritage: A Four-Part Special,” with Rhett and Scarlett lookalike models. The package included a story on reenacting the Battle of Jonesboro, a primer on the battle of Atlanta, tips on collecting Civil War relics, and a wedding with women in hoop skirts and men in full Confederate and Union uniforms, beneath a ragged Confederate flag.

In April 1989, we featured “hot” Atlantans, starting with our cover model Kim Basinger. Others on our list: Dr. Johnetta B. Cole (then new at Spelman), Paul Coverdell, folk artist Howard Finster, Dr. Louis W. Sullivan, R.E.M., Andrew Young. Sure, some of these people are admirable, but hot?

The domestic pot trade in Georgia has increased recently both in terms of amounts grown and revenues generated.

By Michael Malloy | Originally published in April 1981 and excerpted here:

It is a blisteringly hot South Georgia afternoon in late August. The four-wheel-drive Scout hammers us along some unnamed Down Home County dirt road. We are hubcap deep in pulverized red clay, and the crimson dust is so thick it’s making the gnats cough.

The Scout is being driven by Pete Thomas, a reconstructed good ol’ boy who is current chairman of the Down Home County Businessmen’s Alliance, a sort of rural chamber of commerce. He is in his late 30s, white, married, and a political conservative. His two teenage children attend a private, church-affiliated school.

Pete is also a True Believer in the free enterprise system and owns a small chain of dry-cleaning stores in a three-county area around and including Down Home County.

In addition to his income as a small businessman, Pete earns a substantial amount of money each year working as a commodities broker—or more precisely, a commodity broker. He handles the marketing of one crop grown in Down Home County: marijuana. Pete’s brokering helps keep Atlantans who smoke pot sufficiently stoned. . . .

We get out of the Scout and walk in the garden. While Pete checks a plant here, pulls a weed there, I stroll among the plants and marvel at the busy, maturing kolas (tops). The buds are reddish-brown with tiny flecks of purple and an overall light-green color. Like a miniscule rainbow. Lots of miniscule rainbows. There’s no doubt whatsoever these plants are being cared for, worked with, prayed over; no toss-in-a-handful-of-seeds-and-see-what-grows in this garden. When these plants are harvested, the quality will be Outer Space And Beyond. This is, in other words, some Dynamite Weed.

“We got the original seeds from Mendocino County, California,” Pete says. “The growers there assure us it was originally from Hawaii.”

Hawaii: surfers, tourists, and exceedingly powerful marijuana, the legendary “Maui-Wowie.” And Pete’s proud of the fact it’s being grown right here in the heart of Dixie.

Can a woman reach the top in Atlanta?

Our answer was “yes.” But we advocated for an oddly “feminine” strategy. 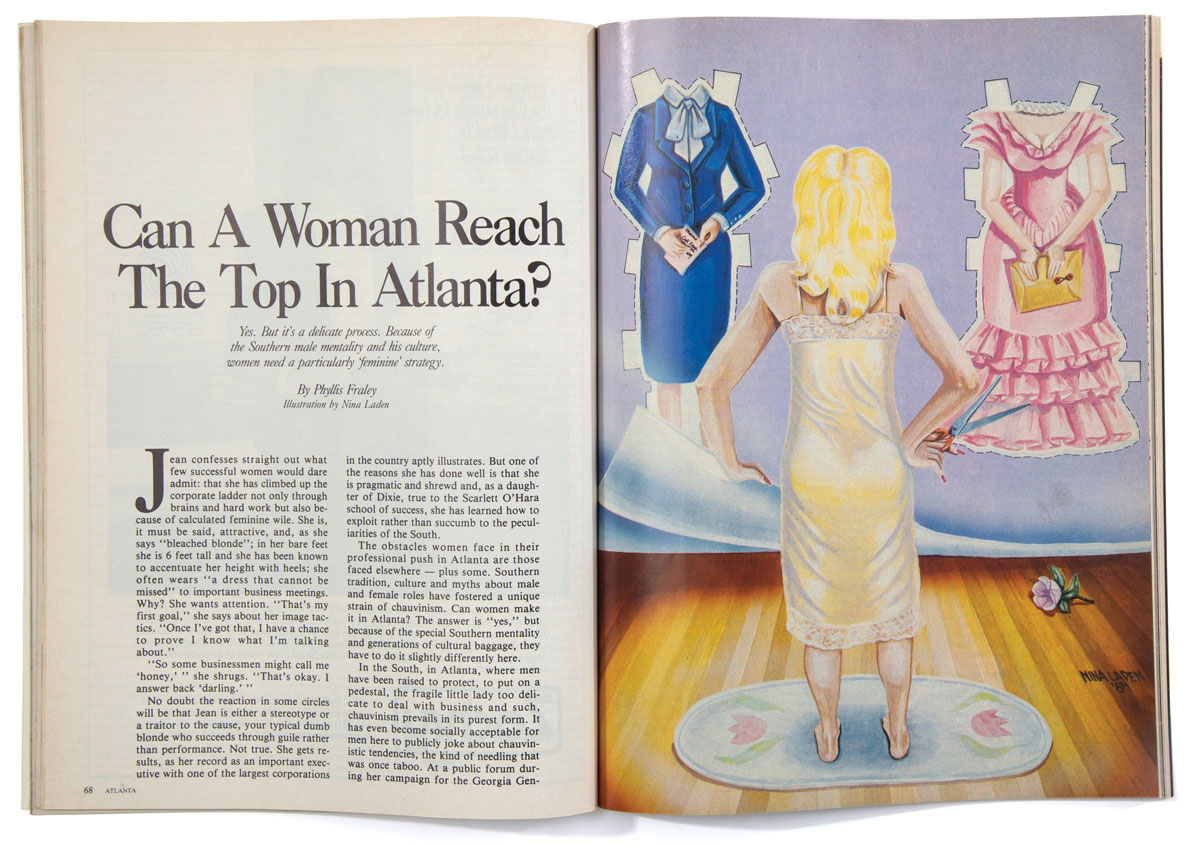 By Phyllis Fraley | Originally published in October 1984 and excerpted here:

Jean confesses straight out what few successful women would dare admit: that she has climbed up the corporate ladder not only through brains and hard work but also because of calculated feminine wile. She is, it must be said, attractive, and, as she says “bleached blonde”; in her bare feet, she is six feet tall, and she has been known to accentuate her height with heels; she often wears “a dress that cannot be missed” to important business meetings. Why? She wants attention. “That’s my first goal,” she says about her image tactics. “Once I’ve got that, I have a chance to prove I know what I’m talking about.”

No doubt her reaction in some circles will be that Jean is either a stereotype or a traitor to the cause, your typical dumb blonde who succeeds through guilt rather than performance. Not true. She gets results, as her record as an important executive with one of the largest corporations in the country aptly illustrates. But one of the reasons she has done well is that she is pragmatic and shrewd. . . . As a daughter of Dixie, true to the Scarlett O’Hara school of success, she has learned how to exploit rather than succumb to the peculiarities of the South.

Toughest Jobs in Atlanta
All remain a challenge—well, except for proofing the phone book. (April 1987)

Buildings Worth Saving
All have survived except the Farlinger Buliding. (January 1987)

Cheesecake
Best: Katz, 2205 Cheshire Bridge Road. Cloudt’s had support, but Katz’s cheesecake has more guilt, which is, after all, what good cheesecake is about.
Worst: Any frozen cheesecake. They taste like padded bras.

Place to Get (a) Coke
Best: The Robert Woodruff Lounge at Emory
Worst: Ham Jordan’s Apartment

Women’s Clothing Store
Best: Saks Fifth Avenue. It costs an arm and a leg, but the fit and the look are so good no one will notice they’re gone.
Worst: Frederick’s of Hollywood, Cumberland Mall. Where Charlie’s Angels go to die. 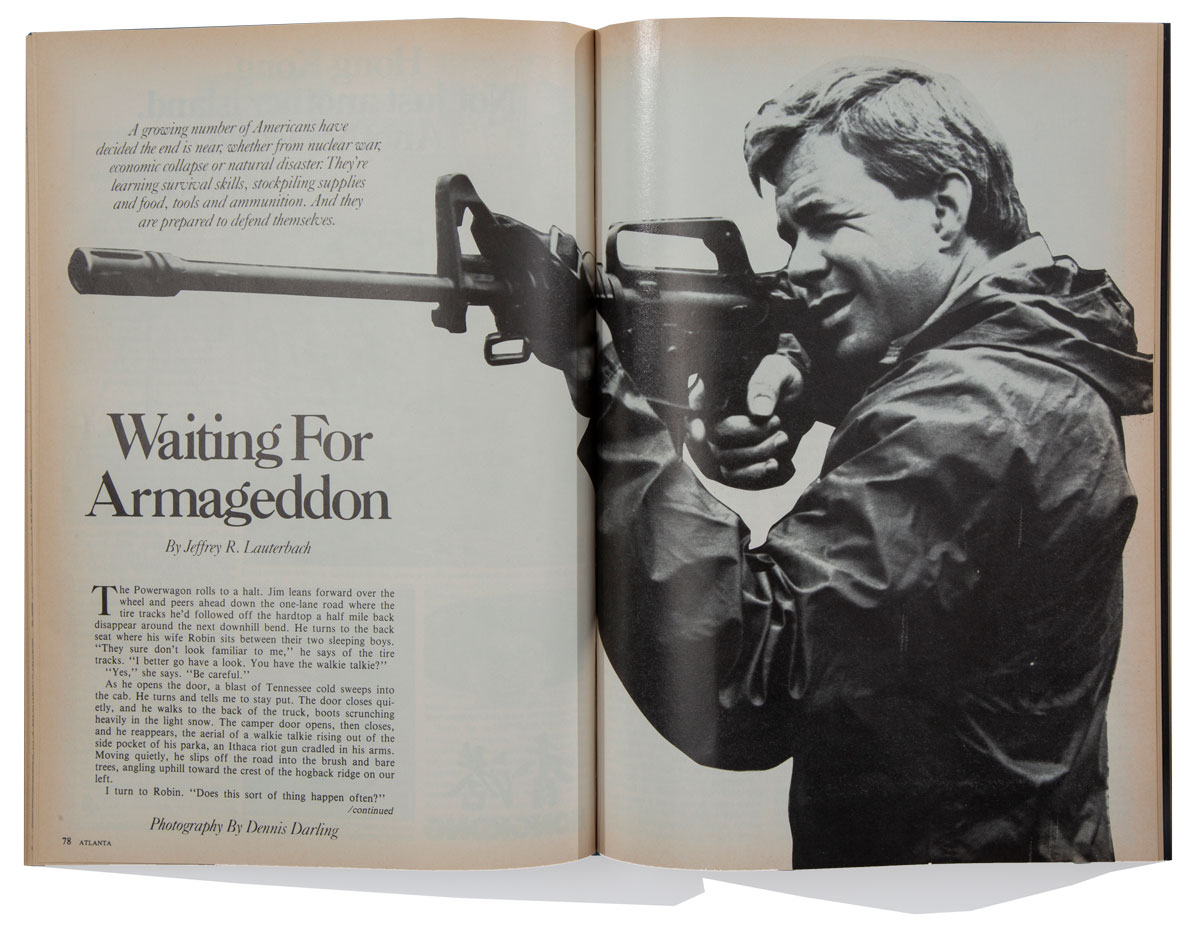 A growing number of Americans believe the end is near, whether from nuclear war, economic collapse, or natural disaster. They’re learning survival skills, stockpiling supplies, tools, and ammunition. They’re ready to defend themselves.

The Powerwagon rolls to a halt. Jim leans forward over the wheel and peers ahead down the one-lane road where the tire tracks he’s followed off the hardtop a half mile back disappear around the next downhill bend. He turns to the back seat where his wife Robin sits between their two sleeping boys. “They sure don’t look familiar to me,” he says of the tire tracks. “I better go have a look.” As he opens the door, a blast of Tennessee cold sweeps into the cab. He turns to me and tells me to stay put.

I turn to Robin. “Does this sort of thing happen often?”

“No,” she replies. “Jim’s just being careful. . . . It’s taken years to build up the supplies we have down there.”

Their supplies: food for a year, bottled water for months, books, tools, ammunition, seeds—all geared to self-sufficiency. No doubt about it, Jim and Robin are very serious about survival; and just like other Atlantans I’d tracked down over the past few months, they believe at the core of their beings that life as we live it today won’t last much longer.

He is one of a growing number of Americans who have decided that ultimate disaster lies just over the horizon. If the recent success of Georgia businesses geared to survival is an indicator, then getting ready for doomsday has indeed become an increasingly popular activity.

—Writer Jeffrey R. Lauterbach traded a day of labor for an inside peek at a survivalist family’s well-stocked retreat in Tennessee.

This article appears in our January 2021 issue. 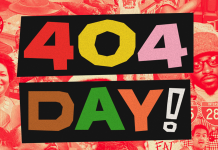 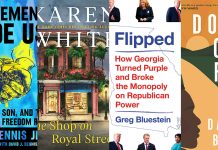 Spring reading list: 10 new books by or about Georgians