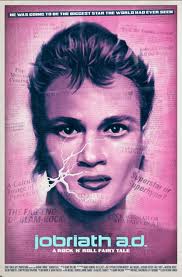 There’s a moment in director Kieran Turner‘s riveting new documentary “Jobriath A.D.” when, if you can look past the spaceman suit, the crazy elf ears and  the fact that “Midnight Special” guest host Gladys Knight butchers his name as she introduces him on the late-night NBC concert series, you can see a rock star blazing to life. Unfortunately for Jobriath, the talented kid born Bruce Wayne Campbell in King of Prussia, Pennsylvania that life would be short lived. The immaculately researched doc screens Thursday at 6:15 p.m. at Landmark Midtown Art Cinemas.

Signed to Elektra Records in 1973 as an ultra hyped glam rock star and the American answer to David Bowie, Jobriath never lived up to the towering Times Square billboard pronouncing his arrival. But unlike Bowie, who titillated fans by flirting with androgyny and bisexuality, Jobriath came out publicly as gay, labelling himself “The True Fairy of Rock n Roll.” In an era when Elton John was privately sleeping with his manager John Reid but publicly claiming to be bisexual in the pages of Rolling Stone, this was career suicide. Especially in a post-Stonewall America where gay men were embracing the more masculine-minded wardrobe of leather and Levis and dismissing the more effeminate gays sporting eyeliner in the clubs.

“I had always heard of Jobriath but, like a lot of people, I considered him to be a joke,” Turner tells Atlanta magazine. “The images of him just looked very silly. And then I heard the music. I was blown away by how good it was and I immediately wanted to know why he was not acknowledged by the LGBT community as this groundbreaker. Here was this guy who 40 years ago, just four years after Stonewall, who said, ‘I’m openly gay.’ “

In both his songs like “I’m a Man,” where he lyrically challenges the accepted norms of masculinity in a soaring falsetto as electric guitars blare behind him, to his gatefold debut album cover inspired by ancient Roman statues, Jobriath quite literally put his ass out there. “Jobriath’s music came from exactly who he was,” says Turner. “Unlike Lou Reed, The New York Dolls and Bowie who were dressing a little more effeminately on stage as part of the act, this is who Jobriath was and his music reflects that.”

And while the performer himself isn’t around any longer to speak for himself (after reinventing himself as cabaret performer Cole Berlin, Campbell died at his piano from AIDS in in his rooftop Chelsea Hotel apartment in 1983. His body was not discovered for four days), his former manager Jerry Brandt immediately becomes the most fascinating and complicated figure in the doc. In the film, Turner introduces the man who professes to bringing the Rolling Stones to America and discovering Carly Simon with the strains of Curtis Mayfield‘s “Pusherman” percolating on the soundtrack. Brandt is widely credited and blamed for the orchestrating the hype machine that ended up tanking Jobriath’s career. After the performer’s second album, “Creatures of the Street” failed to gain traction in 1974 and an ill-fated Nassau Coliseum show ended when the crowd began yelling “faggot!” at Jobriath on stage, the pair bitterly parted ways.

“I never felt like Jerry was the villain of the piece,” Turner explains. “I felt like he had made a lot of wrong choices and was out for himself as much as he was for Jobriath but I never felt like he was malicious. He had the right idea but he just executed it incorrectly. There were so many other forces at play that to point the finger solely at Jerry for this monumental failure would be incredibly reductive. It would be too easy to make it all Jerry’s fault.”

Turner hopes his documentary, along with Jobriath’s two resurrected albums now available on iTunes, will result in audiences discovering a long-forgotten piece of GLBT history. Or as Scissor Sisters frontman Jake Shears assesses in the film: “Maybe the reason why he died artistically and physically is so people like me could go on and be happy being an artist.”

Says Turner: “The younger generation, straight, gay or whatever, isn’t interested in history and has no attention span whatsoever but I’m concerned that the younger GLBT community in particular has no interest in their history, more so than any other younger minority group. That really bothers me. We need to be out there telling our stories. I made this film for our younger generation, to let them know about this person who kicked down the doors for so many other artists and made it possible for performers like Adam Lambert or a Ricky Martin to have a successful career while remaining true to yourself. Hopefully, this will jump start their curiosity.”