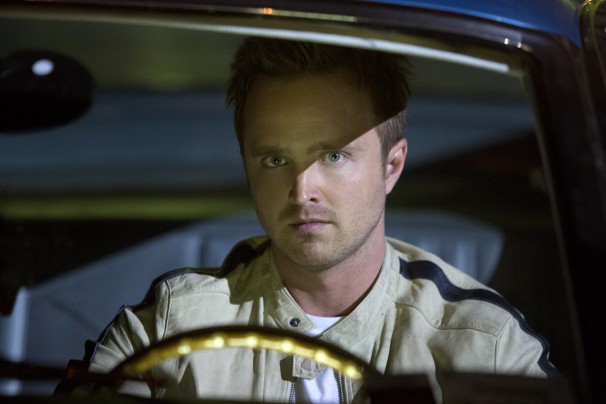 In other words, Dame Judi Dench is not in this motion picture.

Shot in Columbus and Macon with a Stone Mountain auto body shop standing in for the flick’s fictional Marshall Motors and a restaurant sequence shot at STK in Midtown, Need for Speed is a fun way to kill two hours and a tub of popcorn. If you go for the cuticle-chewing race sequences. Waugh (whose father Fred was a stuntman who helped crash 200 cars during the making of the 1980 John Belushi/Dan Aykroyd comedy The Blues Brothers) was adamant about not using any computer-generated crashes in the film.

“We crashed north of 50 cars,” Waugh ticked off during a recent visit to Atlanta with Paul and Mescudi to discuss the film. “We crashed 13 super cars, seven Mustangs, 12 cop cars, and a [expletive] load of pedestrian cars. It was awesome.” Need for Speed is Aaron Paul’s big-screen followup after wrapping the finale of the critically acclaimed AMC drama series Breaking Bad last year. He talked to Atlanta magazine about his transition from playing troubled meth-fueled Jesse Pinkman to portraying troubled gasoline-powered Tobey Marshall.

Q: After watching this film’s opening sequence, I’m surprised Macon remains on the map. How long did that race sequence take?

A: Thank God Macon totally supported what we were doing out there. We did nothing but night shoots. It took a little over a week to shoot that entire racing sequence. We left skid marks everywhere.

Q: Was there a part you as an actor, just shaking your head and thinking, “They’re actually allowing us to screw up this really picturesque small Southern city?”

A: Yeah, as a human being, I couldn’t really believe we were doing what we were doing. But it was so great. In between the camera angles, there were all these local people just hanging out and watching us destroy the place. They seemed to really love it.

Q: How much pressure did you put on yourself selecting a big screen feature that would follow up the Emmy-winning work you turned in on Breaking Bad?

A: I’ve always tried to be as picky as possible, but there were those points in the career where you just had to take a job to pay the bills. With this, the first thing after Breaking Bad, it was part business move on top of something that was fun to do. My inner 12 year-old helped me make the decision. I’ve loved cars since I was a little kid. I always wanted to have my uncle take me around in his classic ’67 Mustang. Getting to drive these amazing machines all around the country was very exciting to me.

Q: Any regrets that your character Tobey doesn’t get to share any screen time with Batman himself, Michael Keaton in this film?

A: Oh my God, yes! I got to hang out with him for a little bit. We never shared any screen time but he does such a great job in this movie.

Q: There’s a horrifying crash in this film that closely mirrors the real-life accident that claimed the life of Fast and Furious actor Paul Walker. Need for Speed was shot well in advance of his death, but what are your thoughts about the similarities of the two crashes and how audiences might react?

A: It’s a reminder that driving cars like this just is not safe. If you want to drive fast, you can go to a closed course and not put anyone else in danger. It’s a very sad reminder that we lost an incredible person last year.

Q: During the shoot in and around Atlanta, what were your haunts?

A: I had never been here before! Pizza is my all-time favorite so Antico Pizza, as far as I’m concerned, is the best pizza on the planet. I loved Sotto Sotto and the Optimist too. Shooting here, you have such a picturesque backdrop to everything. I loved going up and doing the scene at [the Swan Drive-In]. It’s so nice that it still exists and people still go and support it.

Q: Scott Waugh really shot this film through the perspective of a stuntman. The audience can smell the exhaust. Did the idea of doing this throwback racing movie without all the CGI work appeal to you?

A: Absolutely. That’s what got me excited. Plus, there was a story to play aside from all the racing madness in the film. Scott was really intent on doing a throwback car culture movie. Growing up, I was such a fan of Steve McQueen. Back then, they didn’t have CGI so they were forced to do their own stunts. Today, the audience is so used to being lied to. With this, we wanted people to say, “Oh my God, they actually did that!”