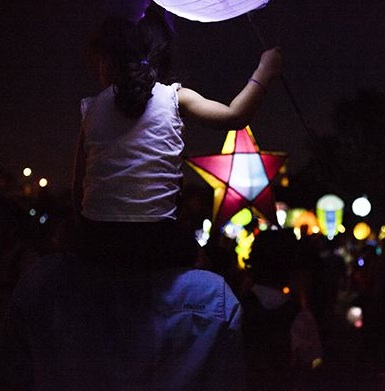 “It’s stuff like this that reminds me why I love Atlanta,” remarked a friend. “Where else do you have a parade where everyone can just join in?” Indeed, Saturday night’s Lantern Parade—the kickoff to Art on the Atlanta BeltLine 2013—embodied the best of intown Atlanta’s charming eccentricity and warm hospitality.

Officially the parade was headed by the giant lantern puppets and rowdy performers of the Atlanta Krewe of the Grateful Gluttons with the venerable and quirky Seed & Feed Marching Abominable band taking up the rear. But the real joy came from the 1,000-plus regular folks who marched in the middle, some toting exquisite lanterns they crafted in special workshops, others just wrapped in glow necklaces or toting flashlights. Dozens more, like my group, simply crashed the parade as we made our way along the trail, which was lined by tailgating well-wishers. People cheered from overpasses and the rooftops and decks of lofts and townhomes.

Amid the cluster at Irwin Street before the parade started, I spotted BeltLine mastermind Ryan Gravel standing off to the side, beaming beatifically. And why not? It’s one thing to theorize that old rail-lines could be used to re-connect neighborhoods, but it’s quite another to witness that community connectivity in such spirited form.