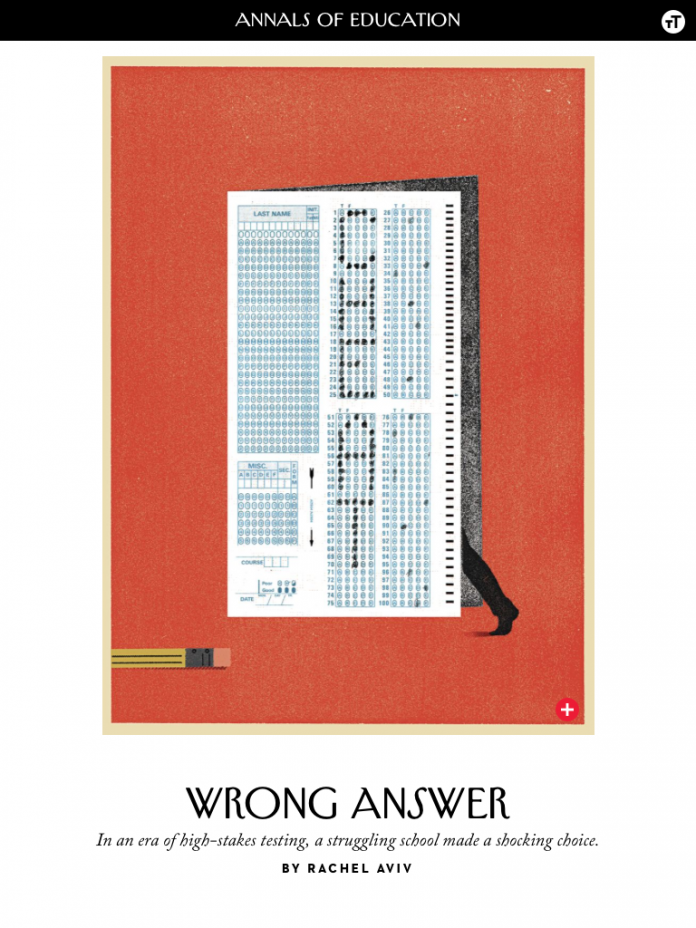 Rachel Aviv in The New Yorker on the APS cheating scandal
In all the news accounts of cheating in the Atlanta Public Schools system, the personal toll on the teachers who felt forced to cheat has often been overlooked. In this compellingly readable piece, Aviv chronicles what happened at one school—Parks Middle—through the story of one teacher, Damany Lewis. (You may recall his name from this salient detail that came out in testimony: Lewis was the teacher who admitted to swiping a test booklet from a sealed packet and later using a cigarette lighter to reseal the plastic.) Aviv shows the pressure that teachers and principals experienced in a system whose superintendent, Beverly Hall, counted test scores above all. Writes Aviv:

Hall belonged to a movement of reformers who believed that the values of the marketplace could resuscitate public education. She approached the job like a business executive: she courted philanthropists, set accountability measures, and created performance objectives that were more rigorous than those required by No Child Left Behind, which became law in 2002. When a school met its targets, all employees, including bus drivers and cafeteria staff, received up to two thousand dollars. She linked teacher evaluations to test scores and warned principals that they’d be fired if they didn’t meet targets within three years. Eventually, ninety per cent were replaced. She repeated the mantra “No exceptions and no excuses.”

Michael Daly in The Daily Beast on Alix Tichelman, the “black widow of Silicon Valley”
There’s been a rush to learn more about Tichelman, the twenty-something Atlanta call girl allegedly involved in the heroin death of Google executive Forrest Hayes. Daly’s pulled together the most readable account to date (although, there is a danger in rushing the reporting on a longform piece like this; I’m sure our friends at Creative Loafing take umbrage with being called “Casual Loafing.”) Everyone wants to know about Tichelman, and Daly provides a sensational introduction:

The detectives discovered that the woman was an enthusiastic poster on social media who went by the online name AK Kennedy. The Twitter handle @AKKennedyxx produced her real identity: Alix Tichelman, aged 26. Her profile described her as a “makeup artist/model/stylist/hustler/writer/baddest bitch/exotic dancer.” The tattoos in the posted photos confirmed that the 26-year-old Atlanta native was indeed the woman in the video, as did a fingerprint she had failed to wipe off the wine glass.

Tom Junod in Esquire on the pit bull
In the August issue of Esquire, the magazine’s Marietta-based writer-at-large has pulled off double feats: He’s sparked outrage among fortysomething women and their supporters and won the allegiance of pit bull-owners and their defenders. As a woman of 48 who counts Junod as a friend, I’ll let you draw your own conclusions about the former piece. When it comes to the latter, Junod crafts a cogent (and at times gutwrenching) defense of the pit bull, primarily told through the stories of his own dogs. The feature focuses on shelters and rescue groups in metro Atlanta and includes a heartwarming gallery of merry-looking pits. Junod writes:

Read: The State of the American Dog

Rodney Carmichael in Creative Loafing on street art misappropriation
Not everyone is happy when murals are installed on walls or vacant buildings in their neighborhoods. But plenty of folks appreciate street art, including, it seems, corporations behind big new developments. As Carmichael writes:

In the ephemeral world of street art, respect is hard to earn. Between graffiti taggers, neighborhood vigilantes, and out-of-touch city governments that make little differentiation between fine art and vandalism, it’s no wonder practitioners can get sensitive about their craft.

So when a local enthusiast broke the code of the streets by appropriating the work of several such artists for a corporate entity without providing credit or compensation, he earned himself a digital beatdown.

Finally, a plug for a story from our pages:
Christine Van Dusen’s “Foul Territory,” which will appear in the August issue of Atlanta magazine and was published online this week, includes an exclusive interview with Fred Fletcher, who made the agonizing decision to sue the Atlanta Braves after his young daughter’s skull was fractured in 31 places after being hit by a foul ball at a 2010 Braves-Mets game. As Van Dusen writes:

At a typical major league game, between 35 and 40 batted balls fly into the stands. For many fans, this is as much a part of the experience as beer and peanuts. They bring their weathered gloves and wait for a ball to loop lazily in the sky before plummeting toward the seats. Line drive foul balls are different. In humans, there is no such thing as an “instant” response; what we see must be interpreted by the brain, and that process can take a tenth of a second. If a ball is traveling at 100 miles per hour, it will have already covered a dozen feet before you even realize it’s headed toward you. That, of course, assumes you’re actually paying attention. Even professional baseball players, paid millions of dollars for their reflexes and hand-eye coordination, get clocked once in a while. (And they have a healthy fear; in June, San Diego Padre Alex Torres became the first pitcher to wear an MLB-approved padded helmet, a year after a former teammate was struck on the mound.)

Postcript: Mayor Reed’s Twitter blocks
One of my picks for last week was a guest column in Creative Loafing on the APS-BeltLine dispute over TAD payments. Evidently, Mayor Kasim Reed did not share my enthusiasm for the piece and had his staff draft a release critiquing the article. The mayor also blocked Creative Loafing news editor Thomas Wheatley and reporter Max Blau on Twitter. As Wheatley and Blau quickly realized, they are not alone in being placed in a social media time out by Hizzoner.

Read: Your handy guide to the journalists that Mayor Kasim Reed has blocked on Twitter