If you step off the elevator on the basement floor of Lutheran Towers, the senior residential community in Midtown, you’ll find what looks like a little New York-style bodega, minus the cat. In fact, it’s a grocery store: a free grocery store—stocked with everything from fresh vegetables to laundry detergent—and open to residents of the Towers to do their shopping once a week.

The grocery, which opened in January, is a new partnership between Lutheran Towers and Goodr, a local startup specializing in sustainable food waste management. Goodr is at once a consulting company, helping large places like Hartsfield-Jackson Atlanta International Airport find better solutions for surplus food, and a feeding program, by connecting that surplus food to communities experiencing food insecurity.

Goodr is helmed by Jasmine Crowe, who grew the company out of a one-woman project, hosting pop-up restaurants for people experiencing homelessness in Atlanta. Crowe told Atlanta that, after a video of one of her pop-ups went viral, “People were saying, This is amazing, who donated all this food? And the truth was, nobody was, I was just couponing, price-matching, and cooking all the food myself.” She realized if she could get the food donated, she could scale the project, and Goodr was born.

According to the Environmental Protection Agency, up to 40 percent of the American food supply is never eaten, leading to 133 billion pounds of wasted food. Meanwhile, the USDA estimates that more than 38 million people in the U.S. live in households experiencing food insecurity, which means they don’t have reliable access to nutritious, affordable food.

Goodr’s model is based on the belief that those crises are not only related, but that each can help solve the other. In a TEDTalk Crowe delivered in 2019, she said, “Hunger isn’t an issue of scarcity; it’s a question of logistics.”

To achieve this, Goodr employs tech wizardry worthy of a startup, with an app for partner companies to schedule surplus food pickup, and logistics consulting to help organizations reduce landfill waste. The donation of excess food is tax-deductible for partner companies, not to mention the dose of superlative PR.

On the other end, that surplus goes to Goodr’s feeding programs, including meal delivery and student feeding initiatives. To stock the grocery stores, Goodr partners with major brands like Kellogg’s, Pepsi Co., and Amazon to purchase discounted food and home goods. Fresh produce is often procured through partnerships with local farmers.

“It brings back dignity and independence,” said Alexandria Giles, Lutheran Tower’s director of supportive services, on our tour of the on-site grocery store. “A lot of our residents are aging in place, so being able to go to a grocery store right here where they live is really special.”

When I mentioned Giles’s point about the dignity of grocery shopping, Crowe told me that’s a bedrock principle of how Goodr functions. “That’s our whole model. We’re really big about giving people the respect they deserve then they’re experiencing food insecurity.”

Apart from the fact that no money is exchanged, the experience feels much like a regular grocery store: on my recent visit, a bakery shelf was lined with bags of English muffins and bagels, while a cooler was stocked with bacon, butter, and—for the ultra-hip silver set—almond milk. Crowe explained that what’s on offer at each grocery store varies depending on who’ll be using it: Goodr’s other grocery in Atlanta is in a middle school, and offers more snack items and foods that kids can prepare themselves, while the Lutheran Towers store has more cleaning items and sugar-free foods.

One thoughtful touch you won’t find at your average grocery: a recipe nook, featuring a computer for research, stacks of cookbooks, and vintage-style recipe boxes stocked with ideas. Crowe explained, “Seniors still love to cook. I saw a video about a man who started baking when he turned 90. I thought that was so cool! Why not give them different recipes to try?”

From day one, Lutheran residents were thrilled about their new grocery, said Leisa Minor, Lutheran’s manager of supportive services. “Seeing it all, it really brought them to tears,” she said. “A lot of these residents have endured a lot.” A majority of residents are low-income, many relying on $15 a month in food stamps to meet their grocery needs. “This helps a lot,” Minor said.

Goodr, which is celebrating five years in business, is growing rapidly. This year they’ll build 10-12 new grocery stores, at least half of which will be built through a new partnership with Denver public schools in Colorado, and more to come in Birmingham and Atlanta.

Earlier this year, Goodr’s team celebrated their five-year anniversary and the launch of new headquarters in West Midtown. Reflecting on her achievement so far, Crowe said, “I’m just so proud that we’re still here. It’s hard for businesses to last this long; the fact that we’re growing makes me feel really good about what’s next.”

While Goodr’s expanding nationally, Crowe intends to keep her company in the city that helped her launch. “I started feeding people on the streets here in Atlanta. People have 100 percent supported me from the very beginning. It’s very serendipitous to do the work where I began doing the work.” 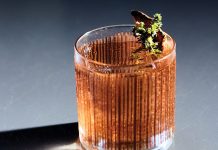 A cocktail from kitchen scraps: Gunshow’s seasonal tonic makes the most of leftovers 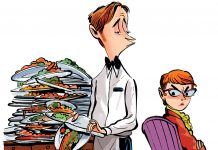 The Christiane Chronicles: America, home of the unfinished plate