Two months before he left office on January 1, former mayor Kasim Reed announced the sale of Old Fourth Ward’s Boisfeuillet Jones Atlanta Civic Center. Little was surprising about the $31 million deal for the half century–old performing arts center—once home to Family Feud tapings, Music Midtown sets, and even a visit from president George W. Bush. After all, the venue was in the middle of an area teeming with redevelopment, and Reed had made it a priority of his administration to sell off underutilized city properties. The only surprising thing? The buyer wasn’t a private developer but another public agency: Atlanta Housing.

Before the turn of the millennium, the city of Atlanta was considered a national pioneer when it came to public housing: the once-radical concept of providing low-income residents with housing subsidized by taxpayers. In 1935, Atlanta became the first city to build public housing. Decades later, it was one of the first to begin replacing its squat and sprawling apartment complexes—15,000 deteriorating units—with newly-built communities for low-income and middle-class residents. Techwood Homes became Centennial Place. Critics attacked the approach, arguing it was a top-down attempt to gentrify areas, break up communities, and push poverty from the city to the suburbs. Regardless, in the late 2000s, the Great Recession effectively stalled the housing authority’s efforts.

From 2009 to 2016, the city permitted the construction of more than 25,000 new luxury apartments. But nearly all of Atlanta Housing’s 400-plus acres of undeveloped property stayed vacant. The economic recovery, combined with the growing popularity of intown living, should have jump-started the authority’s efforts. Instead, they were stymied, this time by the autocratic Reed’s animus toward Renee Glover, who had led the authority since 1994 and butted heads with the mayor over her leadership style. In addition, HOPE VI, the federal program that helped fund new construction, began to wind down shortly after Reed took office. Following Glover’s resignation in 2013, Reed sued Integral Group, one of Atlanta’s most prolific developers of rental units for low-income families, for allegedly colluding with Glover to secure land deals. (Mayor Keisha Lance Bottoms dropped the suit.)

Consequently, the authority got wrapped up in power struggles instead of building new units. All the while, the supply of affordable housing in Atlanta dwindled by 25 percent. Agency leaders focused more on encouraging private landlords to accept authority-backed Section 8 vouchers, the rent subsidy used by nearly half of all Atlanta Housing households, for existing units. (More than 27,000 families are on the waiting list for the rental assistance.) According to the Housing Justice League, every year since 2012, five percent of Atlanta’s affordable units, which are subsidized for set periods, expired and went to market-rate rents.

“People were starving for the development of affordable housing,” says Atlanta City Councilmember Andre Dickens. “Over nine years, nothing [from Atlanta Housing] went vertical, nothing had been constructed. It was a missed opportunity.”

It wasn’t until 2016, when the average Atlanta rent had climbed to over $1,300 from nearly $1,000 five years earlier, that Atlanta Housing proposed Herndon Square, a $150 million mixed-use development west of Coca-Cola’s headquarters. That 700-unit project—with nearly half of those units either fully subsidized for seniors or available to residents earning under $35,000—won’t be completed until 2021. At least three other developments, including the Civic Center, are set to follow.

“Atlanta Housing had [become] more responsive and reactive rather than proactive on the real-estate development side,” says Brandon Riddick-Seals, who became the authority’s interim CEO after his predecessor, Catherine Buell, resigned this past spring. “We’re getting back in touch with ourselves to answer the need of the market.”

Backed and regulated by the U.S. Department of Housing and Urban Development, Atlanta Housing serves more than 50,000 people, with three-fourths of those households earning less than $24,300 per year. Residents must prove their citizenship, income levels, and lack of criminal history to receive subsidized rent. Once approved for public housing, residents over age 18 must work, attend school, or enroll in job training. (The elderly and disabled are exempt.) No more than 30 percent of a household’s income goes toward rent, with federal funds offsetting the rest.

Beyond a roof over a family’s head, Riddick-Seals says Atlanta Housing’s goal is to foster “stronger communities, brighter futures, and better lives” for residents. Atlanta Housing has started taking a holistic approach to offering wraparound services like childcare and educational programs. “They’re looking at the wellness of the whole individual,” says Thomas Boston, a Georgia Tech professor who has studied revitalization efforts in public housing. “That’s where they’re moving.” The hope is that, with Atlanta Housing’s help, residents can obtain better jobs and move toward homeownership.

“The crisis of affordable housing is now bigger than the housing authority.”

Dan Immergluck, professor of urban studies at Georgia State University, says Atlanta Housing should devote more funding to rental subsidies that are affixed to specific rental properties, keeping affordable units available in gentrifying neighborhoods. Georgia State sociology professor Deirdre Oakley believes the authority must get back to building—and fast. The longer the authority waits, she says, the more responsibility it holds for the lack of rentals for low-income residents. “The crisis of affordable housing is now bigger than the housing authority,” Oakley says. “If you’re not building new [units], you’re not helping all the people you could. They need to do the redevelopment they said they were going to do. That would be a step in the right direction.”

In the coming years, Atlanta Housing figures to play into Bottoms’s promise to pump $1 billion into affordable housing. Before she took office, the Atlanta Housing board had already passed a policy to prioritize helping people who live in census tracts where new development threatens to displace them, including in neighborhoods adjacent to the BeltLine like West End, Pittsburgh, and Reynoldstown. Authority officials have also looked into acquiring or investing in affordable housing units currently operated by MARTA and the BeltLine.

Riddick-Seals argues that Atlanta Housing’s “missed opportunity”—its undeveloped land scattered across the city, from northwest Atlanta’s Bowen Homes to Thomasville Heights on the southeast side—is now among its biggest assets. Whether building on old sites like the 26-acre Englewood Manor in Chosewood Park along the BeltLine or revitalizing neighborhoods near the Atlanta University Center, Riddick-Seals says the authority is committed to turning vacant acres into vibrant affordable housing at a time when it’s desperately needed.

In the Old Fourth Ward, where BeltLine-area development has crept toward low-income communities clustered near Boulevard, the Civic Center is likely to be a good measure of just how committed the authority is to building affordable housing. Initially, Atlanta Housing’s plans called for nearly a third of the 420 units to be deemed affordable. This past summer, though, Riddick-Seals decided to press pause on the 19-acre site to rethink how best to incorporate affordability, equity, and preservation into the mixed-use project. “It’s a great one,” he says. “But we’ve got to get it right.” 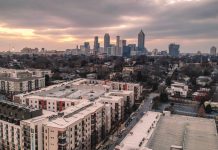 Commentary: Atlanta needs more affordable housing, but the city’s plan is short on dollars and details