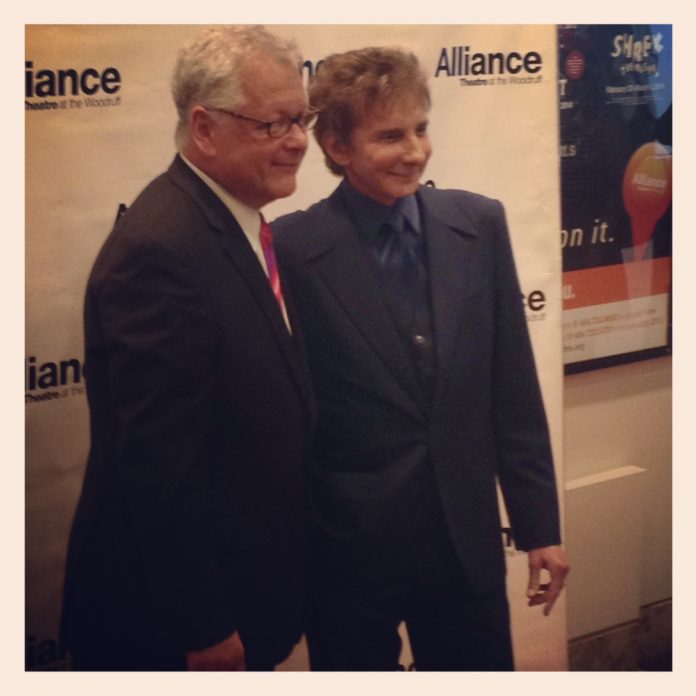 Die-hard Fanilows (the self-appointed nickname for Barry Manilow fans) and skeptical, pop music schmaltz allergic Alliance Theatre veteran supporters streamed in together for the world premiere of Harmony A New Musical at the Woodruff Arts Center Sunday night. The ambitious show, composed by Grammy-winning Copacabana songwriting partners Bruce Sussman and Barry Manilow, is based on the real-life German singing group, The Comedian Harmonists, who battled to stay together (and alive) as the Nazis ascended to power in 1930s Germany.

After researching our city’s Tony Award-winning regional theater’s track record for transforming musicals into Broadway hits, the pair cold-called Alliance artistic director Susan V. Booth, who leapt at the chance to bring Harmony to our city’s theater community. Moments before Sussman and Manilow walked the red carpet into the Alliance Sunday night, Booth took a second to reflect on that feat with Atlanta magazine. “This is gorgeous work that means more to these guys than their gold records and their lifetime careers,” Booth said. “That moves me more than I can say.”

Moments into the show’s opening title number, the non-Fanilows in the audience (the ones who would have happily selected a root canal sans Novacane over ever hearing Looks Like We Made It again in their lifetimes) ceased squirming in their seats. The show’s music remains stylistically true to the play’s period and free from any 1970s-era excess reminiscent of Tryin’ to Get the Feeling Again, with plenty of vocal gymnastics hard-wired into the score for the show’s leads Shayne Kennon, Douglas Williams, Will Taylor, Tony Yazbeck, Will Blum and Chris Dwan to have fun with. The score has much more in common with Manilow’s pair of obscure jazz-oriented albums, Two AM Paradise Café and Swing Street than his steady stream of AM radio hits from 40 years ago.

In fact, the only moment in the show where something close to a trademark Manilow melody arrives is in the middle of Act I when Kennon performs the soaring Every Single Day. On Sunday night, Kennon and Leigh Ann Larkin had trouble resuming their post-song dialogue as the audience continued to demonstrate its enthusiastic approval for the number. Other numbers that struck a strong chord with the opening night audience: The bitingly satirical Come to the Fatherland! in Act 2 and Larkin and Hannah Corneau’s gorgeous melancholy duet Where You Go.

Overall, Harmony has more of a musical kinship with future Broadway hit Elton John and Tim Rice’s Aida when it premiered at the Alliance in the fall of 1998. As was the case with that future Tony Award-winning Best Musical, many of the show’s songs and much of a stellar cast are already in place and without a problematic pyramid spewing hydraulic fluid all over the stage at every other performance. And Harmony is far better off than Sister Act The Musical was when it arrived in Atlanta on a wing and a prayer from Pasadena in 2007 (when some opening night audience members were observed banging back adult beverages in the lobby at intermission while shooing ushers bravely beckoning them back for Act 2).

As the crowd greeted the cast with a standing ovation at the end of Sunday night’s performance of Harmony, Manilow and Sussman took to the stage to address the crowd. Said Manilow: “We want to thank you for such a wonderful experience here at the Alliance. You people from Atlanta must be so proud. For Susan Booth and everyone associated with this theater, it’s is all about the work, it’s all about the art. We have loved working in this theater.” Added Sussman: From day one, Barry and I have had but one mission and all of our more recent collaborators up here tonight have brought their exceptional talents and full hearts to that. We wanted to tell the story of these six extraordinary young men and the women they loved, who together sought to find harmony in the most discordant chapter in history. It is their memory that we attempt to serve. It is their quest for harmony that inspired us. You have all been magnificent.”

Harmony runs through Oct 6 at The Alliance Theatre.