Home News & Opinion From the Magazine BeltLine rules of engagement

Despite our lousier-than-usual weather, the Atlanta BeltLine’s Eastside Trail drew daily winter patronage of 2,500 walkers, joggers, cyclists, and skateboarders. Plus that lady on the giant exercise scooter. As spring blooms and trail use booms, consider these rules.

1. Pet etiquette
Leashes over six feet are not allowed on BeltLine property; retractable leashes aren’t verboten but are discouraged. And clean up after Fido; ignoring leash or scoop rules can mean fines up to $100.

2. Night riding
The trail follows city park hours (6 a.m. to 11 p.m.), and you risk a citation from the Atlanta Police Department if you use the trail at other times.

4. Passerby
Always pass slowpokes on the left. If you are on a bike, ring a bell or call out, “On your left!” once you’re within earshot.

5. No moto
No motorized vehicles of any kind are permitted. Surprisingly, APD has no record of violations.

6. Speed racers
The trail has no speed limit per se, but officials urge racing-minded cyclists to use the trail when it’s less crowded (weekday mornings, for instance).

7. Saftey first
As of mid-December, only one injury had been reported: A cyclist lost control while riding too fast and was taken to Grady with a leg injury.

8. Graffitti
Most of that underpass artistry you Instagram is sanctioned as part of Art on the BeltLine. But graffiti is illegal. To date, APD has arrested one alleged BeltLine tagger and issued warrants for another.

9. Buskers busted
Street musicians are required to have city permits. So if you can’t endure the strolling violins, you’re entitled to ask to see a permit or call in a report.

10. Keep off the grass
Don’t traipse through cordoned-off areas. Since the trail opened in 2012, Trees Atlanta has planted 673 trees and inserted 109,000 grass plugs.

11. Off-trail use
BeltLine officials are working with trailside businesses to create design guidelines so connections look consistent—instead of the cow paths we’ve all created.

This article orignally appeared in our March 2014 issue. 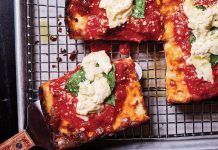