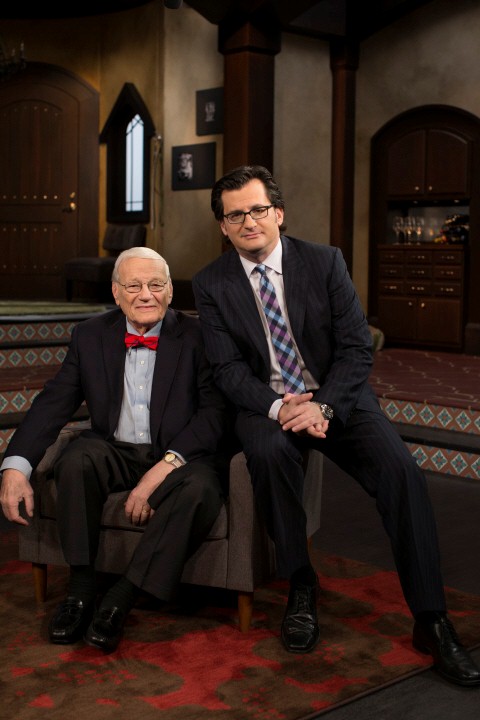 Turner Classic Movies host Ben Mankiewicz has temporarily lost the ability to use verbs on set this particular spring morning. For a guy who routinely chats up Peter O’Toole and Eva Marie Saint for a living, Mankiewicz appears a little rattled by today’s guest host, his father, legendary Washington D.C. insider Frank Mankiewicz. The 89-year-old was Robert Kennedy’s press secretary during his presidential run (Mankiewicz was the man on the podium at Good Samaritan Hospital announcing to the press corps that Kennedy has died on June 6, 1968 at age 42 after being shot by Sirhan Sirhan). He went on to run George McGovern’s 1972 presidential campaign against Richard Nixon. And then for an encore, in the 1980s, he oversaw the expansion of National Public Radio.
In honor of Father’s Day this Sunday, Ben and Frank Mankiewicz will co-host an afternoon of films they co-selected, among them the 1941 classic Citizen Kane written by Frank’s father, legendary Hollywood screenwriter Herman Mankiewicz. Frank also selected The Last Hurrah, an often-overlooked 1958 political drama starring Spencer Tracy. But perhaps the sweetest exchange between the father and son is their joint introduction of Ben’s pick, 1977’s Smokey and the Bandit. The elder Mankiewicz sat through the Burt Reynolds popcorn flick multiple times with a Trans Am transfixed 10-year-old Ben. On camera, Ben concedes the car chase riddled film probably wasn’t his father’s favorite film genre. His dad’s reply: “We were spending time together, that’s what was important.”
After the segment wraps and half of the studio envelops the older Mankiewicz to shake hands with him, Ben walks over to me. “That,” he whispers in my ear, “was terrifying.” A few minutes later in the TCM green room, Frank Mankiewicz reflected on his fascinating political life and his family’s Hollywood legacy.

Q: For movie fans, debate still rages over the screenwriting credit for Citizen Kane. Your father ended up sharing the credit with director Orson Welles. Is this still an internal debate within the family too?

A: Not to me. I don’t think that a debate rages with anyone who really knows the background. The facts are too clear. There’s no piece of paper anywhere that Orson Welles wrote on about this movie. There’s no script by Welles, no handwritten notes, nothing. But it was his movie. What prompted the joint credit was that his contract with RKO stipulated that he write, produce, act and direct or he wouldn’t get paid. My father eventually yielded and gave him joint credit.

Q: Your father wrote the Marx Brothers movies Horse Feathers and Duck Soup and Pride of the Yankees starring Gary Cooper. Did you grow up going to see these films with your father’s name in huge letters on the screen?

A: Oh, sure. He didn’t but I did! It was a 9 to 5 job for him. It was work. He never brought his work home with him. We never talked about movies at home. I never remember hearing him say, “Well, we gotta lick that problem in the second act.”

Q: Your family’s household table could have been the Algonquin Round Table of the West. We’re talking about F. Scott Fitzgerald, Zelda Fitzgerald, the Marx Brothers and Dorothy Parker. What life lessons did you take away from growing up around all of that?

A: I suppose the importance of humor and the fact that you mustn’t take anything too seriously. Harpo [Marx] came to our house often. He was a friend. He came to a couple of Seders. At one point, there was singing and he took the Passover lamb drumstick and began using it as a baton and led all the guests around the table singing.

Q: On set, you talked with Ben about how television changed politics. The 1960 Kennedy/Nixon debate was the first televised debate with Nixon forgoing make up and sweating and a poised Kennedy in make up looking very presidential. In 1967 as Bobby Kennedy’s press secretary, you had to live through the flipside of that debate during the nation’s first satellite debate. Kennedy was in Washington and Ronald Reagan was in California, right?

A: Correct. Don Hewitt of CBS News talked me into it. I stood there and watched Bobby Kennedy do all the wrong things on live television. He was looking at the monitor instead of the camera. We’re in Washington and Reagan, a trained actor, is in some studio in Hollywood and these kids are asking questions from India, Japan and England. Reagan looked right into the camera as he answered and Robert would look away at the monitor. I’m sure it looked awful! I never heard the end of that. We could be having a discussion on any policy matter where we might be on opposite sides and Robert always turned to me and reminded me, “Wait a minute, you got me into that debate with Reagan!”

Q: Ronald Reagan continued to haunt you into the 1980s when he was president and you were busy expanding National Public Radio as its CEO. At one point, the Reagan administration threatened to seriously cut federal funding for NPR. Did you ever stop and think, “This guy just won’t leave me alone?”

A: (laughs) Not really. Shortly after Bobby Kennedy’s assassination, Congress voted to give him a medal. It got lost during Jimmy Carter’s administration. But Reagan found it and hosted a very nice reception to award the medal to Ethel Kennedy, Robert’s widow. I was there. He gave a very nice speech about Robert Kennedy. I wrote him a note to thank him. Six months go by and I was in an airport somewhere and I get paged to come to the white courtesy phone. It was Reagan on the other end. He had just gotten my note, someone had misplaced it and he had called to thank me. In the middle of an airport! We talked for 10 minutes or so about the movies and my family. He was a delightful fellow.

Q: You characterize your candidate in the 1972 George McGovern presidential campaign as the greatest president we never had. How would the country have been different if McGovern had won that election?

A: First of all, the whole Vietnam experience would have been cut short. McGovern was an extraordinarily good man. He would have accomplished a lot domestically. And we wouldn’t have military bases in 127 countries as we do now.

Q: As the Watergate scandal bubbled over on the front page of the Washington Post, were you ever tempted to put a Don’t Blame Me, I Voted For McGovern bumper sticker on your car?

Q: My last question: As you prepared for TCM’s Father’s Day co-hosting assignment with Ben, did you have to re-watch Smokey and the Bandit?

TCM’s Father’s Day celebration with Ben and Frank Mankiewicz begins at 11:45 a.m. Sunday with Citizen Kane, followed by All The King’s Men at 2 p.m., The Last Hurrah at 4 p.m. and Smokey and the Bandit at 6:15 p.m.