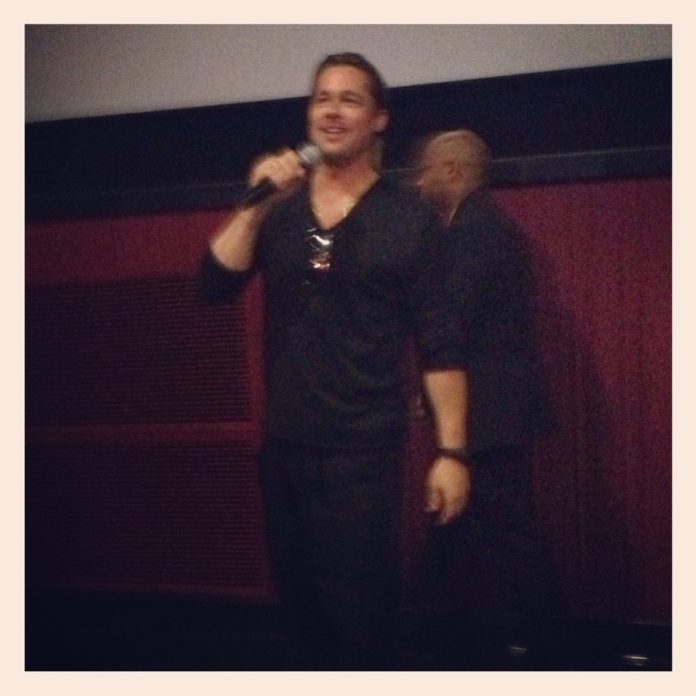 When the linebacker-sized gents in dark suits slid into position against the walls of the Atlantic Station Regal 16 Theatres just after noon Thursday, the packed house awaiting the start of the special fan screening of World War Z began to theorize that Q100’s Jeff Dauler might not be the biggest celebrity they’d see all day. A live microphone quietly exchanged hands, a nattily attired linebacker glided past another, whispering “we’re five minutes out” and a side door was propped open.

And then, one of the biggest movie stars on the planet bounded into the theater, greeting movie goers with “Hello, Atlanta!” as the shrieks of teenagers mixed with the screams of sippy cup carrying moms, who have been dutifully observing Brad Pitt in films since he first seduced “Thelma and Louise” with his abs back in 1991.

Dressed in all black, his sunglasses tucked in the opening of his shirt and dirty blond hair pulled back in ponytail, Pitt smiled and took in the applause. “Thank you for coming,” the actor said when the shrieks finally subsided. “It’s really nice to be here. Thank you Atlanta!” The star of Moneyball then added: “Since I’m in Georgia, I gotta do a little shout out to the Braves.” The crowd happily complied with applause.

Then added the actor and film producer who, if you believe Vanity Fair magazine, pumped considerable capital, blood and sweat into making the big screen summer zombie apocalypse flick based on the 2006 novel by Max Brooks: “I know a few of you cut some classes to be here so we’re going to make it worth your while. We got something you’ve never seen before. It’s the most intense thing you’re going to see all summer. It’s so fun. I’m really happy for you guys to see it. We’ve got snacks, we’ve got T-shirts for everyone when it’s over, so have fun!”

At the prospect of a free T-shirt, the crowd screamed louder as a lone woman stood and shouted “WE LOVE YOU!” Pitt grinned, waved goodbye and slid back out the same door he had entered one minute and 28 seconds earlier.

The lights then dimmed and Pitt’s cuticle chewer of a summer action movie about a man attempting to save his family after the undead invade the planet began with Pitt’s film production company, Plan B Entertainment flashing on screen. Atlanta served as the kick-off city for a series of special fan screenings of World War Z Pitt will be attending in advance of the film’s official June 21 release.