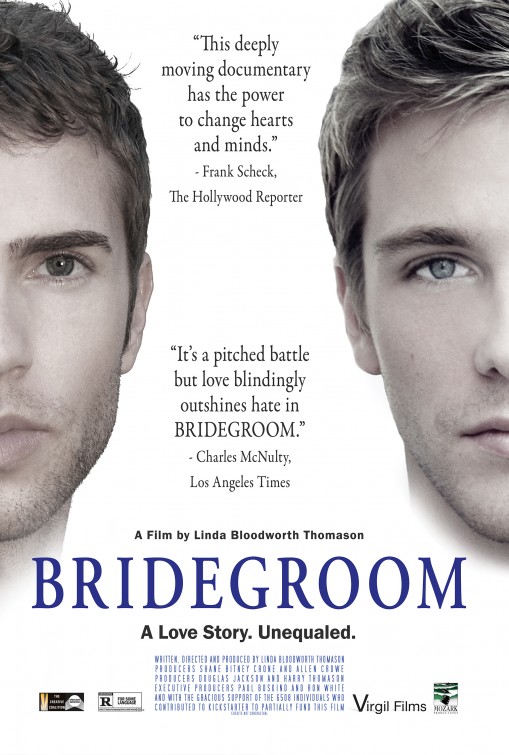 As the worst moments of his life played out on screen in the final minutes of Bridegroom inside a theater at Landmark Midtown Arts Cinema Thursday night, outside in the hall, Shane Bitney Crone took a moment to recharge. Leaning against a lobby wall, the documentary’s producer and star allowed himself a breather, his cellphone charging in the outlet below him as audience members wept in the next room. When you’re communicating with 18,985 Twitter followers and more than four million people have watched your YouTube video and continue to post heartfelt comments hourly, you need a fully charged phone.

When Designing Women creator Linda Bloodworth Thomason saw Crone’s ten-minute 2012 video, It Could Happen to You, she contacted him and asked if she could transform the story of his six-year relationship with life partner Tom Bridegroom into a feature-length documentary. The result is quite possibly the most compelling argument for marriage equality ever committed to film.
Even though the Los Angeles-based couple owned a business, a house and a dog together, after Bridegroom’s death at 29, following a freak accident, in the eyes of the law, Crone was powerless. Tom’s mom Martha swept into town, scooped up her son’s belongings and a suit to bury him in, along with his body and retreated back to Indiana, where Crone was later barred from Tom’s funeral and all evidence of their relationship was carefully edited out of the memorial service. When the couple’s friends in California balked and began speaking out on his Facebook page, Tom’s parents had the page taken down.

As the credits rolled and the lights came up on the final selection of the 26th annual Out on Film festival Thursday night and Crone walked to the front of the theater to talk about the film, he was greeted with a standing ovation. “This is a huge honor,” Crone told the crowd. “This is the only festival we’ve been in where the film has closed the entire festival. Thank you so much.”

Ironically, the couple ended up sitting at Bloodworth Thomason’s table at the gay wedding of a mutual friend four years before Tom’s death and the pair discussed getting married. In 2012, the filmmaker who produced and directed the Clinton presidential campaign’s The Man From Hope doc reconnected with Crone to make Bridegroom. Crone had deeply personal video diaries he shot after Tom’s death and hours of vacation footage of the couple to give her. “I don’t think Linda expected me to give her this ton of footage,” said Crone. “It was a little embarrassing! But for me, the video diaries became an outlet, an outlet where I didn’t have to burden anyone else. I felt that it was important for people to see that side of [grieving]. I just wanted it to be authentic and honest.”

After Bridegroom’s death, Crone found himself an accidental activist and edited together the elements that became It Could Happen to You and posted it on the first anniversary of Tom’s passing. “For most of my life, I’ve been ashamed of being gay,” Crone explained. “I never went to a gay pride. I wasn’t proud. After Tom passed away, I spent a lot of time trying to make sense of what happened. Then, I realized, it wasn’t ever going to make sense. I finally reached the point where I wanted to tell people what happened and I wanted to warn people and show them what can happen if you don’t legally protect yourself for the unexpected. I also wanted to show what happens when you don’t have access to the same rights as other people. I had no idea it would go viral. It was just something I needed to do for myself and for Tom.”

On October 27, Bridegroom will expand its scope when the doc airs on the Oprah Winfrey Network and debuts on Netflix. A DVD of the film will be released on Nov. 19. Said Shane: “This may be one of those films where, in order for the people we want to watch it, we’re going to need to rely on us to get them to watch it. The Oprah thing is pretty crazy. I still can’t believe that’s happening. Hopefully, we’ll reach a lot of people. With Netflix, we have an opportunity to reach people globally. The idea of that is really exciting.”