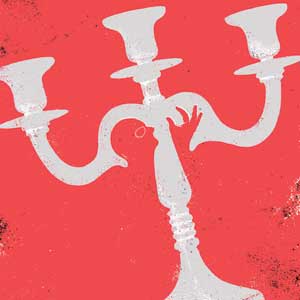 Forget about the polishing and dusting that accompany those monogrammed mint julep cups handed down by Great-Grandmother. Buckhead residents have a new worry when it comes to their sterling silver after a string of thefts perpetuated by a particularly crafty—and picky—burglar.

Stately homes on Tuxedo Road, Woodward Way, and Northside Drive have been cased, and then hit, by a type-A thief patient enough to painstakingly chisel, remove, and replace door panels. “It almost looks like he sweeps up after himself,” says Atlanta Police Department’s Zone 2 Detective Drew Bahry, the lead investigator on the string of crimes.

Not only is he fastidious, but the thief unerringly heads straight for the sterling, leaving silver-plated items, jewelry, and even laptops or iPhones behind. As any collector—or fan of Antiques Roadshow—knows, it’s not easy to tell silver plate from the real deal, especially in the dark. So how is the burglar able to determine the difference? That’s what’s making high-end silver-store clerks, collectors, and Buckheadians a little bit nervous.

“These are professional people who know what they are doing,” says one silver-shop worker who declined to be named. The culprit’s techniques certainly seem to be rooted in knowledge, agrees silver historian and appraiser Joseph P. Brady. Silver dealers know “little tricks,” says Brady. “For example, when you see a large tray and the field of the tray is plain, chances are it is sterling. If it were engraved or featured scrollwork, it is more likely to be plate in order to hide scratches,” which would reveal the copper underneath the silver coating. It’s also probable the bandit is savvy about the neighborhood: so attuned to the well-heeled addresses, he knows which homes are more likely to contain old-money sterling compared to nouveau-riche plate.

There’s little hope any heirlooms will be recovered. The swiped silver is in all likelihood melted down, since, like gold, silver currently trades high (more than $28 per troy ounce). Sterling is relatively easy to convert to cash. It takes only a simple Internet search to get instructions on do-it-yourself silver melting, says Bahry. A pillowcase stuffed with fifty pounds of teapots, spoons, and gravy ladles can easily yield $20,000. With several homeowners robbed of up to and over $150,000 worth of silver, “he’s onto us for almost a million,” Bahry notes of the burglar.

The flatware felonies make residents question the effectiveness of alarm systems. The burglar squeezes through spaces only motion detectors—which many homeowners don’t use because pets can set them off—could sense. Because chiseling doors is noisy, the thief often strikes between 2 and 4 a.m., selecting two-story homes whose owners are likely to sleep upstairs.

Whatever the thief’s technique, homeowners have increased their watch. One longtime resident of 30305 whose sterling was swiped says she finds it “personally insulting not to be able to have pretty things.” While she and her husband were in bed, the intruder(s) entered the kitchen and grabbed a tray full of antique flatware. She advises: “Get a dog. Set the motion detector at night. And keep your appraisals up to date.”