National Journal reports Herman Cain became the first 2012 GOP candidate to get Secret Service protection. According to the report, the Cain campaign is concerned about crowd control, not a specific threat. (UPDATE: The Associated Press reports Cain has received threats.)

It’s relatively early in the campaign for a candidate to get Secret Service protection, but it’s always better to be safe. Unfortunately, U.S. Presidential candidates have been targeted for assassination. Democratic candidate Robert Kennedy was shot and killed in 1968 after winning the California primary. In 1972, Alabama Governor and Democratic candidate for President George Wallace was shot while campaigning in Maryland.

And in 1912, Teddy Roosevelt was shot before a campaign speech in Milwaukee. Roosevelt had already served two terms as President (1901-1909) but was trying to make a comeback. The assassin’s bullet entered Roosevelt’s chest, but didn’t hit any vital organs because it was slowed down after passing through the 50-page folded speech text in Roosevelt’s pocket. Bleeding from his wound, and with a .38 caliber bullet lodged in his chest, Roosevelt stayed and delivered the speech.

The video below tells the story, and includes an x-ray of the bullet in Roosevelt’s chest, and a picture of the speech text with visible bullet holes. 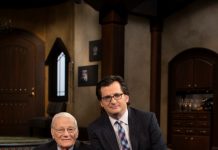