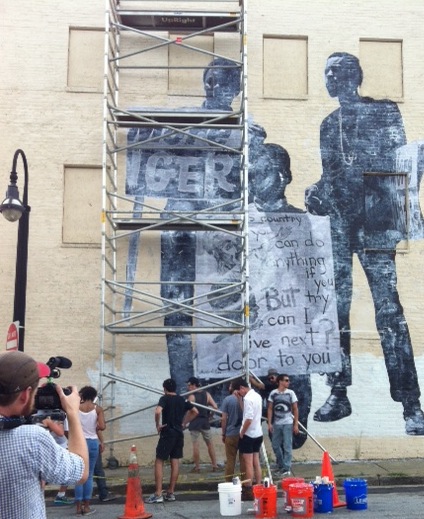 Three giant (as in building-sized) murals were installed in the King Historic District yesterday in the latest Living Walls effort to turn structures into canvasses. One such “canvas” is the former Henry’s Grill at 345 Auburn Avenue, where a small crowd turned out to watch an acclaimed muralist at work.

The three King District murals commemorate the upcoming fiftieth anniversary of the 1963 March on Washington for Jobs and Freedom, and were created by the internationally known French muralist, JR. Although press materials and JR’s own bio claim that the artist “remains anonymous,” he was very present yesterday, directing his assistants, and snapping pictures with fans and spectators, among them Kwanza Hall, who represents the King area on Atlanta City Council.

Once a youthful graffitist himself, Hall, said he plans to have more artists put their work on empty walls in his district as a way to “open dialogue and provoke thought.” (Fun fact: as a teen the future-councilmember got into trouble for his graffiti efforts.)

“It was appropriate at this time in the country for a message like this,” Hall said of the 1963 march. “It’s still poignant, people are still talking about it.”

The new murals use photos taken during the Civil Rights era—some from the march itself—and according to the artist, “Placing them in the public space adds a geographical dimension to their historical references.” The mural on Hilliard Street shows three black men, with one in the center holding a sign saying, “In this country you can do anything if you try, but can I live next door to you?”

The other two murals were scheduled to be installed on Hilliard Street and Edgewood Avenue.