One of the little forests in the city of Atlanta is a rolling 26-acre patch in Oakland City, not far off Cascade Avenue. When the sun blasts the pavement out on the busy street, the shade cast by the tree canopy provides a little relief. One day in June, a couple dozen folks—students and teachers, neighborhood activists, environmental scientists—met there at the headquarters of the West Atlanta Watershed Alliance. Darryl Haddock, WAWA’s environmental education director, stood on the building’s back porch looking out on the trees, which he said constituted one of the last old-growth stands in the city. “We’ve got some beech trees that have been around since the Civil War,” Haddock said.

A late-afternoon rainstorm forced the gathering inside; if it cooled the air at all, the difference was slight. The heat stayed—and was the topic of the day. WAWA is a partner organization in Urban Heat ATL, a collaborative study to better understand the effects of high temperatures in Atlanta. The project takes the general concept of urban heat islands—cities tend to run hotter than surrounding rural areas, what with all the nonreflective surfaces and exhaust-spewing automobiles—and sharpens the focus to the street level. As the globe continues to warm, which Atlanta neighborhoods get hottest, which stay cooler—and who lives where?

This summer, students and citizen scientists are walking or biking around with small, Bluetooth-enabled sensors that take temperature measurements, then pooling their findings to create a kind of heat map of the city. Months into the project, they had gathered in Oakland City to swap notes. One participant was Maya Griffin, a rising senior at Spelman who’s been taking readings at home in Sandy Springs, as well as at a friend’s house in Vine City. If she takes the sensor elsewhere, she’ll note whether the area is wooded or covered in asphalt.

Griffin volunteered for the project because she loves to do anything that involves research. She used to think she’d study environmental science but ended up pursuing economics. She can bring a different perspective, she said, in a field where people like her are underrepresented. “If I am a Black lesbian woman, but there’s some heterosexual white man making decisions—how does it benefit me?” she said. “He doesn’t know what it feels like to be me.”

The distinction is as relevant in ecology as it is in econ. Like other effects of climate change, extreme heat will be distributed unevenly, with people of color, poor people, and other marginalized populations bearing the brunt. They already are. A study published this year in the journal Nature Communications found that in urban areas, people of color tend to live in census tracts with hotter summer temperatures than white non-Hispanic people, with Black residents specifically experiencing the greatest differential. Similar patterns were evident for households living below the poverty line relative to those above it. Other recent research found that urban neighborhoods that had been redlined—subject to racist housing practices in the mid-20th century—tended to have less tree canopy cover, and were therefore hotter, than nonredlined neighborhoods.

Historical and systemic injustices are “kind of like preexisting conditions for communities that may be vulnerable” to heat, said Dr. Na’Taki Osborne Jelks, a WAWA cofounder, environmental health scientist at Spelman, and academic colead on Urban Heat ATL (along with Georgia Tech’s Dr. Kim Cobb). “We really wanted to understand what the urban heat island effect looks like in Atlanta. Who is it impacting? We want to be able to use that data to make convincing appeals for policy and social change, if it’s indeed needed.”

Heat taxes the body; sustained high temperatures can lead to heat exhaustion, heat stroke, and other ailments. “Heat is the most threatening consequence of climate change,” says Dr. Brian Stone, an urban-planning professor at Georgia Tech. “Episodically, we get a lot of attention on hurricanes and extreme weather. But we know both historically and looking ahead that many, many more people get sick and die from heat exposure than any other form of extreme weather—really, all other forms of extreme weather combined.”

The director of Georgia Tech’s Urban Climate Lab, Stone is the lead author of another new study exploring the alarming implications of sweltering summer temps. His lab has been researching compound climate events—a term that often refers to two climate disasters happening in tandem, like a drought and a wildfire. Another type, though, is a climate disaster exacerbated by some nonclimate phenomenon—like the spectacular failure of the Texas power grid last winter in the wake of freak winter storms, a combination of events that left hundreds of people dead.

The new study drills down on a similarly plausible scenario: a grid failure during a prolonged heat wave, i.e., what happens when it gets dangerously hot and the air conditioning fails. While it’s easy enough to determine outdoor temperatures during a heat wave, Stone and collaborators from the U.S. and Canada were curious about indoor temps, which they calculated using data on different types of housing stock combined with data from past heat waves. Published in Environmental Science & Technology, the study focused on three cities—Phoenix, Detroit, and Atlanta—and determined that the type of scenario modeled would present between two-thirds and 100 percent of residents with elevated risk of heat stroke or heat exhaustion.

“In combination, an electrical grid failure with a heat wave is probably the deadliest climate-related event we can imagine in the United States,” Stone said. If such an event happened in Atlanta, the authors calculated, more than 350,000 residents—about 70 percent of the population—could experience dangerous indoor temperatures of at least 32 degrees Celsius, or about 90 degrees Fahrenheit. Moreover, Atlanta has only five cooling centers, which—as in the other cities studied—aren’t required in emergency plans to have backup power generators.

Stone and his colleagues relied on real, historical heat waves to input data into their models—for Atlanta, they used a heat wave that hit the city in 1995. “By 2030, that heat wave will be fairly routine—we’ll probably see it every couple of years, instead of every 10 or 20 years,” he said. Another thing becoming more common? Grid failures, with the number of annual blackouts in the U.S. more than doubling since 2015. During a stretch of scorching temperatures in Texas in June, the state’s power authority issued pleas to customers to conserve electricity—worried that “potential record electrical use,” combined with some generating units being offline, might overwhelm the grid. The conditions Stone described seemed to be falling into place.

Both Stone and the Urban Heat ATL researchers hope to provide useful information to planners and policymakers. (The City of Atlanta is a partner in Urban Heat ATL.) Atlanta’s climate, like that in other cities, is facing another kind of compounding event: a development boom that threatens to reshape the physical landscape as it displaces longtime residents in hot (so to speak) neighborhoods. Jelks noted that Southwest Atlanta already contains a fair amount of forest—if it can be shown that those trees are helping keep temperatures down, maybe that fact will confer some protection. “Is that, then, an extra bit of ammunition to help bolster the on-the-ground advocacy that is happening to make sure that people are not displaced from these areas as more development comes, as gentrification comes?” Jelks said. The hope is that the data can give members of targeted communities the knowledge and resources to advocate for themselves.

Darryl Haddock, of the West Atlanta Watershed Alliance, says there’s value in being able to quantify something that, in certain respects, resists quantification: trees, forest, greenspace—these centerpieces of Atlanta’s civic identity. “When developers come, and they talk about tax-revenue generation, we can say that there’s ecological value that could offset that,” he said, looking out at the centuries-old forest in Oakland City. There are plenty of reasons to leave the trees standing: the educational aspect of a wooded preserve, the mysterious beauty of the forest, the way that access to nature anchors communities and connects the generations. All that ineffable stuff. But there are more prosaic reasons, too. “We don’t want to give away free air conditioning,” Haddock said. 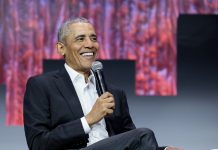