Home Home & Garden Neighborhoods Last night’s Cobb community meeting about the Braves was just like a... 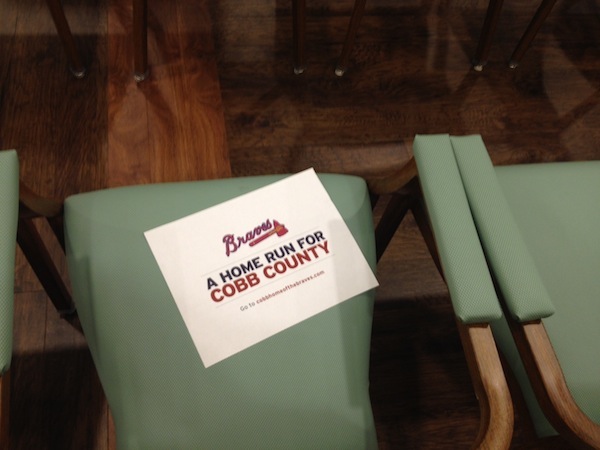 Anyone who still questions whether Cobb County residents are ready for Braves baseball should’ve been at last night’s town hall meeting at the Senior Wellness Center in Marietta: The crowd of about two hundred trickled in late (apparently traffic in the I-75/I-285 corridor can get a bit gummy for 7 p.m. weeknight events) and left early. There was a cadre of enthusiastic faithful wearing navy shirts and waving signs reading “Cobb: Home of the Braves” that were handed out by a local businessman in the parking lot. At one point, they even tried to sound the Tomahawk Chop (an offensive and obnoxious rally wail that should have been tossed out during the last move to a new stadium). Then, just like at the Ted, there was an almost equal contingent of dissenters, including one in a Mets jersey, trying to rouse a combatant chant of Chop! Chop! Hell No!! Chop! Chop! Hell No!! There were a few neutral parties fading in and out of attention from the cheap seats. And, of course, there were plenty of empty chairs.

County Commission Chair Tim Lee kicked things off with a blanket statement about the Braves 2017 move to East Cobb that summoned a mix of boos and applause. “I believe this relocation of a corporate leader is a home run for our county, no ifs, ands, or buts about it.” But most of the citizens who stepped to the plate to face Lee and host, District 1 Commissioner Helen Goreham, had plenty of ifs, ands, and buts.

Lee fielded questions about increased traffic, stadium design and parking, the Braves’ level of commitment, and the relative rushing of the Commission’s vote on the deal next Tuesday with a visibly decreasing supply of patience. (Lee got a quick chance to regroup while Goreham addressed a sudden and somewhat random plea from an elderly Kennesaw resident for a feasibility study for the pickup of recycling outside the city boundaries.) Lee repeatedly touted his “home run,” and eventually upgraded it to a “grand slam.” He scolded the crowd for the heckling and hisses, encouraging “adult discussion.” At one point, a petitioner simply asked if the people could have a referendum to vote on whether they wanted this deal to go through. When he failed to answer, the crowd persisted, and Lee let slip a booming “No!”

But it seemed like the sentiments of the silent majority in the crowd were voiced by one elderly man in a scarf, spectacles perched near the tip of his nose who approached the microphone and, reading from notes, asked in a simple, deep, country drawl: “Are my taxes going to go up?”

“Not because of this,” said Lee.

“Are they going to go up just because you don’t like us?” said the man.

Lee laughed along with the crowd and rattled off a long spiel about reallocating existing funds, bonds, and millage rates. This was followed by a brief silence.

Lee exhaled and calmly replied: “No.”