“I can make art anywhere,” says self-taught artist Dapper Bruce Lafitte. “It’s in me.” Just a decade ago Lafitte was sketching in a FEMA trailer in New Orleans; today his distinctive drawings (Lafitte likens the colorful style to Egyptian hieroglyphics) are displayed in New York galleries and, this month, the Atlanta Contemporary.

Born Bruce Davenport Jr., Lafitte grew up doodling in the Lafitte Projects in the Sixth Ward. By high school he had dropped art for football and only began drawing again seriously a few months before Hurricane Katrina. Since then he’s produced thousands of works, introduced himself to prominent collectors and curators (including Diego Cortez, Jean-Michel Basquiat’s former agent, who now represents Lafitte), and changed his name. “Dapper is style and class. Lafitte is where I grew up, so I take that with me,” he says.

Many of Lafitte’s incredibly detailed works depict New Orleans’s celebrated high school marching bands, which all but disappeared in the years after the storm. His Atlanta Contemporary show (May 19 through August 7) features 30 18-by-24-inch drawings, which fit together to present one massive band, with smaller pieces below and above. “They’re fun, [but] they also have political undertones,” says Atlanta Contemporary curator Daniel Fuller. “He’s making work emblematic to the South and to the city of New Orleans.” 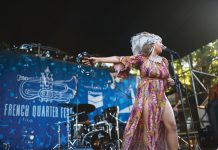