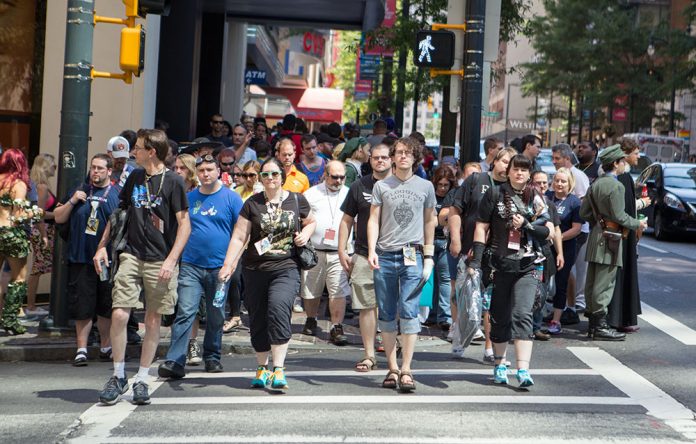 If you’ve never attended Dragon Con, Atlanta’s annual convention of all things sci-fi, gaming, anime, and general nerdom, you should know one thing: It’s massive, and undertaking all four days of the convention is an incredible, exhausting feat. But as Atlanta newcomers and self-proclaimed geeks, we decided to tackle the entire weekend to see just what these 60,000 mostly costumed fans were flocking to. While roaming the halls, we picked up some interesting stats:

(All numbers are approximated, and costume statistics exclude the parade)

3 events turned away from, some after waiting in lengthy lines

100,000 combined steps walked over the course of the convention

1,420 milligrams of caffeine consumed between the two of us

What we saw
15 Hunger Games outfits, including Katniss, Peeta, Effie, Finnick, and Johanna

7 Jesus Christs, which we couldn’t explain, including steampunk and zombie variants

14 Leeloos from The Fifth Element

10 Fully visible thongs (on both women and men)

14 Ambulances and fire trucks spotted stopped at the hotels

63 Out-of-place football fans, tourists, and non-con-attending locals, including a group of 10 KLM airline crewmembers clearly stranded overnight at the Hyatt

Finally, a few tips we learned from our first Dragon Con: