Bill Bolling
He stepped down this year as executive director of the Atlanta Community Food Bank, but Bolling remains a valuable resource for fledgling nonprofits.

Pete Correll
The former CEO and board chairman of Georgia-Pacific is chairman of the Grady Memorial Hospital Corporation, which he helped create in 2008. Shirley Franklin
The feisty ex-mayor has devoted herself to the cause of education, with the occasional foray into online political punditry.

Charlie Loudermilk
The Aaron’s Inc. founder has been a force on the Buckhead business scene for decades, establishing the Buckhead Coalition and a new namesake park.

Joseph Lowery
One of the last of his generation of civil rights heroes, the former SCLC president delivered the benediction at President Obama’s first inauguration.

Sam Massell
As longtime president of the Buckhead Coalition, the former mayor of Atlanta is now known informally as the “Mayor of Buckhead.”

John Portman
A widely influential architect since the 1960s, Portman is also a developer who built Peachtree Center and much of the modern core of downtown.

Alana Shepherd
Cofounder of the eponymous Shepherd Center hospital, she has long been a prominent civic leader who’s well regarded in the business community. 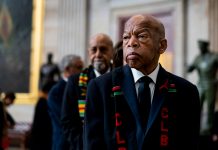