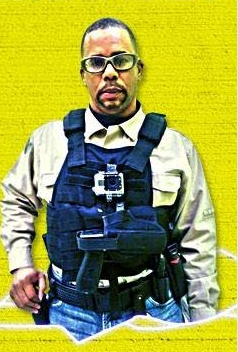 When I stopped by the other day, downtown Atlanta’s Metro Mall seemed to have fallen into darkness. The power was out—something about a small fire in a fuse box—though nobody seemed to notice, or at least not to care that much. Vendors used flashlights to set up shop, a customer bought jewelry by candlelight. Just another day at Atlanta’s most famous mall (at least by social-media metrics of fame).

But that celebrity is dimming just like the lights. Darien Long, the Metro Mall security guard who gained internet notoriety for videos of his exploits, is gone. On March 21 Long was arrested following a confrontation with a mall patron. Unable to prove he’d previously banned the man from the premises, Long was charged with battery and taken to jail.

The power-outage is a fitting start to the post-Long era, though it’s unclear whether it signals the slate being wiped clean or a return to the mall’s rowdy past. Such is Long’s legacy.

Dubbed the “Kickass Mall Cop,” Long skyrocketed to fame when a video of him using a taser on an irate woman in front of her children went viral, ultimately making headlines in New York, Toronto, and London.

It’s clear from his videos that Long, sporting tactical gear, a taser and a side arm, is in his element. He alternates between good Samaritan and Rambo, one minute protecting tourists, the next confronting groups of angry young men. In nearly all cases he is berated, attacked, or threatened. In many he uses his taser. Occasionally he pulls his gun.

Metro Mall, 73 Peachtree Street S.W., is tiny, barely big enough for its dozen shops and little food court. It slouches toward the Five Points MARTA Station on a block awash in foot traffic, a tide that brings not only customers but trouble.

Vendors are conflicted about Long. They agree the mall has crime problems, though some wonder if he went too far. Still, they refer to him as Officer Long and say, “He was always cool to me.”

Long was let go last week—before his arrest—though exactly why is subject for debate. Scheduled to work through March 31, he was on the job when trouble found him.

On March 24, Long was released from Fulton County Jail. Eager to talk, he called and we spoke for an hour.

He said his goal was to crack down on petty crime and disruptive behavior, things he believes the police lack either the time or interest to pursue. He insists his outspokenness embarrassed APD and City Hall. “They were looking for a way to arrest me.”

In conversation he referenced FX’s The Shield, listed Downtown troublemakers by name, bemoaned his low salary, and expressed a messianic belief in his mission to turn Five Points into a Buckhead-style tourist destination. As for his approach, he was unapologetic.

“You get somebody like me when you want somebody to do something,” he said. “When they turn it up, I turn it up.”

Will trouble return following his departure? He said he thinks so.

So what does a Kickass Mall Cop do without a mall? Fight on. On April 4, Long will appear in court for the March 21 arrest—and also faces charges from an earlier incident. Meanwhile, he’s “flooding the web” with videos, including several he contended show Metro Mall vendors receiving and selling stolen goods.

Will he work security again?

Besides he’d like a girl, which requires money. And security doesn’t pay well.