A collection of current and former politicians—including an ex-governor and two former Atlanta mayors—and an estimated 1,200 others came together this past weekend for the funeral of Cabral Franklin, son of former Mayor Shirley Franklin and an esteemed political adviser who had worked on a number of high-profile campaigns.

Franklin, 41, last week died after a yearlong battle with lung cancer—despite the fact that he didn’t smoke. On Saturday afternoon at the Greater Piney Grove Baptist Church near East Lake, many of the region’s top elected officials remembered the Democrat as one of the state’s shrewdest political strategists.

In the mid-‘80s, then-Mayor Andrew Young watched 10-year-old Cabral Franklin’s soccer team lose every game of the season. But the following year, Cabral switched to the goalkeeper’s position, and the team’s fortunes changed as it went undefeated. During the season finale, with his team leading 10-0, he was closing in on a season without a single goal scored against him. Then he let his guard down in the game’s final minutes.

“Somebody scored a goal,” Young recalled from pulpit. “And he had a fit. He did everything but roll around and cry. He was so mad because he was determined, after having been the loser, they were going to have a perfect season, and no one was going to score on him.”

Franklin’s pedigree—his mom a former mayor and his father, David Franklin, a political adviser and attorney who played behind-the-scenes roles in every mayoral election since Maynard Jackson (Cabral’s godfather) won in 1973 until his death in 2008—steered him toward launching his political consulting firm, Franklin Communications. Born with a speech impediment, Franklin was quieter than his mother, but commanded attention with his insight and intellect, which he frequently employed in political war rooms.

His work extended beyond candidates, such as working on the successful effort to pass the charter school amendment and assisting in the failed campaign to pass T-SPLOST. His work earned him the respect of both parties—Gov. Nathan Deal’s former spokesman Brian Robinson tweeted that he was “held in the highest esteem by his GOP peers”—along with his share of enemies, including those on the receiving end of robocalls, blog posts written for Blogging While Blue, and anonymous tips passed along to members of the press.

“He was doer of deeds, and a shaper of society; a champion of the people, and the issues he believed in,” Carter said. “He made friends, he made enemies—sometimes he turned them from one to the other—but he didn’t spend a single day on the sidelines.”

Speaking at the memorial, the 40-year-old Carter said he heavily on the strategist’s wisdom during his time in office and on the campaign trail during last year’s gubernatorial race. According to the Carter Center’s newly appointed leader, those insights—and Franklin’s willingness to share his expertise—didn’t stop in his final days. “He was texting me political advice from Turks and Caicos just last month,” he said with a laugh. Whenever people asked Carter for political advice, he pointed them to Franklin.

Rev. William Flippin, the pastor at Greater Piney Grove, read a note from Shirley Franklin, who was seated in the front row: “Cabral faced every day with courage. … He was not afraid of cancer or dying, exhibiting the fierce independence and self-confidence first [seen] in his very early childhood. I’m humbled to be his mother, and inspired by his big heart; his passion for life; his love for his family, his friends; and those who he leaves behind.”

A week before his death, Young added, Franklin displayed that fearlessness in the hospital, seeming less concerned about his illness than an upcoming Alabama election, world affairs, and the outcome of a soccer match (he was a Chelsea Football devotee).

Toward the end of the 90-minute memorial, nearly two-dozen choir singers broke into the gospel song, “May The Work I’ve Done Speak For Me.” Unsurprisingly, many of those singing along were politicians; including former elected officials (Gov. Roy Barnes, Sen. Sam Nunn, Young, Carter), current office-holders (Ceasar Mitchell, Lee May, John Eaves, Mary Norwood, Courtney English, Dickens), and rumored candidates (Ebenezer Baptist Church pastor Rev. Raphael Warnock, former Atlanta City COO Peter Aman). Their attendance, whether they realized it or not, spoke to the influence of Cabral’s work behind the scenes of Atlanta and Georgia politics.

Franklin is survived by his wife, Candice, a political fundraiser for 2017 mayoral candidate Cathy Woolard, and his two daughters, Kaci and Kori. 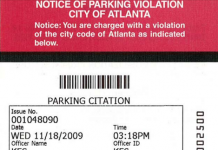 The end is nigh for PARKatlanta—now what?