Home News & Opinion From the Magazine For Paralympian Curtis Lovejoy, ’86 car accident was “one of the best...

In the beginning, Curtis Lovejoy would wheel his way to an area near the intersection of Campbellton Road and Delowe Drive. He’d peer out at the ribbon of highway that stretches into the belly of Atlanta, sit for a while, and ruminate. That’s where a driver cut him off on his way to work downtown, causing him to hydroplane and crash into a guardrail. Lovejoy struck a pole and ended up 100 feet down the road. His life, as he knew it, ended that day.

Now his mornings are different. Lovejoy hits the pool at the Adamsville Recreation Center by 5:30 a.m. He is an incomplete quadriplegic, which in Lovejoy’s case means he is in a wheelchair and has limited use of his arms. He’s also a competitive swimmer, having represented his country at Paralympic events around the globe. “It’s probably one of the best things that’s ever happened to me,” he says of the 1986 accident. Lovejoy is one of the most accomplished Paralympians in U.S. history. He’s visited with Nelson Mandela and Queen Elizabeth, who, he says, offered him a job after they met at the closing ceremony of the 1995 World Championships.

A salesman by trade, Lovejoy operated a number of Church’s Chicken franchises before the accident. The Atlanta native grew up in the Pittsburgh neighborhood and had never swum, until he was introduced to the water as a form of physical therapy. “I was terrified of it,” he says. But poolside one day, he started dreaming. “I closed my eyes . . . (I) saw medals going around my neck. So I got a coach and started learning how to swim.”

Nine years later, during Paralympic trials held at the Georgia Tech swim center, he set his first world record. Today he holds 10, including in the 100-meter breaststroke and 150-meter individual medley.

Lovejoy, who’s 58, is currently training for what will be his sixth—and possibly final—Paralympic Games, in Rio de Janeiro next year. He spends six days a week in the weight room and in the water. Queenie Nichols, the high-performance director for U.S. Paralympics Swimming who has coached Lovejoy, says, “Curtis and I connected, not because we were both later-in-life swimmers, but because we are older and appreciate being able to swim when we couldn’t as young people.”

During therapy, Lovejoy also picked up fencing. “It’s easy because I’ve got a lot of strength and power,” he says. In 2000 he became the first athlete to compete in two unrelated sports in four decades and later the first African American to win gold in two sports.

When he’s not training, he coaches up-and-coming swimmers at the Shepherd Center. As he wheels his way into arenas around the country, other athletes refer to him as “Legend.” Lovejoy is more matter-of-fact. “You take a tragedy and turn it around.”

2016
Lovejoy will participate in his sixth Paralympic Games.

This article originally appeared in our October 2015 issue under the headline “Golden man.” 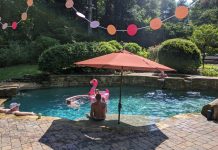 The Airbnb of backyard pools is making a splash in Atlanta 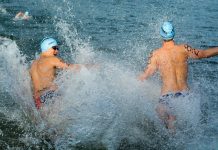