As Americans woke up this morning and checked their phones, their laptops, or—if they happened to be New York Times subscribers—opened their newspaper, they found a final message from the late Congressman John Lewis.

The nearly 750-word essay, published in the Times (the AJC also published the full text), was to be published on the day of his funeral and sends a message of comfort and hope to those who will continue Lewis’s mission of creating a just, equitable community for all. He recalls his last public appearance—a June 7 trip to Washington D.C.’s Black Lives Matter plaza—and explains why he had to be there, even as sick as he was.

“I just had to see and feel it for myself that, after many years of silent witness, the truth is still marching on,” he wrote. “Emmett Till was my George Floyd. He was my Rayshard Brooks, Sandra Bland, and Breonna Taylor. He was 14 when he was killed, and I was only 15 years old at the time. I will never ever forget the moment when it became so clear that he could easily have been me.”

Lewis’s essay also recalls the deaths of Ahmaud Arbery, Elijah McClain, Trayvon Marin, and the mass shootings at South Carolina’s Mother Emanuel Church and the Route 91 Harvest music festival in Las Vegas. But while he recognizes the injustices and pain, he stresses the importance of not losing faith in the actions that defined his life: nonviolent protest, voting, standing up for injustice, and causing “good trouble.”

“Humanity has been involved in this soul-wrenching, existential struggle for a very long time,” he wrote. “The truth does not change, and that is why the answers worked out long ago can help you find solutions to the challenges of our time. Continue to build union between movements stretching across the globe because we must put away our willingness to profit from the exploitation of others.”

“In my life I have done all I can to demonstrate that the way of peace, the way of love and nonviolence is the more excellent way,” he wrote. “Now it is your turn to let freedom ring.”

The speakers at his funeral, too, stressed Lewis’s final message, although each in their own way. The four-hour ceremony at Ebenezer Baptist Church featured eulogies from family, friends, and colleagues; music from Jennifer Holliday and the Winans family; the rare occurrence of eulogies from three living presidents: Bill Clinton, George W. Bush, and Barack Obama. (Rev. Raphael Warnock also read a short letter from Jimmy Carter, who is not traveling due to the pandemic.) Clinton was quick to point out that for all Lewis did, he was “after all, a human being, a man like all other humans, born with strength that he made the most of when many don’t. Born with weaknesses that he worked hard to beat down when many can’t.” That mortality made Lewis “even greater,” Clinton said. “I just loved him. I always will.”

Bush, the sole Republican president, recalled working with Lewis in the passage of legislation that lead to the National Museum of African American History and Culture and the Emmett Till Unsolved Civil Rights Crime Act, and of joining Lewis during a march on the Edmund Pettus Bridge during the 50th anniversary of Bloody Sunday.

“His lesson for us is that we must all keep ourselves open to hearing the call of love, the call of service, and the call to sacrifice for others.” Bush said. “John and I had our disagreements, of course, but in the America John Lewis fought for, and the America I believe in, differences of opinion are inevitable elements of and evidence in democracy in action. We the people, including congressmen and presidents, can have differing views on how to affect our union while sharing the conviction that our nation, however flawed, is at heart a good and noble one. We live in a better and nobler country today because of John Lewis and his abiding faith in the power of God, in the power of democracy, and the power of love to lift us all to a higher ground.”

House Speaker Nancy Pelosi and Jamila Thompson, Lewis’s deputy chief of staff, spoke to his work in Congress, while Bernice King and James Lawson, the 91-year-old civil rights strategist who influenced and taught Lewis, spoke to his work in the civil rights movement—a movement that Lawson said should be called what Lewis himself referred to it as: the nonviolent movement of America.

Pelosi, who teared up several times during her remarks, described the double rainbow that appeared over the U.S. Capitol this week as Lewis lay in state. “We always knew he worked on the side of the angels, and now he is with them,” she said.

Civil rights leader Xernona Clayton lead her eulogy by describing how she played matchmaker for Lillian Miles and Lewis, inviting them to a New Year’s Eve party that was—surprise—actually a private dinner between the three of them. She described being given the honor of becoming godmother to the couple’s only son, then asked John-Miles Lewis, who was sitting in the front row, to stand up, and explained that while she’d been tasked with “spanking him” when he was bad, at just 4’11” and “nearly 90 years old,” she would have had a heck of a time doing so. “I gotta get permission, because he’s pretty big now,” she said, adding that she would always love, take care of, and even spank him, “whether you like it or not.”

Despite hating politics, Lillian, Clayton said, was Lewis’s strongest supporter. “I put it together,” she said of their marriage, “but it lasted 43 years. That’s not a bad record, is it?”

Thompson’s eulogy gave insight into what it was like to work for Lewis. “He’s just as you may imagine but better,” calling Lewis an “instigator” who always got the staff “in trouble.” His penchant for always shaking one more hand, giving one more hug meant that his team “was always behind schedule,” and his impeccable work ethic could be exhausting. “No matter how hard we worked, he always worked harder,” Thompson said, who added that Lewis read the newspaper and watched the news daily, “forgot nothing,” and expected his staff to be as informed as he was. But above all, she described Lewis’s staff as a close family. “He allowed us to be our true and authentic selves, just the very best version,” Thompson said.

“While he loved his country and all its people, the record should be clear on his immense pride in representing Georgia’s Fifth Congressional District,” Thompson said. “He was so proud to represent metro Atlanta.”

Obama gave the final eulogy, describing looking up to Lewis as a hero and telling him, on Obama’s Inauguration Day as the country’s first Black president, that “this is your day, too.” (Just before his speech, Warnock told the story of Lewis asking for Obama’s autograph on that day, which Obama signed, “Because of you, John.”)

Like Lewis in his final essay, Obama acknowledged the continuing fight for civil rights. “He knew from his own life that progress is fragile. That we have to be vigilant against the darker currents of this country’s history. Of our own history, where there are whirlpools of violence and hatred and despair that can always rise again.”

“Today, we witness with our own eyes police officers kneeling on the necks of Black Americans. George Wallace may be gone, but we can witness our federal government sending agents to use tear gas and batons against peaceful demonstrators.” And even if “we may no longer have to guess the number of jellybeans in a jar in order to cast a ballot,” voter suppression exists in “closing polling locations, and targeting minorities and students with restrictive ID laws . . . even undermining the postal service in the run-up to an election that’s going to be dependent on mail-in ballots so people don’t get sick.”

Obama called on citizens to vote, to cause “good trouble,” to use nonviolent protest as a way “to raise public awareness and put a spotlight on injustice and make the powers that be uncomfortable.” He called for a restoration of the Voting Rights Act and stressed that while naming it the John Lewis Voting Rights Act was admirable, “John wouldn’t want us to stop there.” He called for automatic voter registration for U.S. citizens, restoring voting rights to former inmates, making Election Day a holiday, equal representation in government for D.C. and territories, ending partisan gerrymandering, and eliminating the Congressional filibuster, which he called “another Jim Crow relic.”

“We’re also going to have to remember what John said: If you don’t do anything you can do to change things, then they will remain the same,” Obama said. “You only pass this way once. You have to give it all you have. As long as young people are protesting in the streets hoping real change takes hold, I’m hopeful, but we can’t casually abandon them at the ballot box. Not when few elections have been as urgent on so many levels as this one. We can’t treat voting as an errand to run if we have some time. We have to treat it as the most important action we can take on behalf of democracy. And like John, we have to give it all we have”

Watch the full service below. (It’s long, but worth it.) 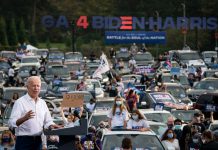 Georgia goes blue for the first time since 1992 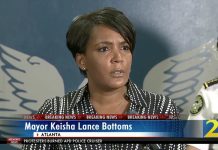