Home News & Opinion From the Magazine How one of America’s last-documented slave ships was used during the Civil...

The family tree of Charles Lamar included a U.S. Supreme Court justice, the second president of the Republic of Texas, and a U.S. Treasury secretary. But the Savannah aristocrat forever will be linked to the Wanderer, one of the last-documented slave ships to land in America. On July 4, 1858, the clandestine vessel—disguised as a luxury yacht—set sail from Charleston, South Carolina, arriving two months later near modern-day Angola. Using muskets, rum, and gunpowder, Lamar, a Confederate true-believer desperate for money, and his business partner, William Corrie, purchased 487 Africans from slave traders. On November 28, 1858, after a six-week voyage, the Wanderer dropped anchor near Jekyll Island to avoid detection in Savannah—Congress had prohibited the importation of slaves 50 years earlier—and the 409 captives who survived the trip were sold into bondage for upwards of $700 per person. Locals noticed, word spread, and Lamar, Corrie, and their accomplices were prosecuted but acquitted by a Savannah jury. Just as the trial roiled the country, the South seceded, and the Civil War began. The Union Navy used the Wanderer as a gunner ship against Confederate battlements. Around 1870, the boat sank near Cuba. Lamar died while fighting at the Battle of Columbus, considered the last battle of the Civil War. 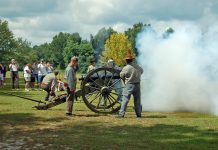