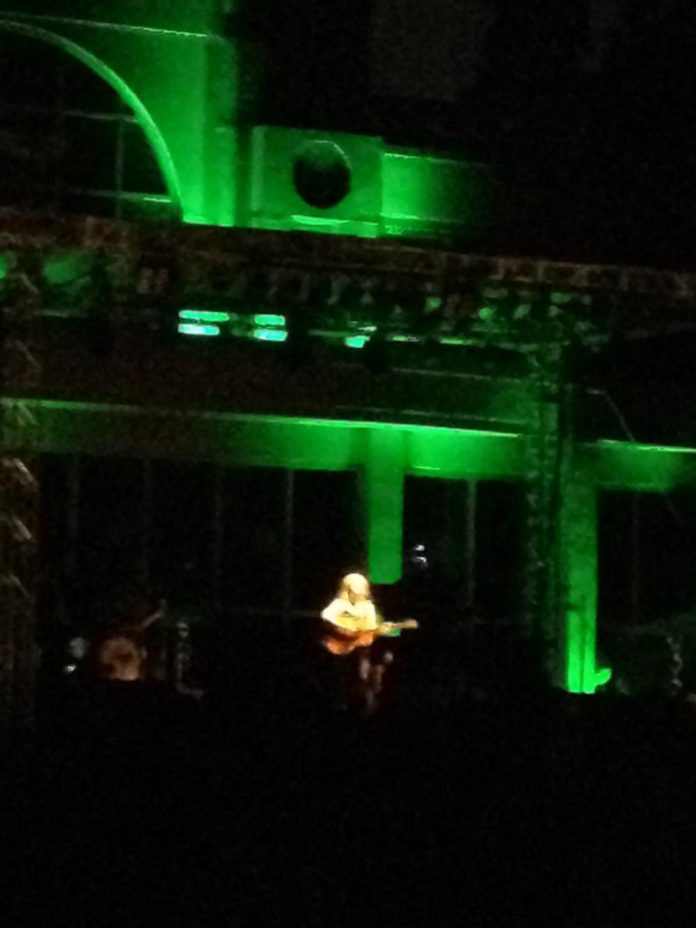 After the better part of 2o summers spent entertaining crowds at Chastain, Grammy winning singer-songwriter Mary Chapin Carpenter debuted her latest song cycle on the Great Lawn at the Atlanta Botanical Garden over the weekend. Before the show as the sold-out crowd spread blankets on the grass and brie over crackers, fans were already on the look out for the glowing pink flamingos, a staple at Chapin’s Chastain shows (fans routinely form a conga line around the amphitheater with the kitschy lawn ornaments whenever the singer performs her Grammy-winning hit, “Down at the Twist and Shout”). And sure enough, the birds successfully migrated to Midtown Friday night at the very end of the show.

“Here they go!” Carpenter exclaimed from the stage, laughing. “[Opening act] Tift‘s [Merritt] never seen anything like it! We’re so grateful to play such a beautiful place with such a beautiful skyline behind me. Thank you, flamingos!”

The conga line around the lawn provided a comic relief counter point in a show showcasing some of the most personal songs the singer has yet written from her brilliant new album, “Ashes and Roses.” Many of the songs were inspired by the 54-year-old performer’s scary 2008 pulmonary embolism that nearly killed her and kept her off the road for two years. In the interim, the vocalist experienced the loss of her father, Chapin Carpenter, a retired Life magazine executive and Washington lobbyist and her 2002 marriage to contractor Tim Smith ended in divorce.

Introducing the new song “What to Keep and What to Throw Away,” a step-by-step reenactment of boxing up your spouse’s belongings post-break up, down to tossing the grocery store notes in his winter coat pocket and smoothing the pillow in guest room where he was spending his nights at the end, Carpenter cracked, “There’s no instruction manual for this sort of thing. But it should have been a omen when he refused to go to a Bruce Springsteen concert with me!”

But as Carpenter and a tight band, including producer and bassist Don Dixon, producer and guitarist John Jennings and  and pianist Jon Carroll banged through her biggest hits, including “I Feel Lucky,” “He Thinks He’ll Keep Her,” and “Passionate Kisses,” the singer maintained her trademark sense of humor.

As a plane flew over and the cicadas and bull frogs serenaded her, the menopausal singer paused to concede, “Whoo, it’s happening folks. I can’t remember anything, I can’t hear anything, I can’t see anything and I’m hot all the time! These fans up here aren’t just for blowing my hair up!”