Peter Ferrari wanted to stress the importance of organizing and taking action. Quianah Upton focused on food access. Shannon Palumbo found inspiration in the words of Allen Ginsberg. On Thursday, massive banners painted by these Atlanta artists—along with roughly 30 other painters, poets, and musicians—were rolled out from East Atlanta to Castleberry Hill. Dubbed “Signs of Solidarity,” the banners are each adorned with a phrase meant to denounce hate and encourage unity. The artwork can be seen hanging from the roofs and windows of businesses and homes through Sunday.

In a press release, the group described itself as “a reaction to what appears to be a global shift towards fear and exclusivity.”

“I am a strong believer in the power of good people coming together,” Upton said. “Atlanta has some of the greatest artists and art organizations in the world, and this was a perfect time to express our unity. I knew that we would all have varied platforms with messages needing artistic expression. A public art project of this scale seemed like the right reason to bring us all together.”

Inspired by a similar initiative in Philadelphia, also called Signs of Solidarity, the group began collaborating in early January, says Monica Campana, the founder of Living Walls and a project co-organizer. They held a strategy meeting at Mammal Gallery on January 8 to discuss what they wanted to say with the project (promoting messages of inclusivity and love) and not say (anything that would further divide people, Palumbo says).

Grant Henry, the owner of Sister Louisa’s Church of the Living Room and Ping-Pong Emporium, donated 30 of the banners and grommets and started a tab for miscellaneous supplies at a local hardware store. Notch 8 Gallery provided workspace for two days, Campana says. The artists pooled their available paint and got to work. Then, with permission of the respective home and business owners, they started installing the banners overnight.

“I hope it will encourage folks to connect with us, to organize, and to begin planning our next steps as a movement,” Ferrari says. “This is only the beginning, and I believe artists have a special obligation to speak out and take action.”

Campana says Signs of Solidarity has amassed more than 1,200 Instagram followers in just a week. Two of the signs have been taken—she hopes whoever snatched them will bring them to tomorrow’s March for Social Justice and Women. Campana hopes people will be inspired by Signs of Solidarity and launch their own project.

“This is home, and this is a place that, in all the years I’ve been in the country, actually welcomed me,” says Campana, who is from Peru. “I know people are always ready to show up. The grassroots arts community in Atlanta is always willing to do. This is a good way to set the example for other cities that it’s time to act.” 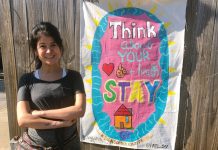