Darren Eales believes Atlanta is ready to embrace Major League Soccer, and he has 20,000 season ticket deposits to prove it. Pretty impressive for an as-yet-unnamed expansion team that won’t play its first game until 2017. As president of Atlanta United FC, it’s Eales’s job to make sure those fans have a team worth supporting.

The politely spoken 42-year-old from Cambridge, England, played college soccer in the U.S. at West Virginia and Brown in the early 1990s and then minor league soccer for the Hampton Roads Mariners, Hershey Wildcats, and New York Centaurs before heading home to become a lawyer. But Eales’s legal career led him back to soccer in the mid-2000s, first as in-house counsel at West Bromwich Albion (which was elevated to Britain’s vaunted Premier League during his tenure) and later as director of football administration at big-time Premier League team Tottenham Hotspur—current home of U.S. Men’s National Team World Cup star DeAndre Yedlin.

When Eales was recruited by Atlanta United FC owner Arthur Blank to build the city a top-tier soccer team from the ground up (the Atlanta Silverbacks are a separate organization playing in the second-tier North American Soccer League), he crossed the Atlantic one more time.

Are you concerned about Atlanta’s reputation as a fickle sports city? Atlanta is a city of transplants. If you’re a 30-year-old who’s come from Philadelphia and your dad took you to Eagles games, you’re always going to be an Eagles fan. In soccer, you don’t have that loyalty to another team because it’s a new league. It’s a young, diverse, international, and growing city, and all of that adds up to exactly the sort of profile you want for a soccer public.

How are you building a fanbase? We’re fortunate in that we’ve already got a really passionate and well-organized supporters group called Terminus Legion. We’re nearly two years away from playing, but they’ve already got chapters in Athens, Rome, and in areas around Atlanta. That’s the reality of soccer. It goes back to that sense of ownership; the fans feel that close connection to the club. You’ve got to realize that you can’t too strictly direct them. You’ve got to let things develop organically.

What sort of team do you want Atlanta to become? Georgia is a great state for youth soccer. We want to get as much homegrown talent into the Atlanta team as we can. It doesn’t happen overnight, but we’ll be setting a philosophy in place—looking to get youngsters in the area, develop them, give them the best practice, the best coaches. It will be like a Premier League youth development structure.

When are you going to reveal the team name? We’d like to get something out there before we have the Gold Cup semi-finals in Atlanta near the end of July. [Editor’s note: On June 25, Sports Illustrated reported that Atlanta United FC had been chosen as the team’s name.]

How is sharing the New Atlanta Stadium with the Falcons going to work? The important thing is that it’s not the Falcons’ stadium and then MLS is also going to play in it. It’s very much going to be soccer-specific when we play: The top bowl will be partitioned off with a curtain, so that noise gets contained in the lower bowl. Everything’s going to be LED, so at the flick of a switch, it’s going to be [Atlanta United FC] for our games. And the seats will retract from the American football setup, which means we can have a full-size soccer pitch in the stadium. Our aim is that when our fans come in, there’s a sense of ownership. If you happen to come to a Falcons game the next week, it will look totally different.

What’s the biggest challenge? We won’t have our squad and our players finalized until around December 2016, and then they’ll come together in January, and you’ve basically got two months to manufacture a team and the chemistry to be playing against teams that—in some cases—will have been playing in the league for 22 years. So I think that will be a challenge for us because it’s always been a challenge for expansion teams coming in. 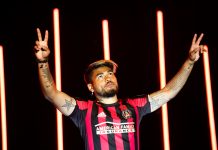