Around 1 a.m. on Thursday night, Ludacris announced that he was “just getting started” with his EA Sports Bowl set inside State Farm Arena. The rapper, who was preceded on stage by rappers including 21 Savage, Migos, Lil Yachty, Lil Jon and more, had just invited Ciara on stage to perform a few songs and was preparing to hand the mic over to Jeezy and surprise guest T.I. Unfortunately, the crowd had already begun to thin both in person and on the Twitter livestream of the concert.

The EA Sports Bowl lineup was one of the best opportunities for Atlanta music fans to get a glimpse at current and former hitmakers under the same roof, but the latter performers were certainly slighted by a set time that didn’t start until after midnight.

From an early Metro Boomin and 21 Savage set to performances by Quality Control artists Lil Yachty and Lil Baby, the EA Sports Bowl was one of the only places to see current Atlanta artists on stage for a reasonable price. (Tickets started at $70.) The previously mentioned acts delivered short sets, givings fans a small glimpse into their catalog, but it was the Migos set that stole the Thursday night show. Since releasing “Bad and Boujee” in 2016, the Atlanta trio has quickly become one of the biggest rap acts of their time. Thursday’s set included the hits, including a performance of “Slippery” with Gucci Mane, but also harkened back to Atlanta radio staples such as “Fight Night” and “Pipe it Up.” The crowd during Migos’s set was the biggest and most engaged both in person and on the live stream. (TV personality Terrence J told fans inside State Farm Arena that millions of people were watching the show online, but at its peak, the stream had around 20,000 viewers.)

While Migos had the most enjoyable set of the night, Lil Jon and Ludacris delivered a set that reminded fans of their status as musical veterans. Starting off behind the DJ booth before moving to the front of the stage for classic songs such as “Get Low,” as well as Atlanta staples like “Bia’ Bia,’” Lil Jon encouraged visitors to visit Atlanta’s strip clubs and poked fun at the New Orleans Saints during his set. “I’m sorry New Orleans Saints, but y’all ain’t in the Super Bowl,” he yelled. “I’m a diehard ATLien, motherf***er.” The DJ, producer and rapper returned to the stage twice during Ludacris’s set to perform “Yeah” and “Lovers & Friends.”

Ludacris’s hour-and-a-half set opened with the rapper performing “Welcome to Atlanta” alongside Jermaine Dupri. In the background, a picture of the Atlanta highway featured an i-85 sign, as well as one that said DTP (Disturbing tha Peace, Ludacris’ record label). The rapper’s performance spanned his catalog, from references to the now-demolished Georgia Dome and his radio name (Chris Lova Lova) on his debut single “What’s Yo Fantasy” to the controversial BET Uncut hit “P-Poppin.” Sonically and visually, the rapper’s set repeatedly paid homage to Atlanta’s culture, including its strip clubs.

Between performing his hits, Ludacris left the stage to allow Ciara, Jeezy, and surprise guest T.I. perform. The short performance from Ciara was a welcomed reminder of the time when the singer ruled the city and the Billboard charts. In the early 2000s, Ciara allowed fans across the country to get a glimpse of Atlanta by shooting her first music video (“Goodies”) at a car wash on Campbellton Road and name-dropping black neighborhoods such as Adamsville in “Oh.” The singer is a major part of Atlanta’s musical history from the turn of the century that is often overlooked.

The crowd had started to thin out by the time Ciara performed, but by the time Ludacris’s final guest, T.I., graced the stage around 1:15 a.m. to perform songs such as “Live Your Life” and “About the Money,” most of the audience at State Farm Arena had cleared out and the livestream viewership was down to less than 1000. The late-night set time may have played a factor in this, or because it was a weeknight, but perhaps if the show had started earlier, more people would’ve been interested in venturing further back into Atlanta’s hip-hop history. 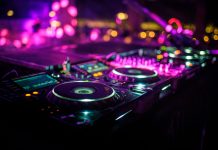