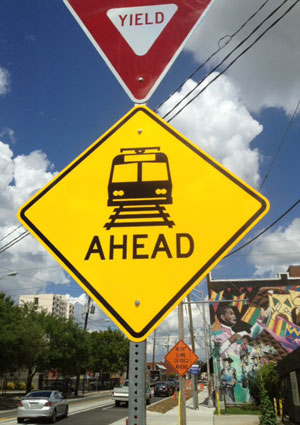 The Atlanta Streetcar has always been a tough sell on paper—even before construction challenges delayed its projected completion by a year, to spring 2014. Just 1.3 miles end to end, the route passes through blighted city blocks and is book-ended by the tourist hubs of Centennial Olympic Park and the King district, leading skeptics to wonder how ordinary Atlantans will benefit.

But just as the Atlanta BeltLine uses bus tours to illustrate its complex vision, the city enlisted Jonathan Weidman, a contracted MARTA engineer by day, to lead monthly Saturday walking tours through what is, on street level, a vibrant and culture-rich urban core. The 2011 Georgia Tech grad and self-described “transit nerd” will soon depart for D.C. to work on that city’s streetcar project. Walking the route with me on a muggy day last week, he reflected on his Atlanta experience.

Who shows up for the tours?
It’s kind of a crazy mashup. I had one guy from Sandy Springs who told a WABE reporter [paraphrasing]: “I came on this tour not because I live in the neighborhood or particularly care about it, but what happens in Atlanta has a ripple effect on the entire region.” I liked that. Another lady from Johns Creek was thinking about moving intown. She’s an empty nester; her daughter’s at Georgia State.

Just a lot of curiosity, really. What’s great about the tour is nobody who hates the project is going to spend three hours on their Saturday morning listening to me talk, so I don’t face a lot of haters.

What are the big questions?
Will this ever open? That’s the biggest one. A lot of questions about gentrification, or if the city has plans for development, especially on the east loop. A lot of misconceptions about what a streetcar is and looks like.

The gentrification question seems particularly sensitive given that such an iconic black neighborhood is in the crosshairs. How do you answer it?
That issue comes up with every transit project. There’s no good answer. To me it’s really about the speed of it. Are you kicking people out tomorrow, or is this a twenty- or thirty-year process of rejuvenation, and do the people who live here have the opportunities to capitalize on what’s happening to the neighborhood? But when I take people to Auburn Avenue and they see how run-down it is, they kind of go, “Okay, this neighborhood really needs help.”

It’s really interesting to walk people down Auburn. A lot of times you get these random history lessons, either from people on the tour, or one time, the pastor came out of Big Bethel and talked to us about the history of the church. (He gestures toward Dobbs Plaza.) This sculpture is called “Through His Eyes.” John Wesley Dobbs was the unofficial mayor of Sweet Auburn and grandfather of Maynard Jackson, which I learned from some homeless guy. I mean, I verified it was true.

What surprises people?
I think the biggest thing, and the reason I love doing the tours, is that it’s 2.7 track miles—a mile and a half end to end—and there are a lot of challenges with it. And you read about it and you’re like, “You know what? I don’t know if it’s worth what they’re spending.” [Nearly $100 million.] But when you take people out there and they see how big it is—it is just a mile and a half, but it’s such a critical mile and a half. And there are so many opportunities for expansion. This is really just a starter line.

And we’re doing a lot more than just the streetcar. We’re putting in upgraded sidewalks, bike lanes on the east loop connecting Old Fourth Ward and Inman Park to Downtown.

What do you say to people who think it’s a tourist trolley?
Downtown has a weak heartbeat right now, but it’s alive. People don’t realize this about Georgia State, but it has 30,000 students. It’s the second largest university in the state. There are tons of employment centers down here.

That’s another thing a lot of people don’t get: Streetcars are catalysts. You have to have something there already that people want to latch onto, and we have that. You go down to Edgewood Avenue—you know what it’s like down there on a Friday night. You kind of have that spark already. And then you have Auburn Avenue with so much history and rich culture.

Will people be willing to wait fifteen minutes between trains?
That’s a tough question. We have four vehicles, and the fifteen-minute headway comes from operating two of them. So we have that potential for better headways in the future, and that’s the real hurdle, having the vehicles.

How did you become interested in transit?
I grew up in the middle of nowhere in Vermont, but my grandparents lived in New York City, and I thought all cities were like New York. They have subways and sidewalks and skyscrapers and you don’t have to have a car. By my second or third year [at Georgia Tech] I’d been riding MARTA a lot and just realized how bad it was and decided to get involved. I joined Citizens for Progressive Transit and a couple other sustainability groups at Tech and became a big transit nerd.

Atlanta’s a weird, weird town in terms of transit. I went out to Utah for a conference, and Utah is probably the most conservative state in the universe. But I sat in this conference with the Chamber of Commerce, their board chair, all very conservative people, and they all stand up there and talk about the value of transit in their community. Georgia’s completely different. It’s more Tea Party, hate the government, hate taxes, hate people telling me how I should get places. And you have a rural legislature that beats down on the city. The T-SPLOST—that whole thing just decimated me. It’s one of the reasons I stayed here after school. I campaigned really hard for it, put in hundreds of hours volunteering. To have it fail was just, ughhh. Heartbreaking.

Changing gears. What’s your favorite spot along the route to grab a bite to eat? A tossup between the Sweet Auburn Bread Company and a Venezuelan place called Arepa Mia. And Noni’s.

Favorite pocket of unrealized potential? The Odd Fellows Building for sure. It’s an amazing building with so much history. And it has a rooftop venue space.

The next streetcar walking tour will take place on July 27. Visit the Facebook page for more information.