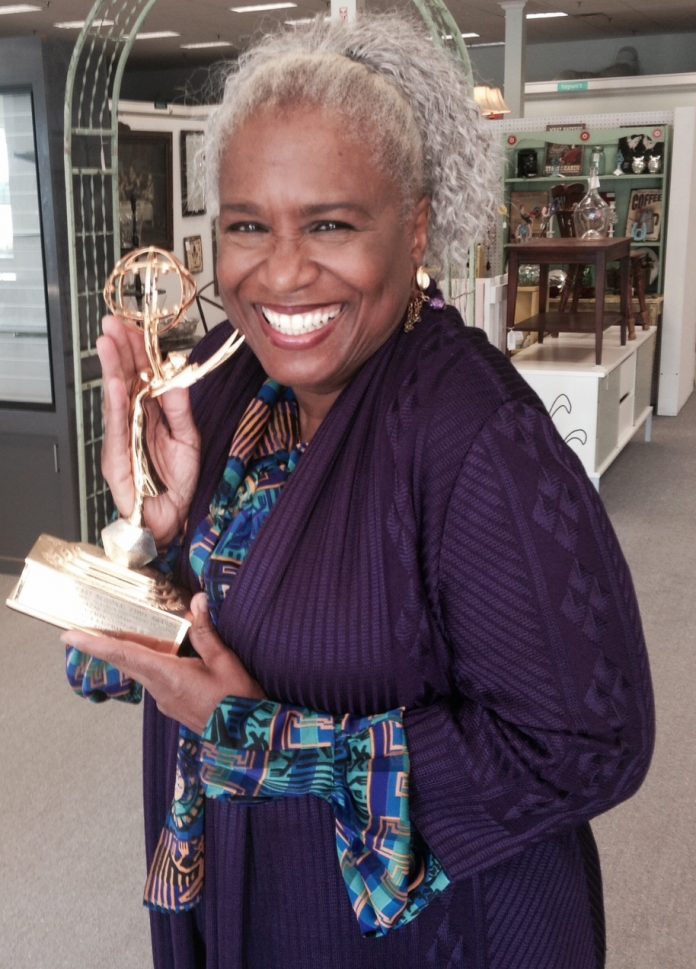 Marietta Antique Mall consigner Bob Ramaley estimates that he blew “maybe a grand” for the entire contents of an abandoned public storage unit on Canton Road back in 2012. The boxed up junk then enjoyed a two-year residency in Ramaley’s garage until last week when he unearthed the trinkets while setting up his booth at the burgeoning business on Roswell Road.

That’s about the time he discovered the winged golden lady with retired Action News anchor Monica Pearson’s name etched on it. It was the veteran Atlanta newswoman’s 2003 Southeast Regional Emmy Award for Monica Kaufman Close Ups.

Pearson let out a little squeal of joy Tuesday when Ramaley and Marietta Antique Mall owners Michael Scaturro and Annie Mason reunited the ladies. “I have 33 of these but they’re like your children, they each represent a story from a career,” Pearson told Atlanta magazine. “They represent a lot of hard work by a lot of people. I can’t tell you what this means to me. As you go through life, these mean more and more. My daughter Claire is an only child and one day these will be all hers.”

So how exactly did Pearson’s Emmy end up in a foreclosed Canton Road storage space? The newswoman offered this theory: “About 10 years ago, there was a woman collecting Emmys and other awards from celebrities because she was going to give them to children as encouragement. The AJC did a story on her at the time. It was for a charity that uplifted children and let them know that they mattered. So I gave her one of my Emmys.”

Sure enough, also included in Ramaley’s stash is Chris Rock’s CableACE Award for HBO’s The Chris Rock Show, PR guru Terrie Williams’ 2003 Beacon Award and an honor bestowed on Atlanta real estate magnate and philanthropist Herman Russell by Morehouse College. Lugging the heavy glass globe out of a plastic bin, Pearson offered to personally deliver the treasure back to Russell. He’s booked as guest this Sunday at noon on Pearson’s Kiss 104.1 FM show to discuss his new memoir, Herman Russell, Building Atlanta: How I Broke Through Segregation to Launch a Business Empire.

Scaturro picked up the tale from there: “Last week, Bob, one of our consigners, put this award on the counter and asked me, ‘Have you ever seen an Emmy before?’ When we saw Monica’s name on it, we knew we had to get it back to her.” Added Mason, Scaturro’s business partner and one of the originators of the Cobb Antique Mall: “Whenever we find something of a very personal nature like this, it’s only right to get it back to its rightful owner. That’s our policy.”

While Marietta Antique Mall doesn’t officially celebrate its grand opening until April 12, the sprawling business at 1427 Roswell Road and Ramaley, back in booth #118, already has one high profile fan. On her way out of the business, Pearson took to her Instagram and Twitter accounts to share a photo of the Emmy and this tweet with her 10,000 followers: “Thanks to these folks at Marietta Antique Mall, I got back my missing Emmy. Thanks!”