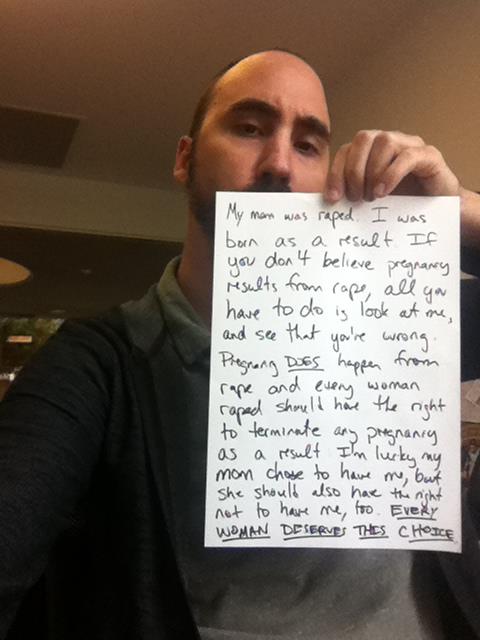 In the flurry of noontime Facebook activity involving Instagram lunch photos and gripes about traffic, Atlanta writer Thomas Lofton McLean‘s status update stood out Wednesday. It was a self-portrait of Lofton holding a hand-written note: “My mom was raped. I was born as a result. If you don’t believe pregnancy results from rape, all you have to do is look at me and see that you’re wrong.” Within seconds, McLean’s friends were sharing the post to thousands of their startled Facebook followers.

McLean had been weighing whether to share his deeply personal story ever since Missouri Republican Congressman Todd Akin attempted to define “legitimate rape” during an interview Sunday where he also theorized that rape victims’ bodies could “shut that whole thing down.” But for McLean, the tipping point came this week when Iowa Republican Congressman Steve King made the media rounds defending Akin, saying, “Well, I just haven’t heard of that being a circumstance that’s been brought to me in any personal way, and I’d be open to discussion about that subject matter.”

“This is not something that normally comes up in cocktail party conversation,” concedes the 32-year-old in an interview with Atlanta magazine. “But like most things, once the public gets personal, people get more motivated to speak out. These individuals who are in these really responsible positions of political power who are making these decisions about reproductive health when they don’t understand basic biology? That’s really frightening to me. It’s alarming that Todd Akin serves on the House [For] Science [and Technology] Committee. And when Congressman King made his comments about not being aware of a single case of pregnancy resulting from a rape, that was kind of the last straw for me. I just thought, ‘Are you saying I don’t exist?’ I was hearing from friends who said they didn’t know anyone affected by this and I said to them, ‘Yeah, you do.’  Granted, this is a really public way of relaying that message but I wanted people to know my reality.”

At age 23, McLean discovered the origins of his conception when his mother, in the early stages of Alzheimer’s, wrote him a letter detailing her rape at age 38 and the difficult decision she and McLean’s father made to go through with the pregnancy. “Before the disease robbed her of her memory, she wrote me a series of letters and this was one of the first I received,” he explains. “It was a blow but it didn’t really change anything. My dad is my dad. The rapist has nothing to do with my parental relationships. We talked about it after I read it and I said, ‘I’m glad you told me.’ I asked her if they considered alternatives and she said they had weighed their options. She said to me, ‘I’m glad I had that choice.’ That’s the thing that’s stuck with me. We also agreed that it changed nothing between us.” In retrospect, McLean says he’s grateful he and his mom had the conversation when they did. “My mom’s identity has pretty much been erased by Alzheimer’s at this point,” he says. “She doesn’t recognize me 95 percent of the time.”

With debate continuing to swirl as GOP party officials weigh the merits of finalizing the hammering of  a “no abortions, no exceptions” plank into their pro-life platform at next week’s Republican National Convention in Tampa, McLean realizes his story could become a part of the national conversation. He’s prepared for that. “I’m OK with it because I know in my heart that my mom would be OK with it,” he says. “That was the one thing I thought about before posting it. My mom had that choice and she would want other women to have that choice. Being a child of rape, it’s still a little shocking when other people share their stories with me. It’s probably a lot more common than anyone on the left or the right would care to admit. It’s a horrible thing that happens but it’s a reality.  And reality needs to be a part of any political platform. I posted this for all of my female friends who, if certain things play out, could lose their reproductive rights. This is a way of honoring my mom too.”

While McLean’s Facebook friends who are sharing his post continue to laud his bravery, he dismisses the notion. “I’m not brave,” he says. “I had absolutely no say about coming into this world. For me, the women like my mom who go through this, who are traumatized and violated in mind and body, having to make a tough choice and live with this everyday, they’re the brave ones.” 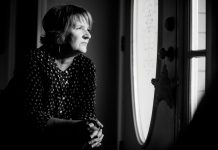 Police never found who shot and raped Susan Schuenemann, but she hopes science might

Newt Gingrich is Akin for revenge 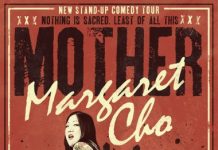 Margaret Cho on Todd Akin, her Emmy nod and preparing one Mother of a tour