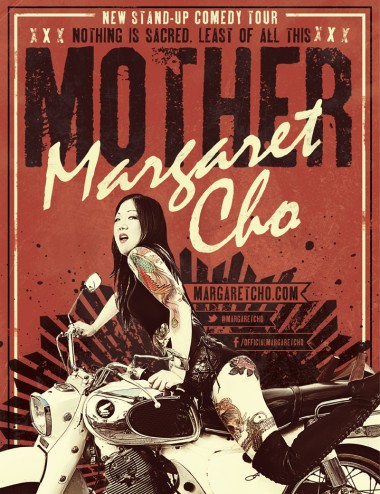 As if embattled Republican Missouri Senate candidate Todd Akin didn’t have enough to worry about as he continues his national “legitimate rape” apology tour, he’s now in Margaret Cho‘s comedic crosshairs. Akin’s recent comments about women being able to magically “shut that whole thing down” following a rape make him almost irresistible bait for Cho’s new fall tour “Mother.” The theme of the tour focuses on motherhood, female role models and empowerment. The show stops at the Punchline for shows at 7 and 9 p.m. on Sept 16.

A confused Cho told us this week: “I’m still trying to figure out what he thinks a ‘legitimate rape’ is. It’s just so sexist and typical of what these crazy, crazy people on the right think it’s OK to say. Clearly, his brain has been ‘legitimately raped.'”

Cho’s fans can also expect this year’s presidential race to turn up in the show. “You have to talk about it,” she explains. “It’s a scary thing. This election could easily go to the Republicans if we’re not talking about it and invested. For me, that’s not even an option. [Akin] isn’t alone or operating in a vacuum. These ‘legitimate rape’ people are just proving again it’s the right decision to have another Obama term.”

And Cho’s first impression of GOP presidential candidate Mitt Romney‘s running mate Paul Ryan? “I looked at him and thought, ‘Oh my God, that’s David’s boyfriend! He looks just like some queen I know!”

Apart from writing and preparing her new show, Cho, now a part-time Atlantan, has been busy tweeting about this past Sunday’s episode of “Drop Dead Diva,” shot here on location during this summer’s lengthy heatwave. The plot called for Cho’s legal eagle assistant character Teri Lee to pretend to be engaged in order to keep boss Jane Bingum’s wedding reception tasting appointment with a cretinous caterer played by real-life New York City cake guru Ron Ben-Israel.  After realizing the fraud, Ben-Israel screeches at Cho and her faux groom, “Get out, you cater whores!” Laughs Cho: “Wasn’t that great? That was such a great episode to shoot and Ron’s so darling. But it was so hot and we were eating this raw fish. As the day progressed, it just kept getting hotter and hotter and hotter. It got really gnarly.”

Naturally, the cornerstone of “Mother” revolves around Cho’s long-suffering Korean mom and a staple of her shows, Seung-Hoon Cho. “It’s great because I get to put a lot of emphasis on my own mother,” she explains. “And all of the jokes I’ve done about her over the years  that have been so popular. It’s great to be able to put all that material together cohesively. It’s very fulfilling. The show is also about how society looks for these mother figures in women like Madonna and Lady Gaga.” Cho promises her edgiest show yet.  “I’m always looking to take things way overboard. The nature of comedy is to keep yourself off balance for it to work. It’s a constant process of growing and trying to figure out how to present things. The writing and editing never ends for me on a tour. It’s a living, breathing thing that you’re always trying to refine and improve. That’s the great luxury of touring the material. It’s raunchy yet concise and really relavent to the moment. But yeah, it’s pretty filthy.”

Isn’t Cho worried about straining her vocal chords imitating her mother’s hilarious deep growl  of a voice for an extended period of time? She laughs and replies, “Actually, that’s not a problem. It’s more about finding the right tone to tell it the best. But it’s not been bad.”

On the “Mother” tour, Cho is booked to play on stages in theaters, playhouses and yes, some of the same comedy clubs where she cut her teeth 20 years ago. She explains, “I love taking the material into concert halls, theaters and then in comedy clubs like the Punchline, too. You get to see how it works in different places.” Is Cho worried about the cliche’ comedy club drunk asshole sitting in the back of the club swilling his two drink minimum and heckling her while trying to impress his date? “Oh, sure but that’s just part of it,” she says. “You’re never exempt from that wherever you perform. There’s always that drunk asshole. That doesn’t necessarily hurt or hinder what you’re trying to do. For me, it’s a great opportunity.”

Cho is also proud of being one of the interviewees in Atlanta filmmaker Jon Watts‘ “AKA Blondie” documentary about the legendary Clermont Lounge stripper, currently making the festival rounds. “Sexuality and being sexual shouldn’t have an expiration date and that’s what I love about the Clermont Lounge,” she says. “I also love that it’s something that Atlantans are really proud of. Everybody knows what it is. It’s even a place you take tourists to. It’s a landmark and something to behold. There’s a sense of joy and humor and a celebration of women that encompasses all ages and body types.”

Next month, Cho heads to the Emmys with her mom as a nominee for her guest stint last season on “30 Rock” as North Korean dictator Kim Jong Un and his equally deranged dad Kim Jong Il, who kidnapped Jack Donaghy’s wife, only to turn up as a cater waiter in the season finale. Are there plans afoot to ressurrect the character one last time during the NBC sitcom’s upcoming final season? Says Cho: “I don’t know but I would love to see that! I’m game. I mean, he survived death. Anything’s possible!”