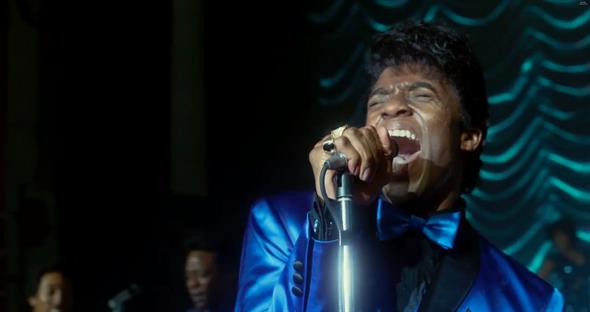 Last summer, before an inch of film was ever shot on the set in Mississippi, the actor who played Jackie Robinson in 42 met up with the director of The Help in Atlanta, they rented a car and road tripped it together to Augusta. Getting the most minute details of James Brown’s life right was a top priority for Get on Up director Tate Taylor and actor Chadwick Boseman, who plays The Godfather of Soul in the new biopic opening in theaters today. With the tsunami of lawsuits and arguments that swirled after the soul pioneer’s 2006 Christmas Day death in Atlanta, it probably didn’t hurt to have the support of the Brown estate either.

“Chad and I hit the James Brown trail,” Taylor told me last week while in Atlanta promoting the film. “We talked to managers, friends, the people in his life. We asked them to drive us around and show us things. [Brown’s second wife] DeDe Brown was with us. That’s how it should be. A lot of times, the reason the people making the biopic and the family and the estate don’t get along is simply because the family or the estate is ignored. This wasn’t just a gesture of respect for us. I wanted information and I wanted them to feel a part of it. They needed to meet the guy who was going to play James Brown. They needed to trust me. Once we got there, they heard my accent and realized I was from Mississippi. They met Chad and found out he’s from Anderson, S.C. [near where James Brown was born]. The next thing we knew, we were at a fish house, eating catfish together. There’s a comfort level that we have as Southerners together.”

The road trip continues this summer as the pair roll out the finished film in Atlanta, Brown’s hometown of Augusta and at The Apollo in New York. “I had been to the Apollo before to watch a friend perform,” said Boseman. “But I never thought I would ever be on the marquee or walk a red carpet there. To walk in and see photographs of the real James Brown and the history that comes along with all that? To now be a part of all that is pretty amazing.”

Get on Up reunites Taylor with The Help actresses Viola Davis, who plays the singer’s mother Susie Brown and Octavia Spencer, who portrays Brown’s surrogate mother Aunt Honey. Davis and Boseman share one of the film’s most powerful scenes, when the woman who abandoned Brown as a child reappears backstage after his triumph at The Apollo. Getting the scene right was important to everyone. “I’m an actor’s director,” said Taylor. “That’s my background, that’s how I work. Before we ever shoot anything, I bring the actor or actors to my home and I make dinner. We break bread together and we have a frank conversation and we spitball ideas. I ask the actors, ‘Are we missing something from the scene that needs to be there?’ Then I rework it and rewrite it. We didn’t rehearse it much. That’s not how Viola works. But we all understood the intention and the power of the scene.”

The film neatly sidesteps the chronological trappings of most biopics. Like The Godfather of Soul himself on stage performing “Hot Pants,” Get On Up constantly ricochets around, from the singer’s humble beginnings in 1933 South Carolina to the pivotal recording of the self-financed Live at the Apollo record in 1962 to Brown’s 1988 infamous PCP-fueled period when he was riding on rims, trying to out run the police who had just shot out his tires. Taylor achieves this by breaking the fourth wall and having the performer address the audience directly. “Who else would rise from the grave if he heard someone talking about him and interject himself?” Taylor explained with a laugh. “That was really my inspiration. The real genesis of it was asking myself: ‘How do avoid the typical biopic stuff, with the swirling headlines?’ I didn’t want to do that. James came to our rescue.”

For Boseman, the power that Brown possessed really hit him while shooting the concert sequence set at Boston Garden on the evening of April 5, 1968, the night after Martin Luther King Jr.’s assassination. In an effort to keep folks at home and to avoid the rioting going on in other U.S. cities, the concert was broadcast live and re-aired late into the night.
“That night on live television, James Brown could have said, ‘Let’s riot,’” Boseman explained. “If he had allowed himself to become emotional that night and allowed his music to do that, he could have. That whole night centered on two things: ‘Was there actually going to be a riot?’ and ‘Who would start the riot?’ Was it going to be the police, because they were agitated by the kids? Or was it going to be the kids? Ultimately, the kids in the audience that night came to listen to James Brown. And he was wise enough and he respected Dr. King enough to live up to Dr. King’s philosophies. He was sensitive to the moment.” Added Taylor: “Out of all the scenes we shot, Chad had the most introspection with that sequence. He took it very, very seriously.”

For all his triumphs, Get on Up doesn’t gloss over Brown’s demons either. It was important for Boseman and Taylor to depict the singer as a human being. “I asked DeDe Brown for permission to include some of the violence she and James shared in their relationship,” Taylor told me. “She reluctantly said ‘OK.’ I took it a step further. I told her, ‘I’m going to write this scene and I’ll send it to you. And you can say, ‘Change this, change that’ or tell me you don’t want it in the movie.’ I sent it to her and she said, ‘Yup, that’s it. Go ahead.’”

The Brown family flew out to Los Angeles three weeks ago to take in a preview of the finished film. “It wasn’t so much that I was afraid they might be mad about something,” Taylor explained. “I wanted them to be proud of him and of us. I wanted them to be able to say, ‘Wow, I’m glad it took this long to make and I’m glad it was with you.’ Getting their seal of approval was important. It let us know we did this right.”