Home News & Opinion From the Magazine After a stellar first season, where does Atlanta United go from here?...

Despite getting knocked out during the Major League Soccer playoffs, Atlanta United FC did not disappoint in its inaugural season. The team ended with a 15-9-10 record, showcased an aggressive style that resulted in the second-most goals of any team that season, and built a rabid fan base that packed Mercedes-Benz Stadium. Guiding the club was Gerardo “Tata” Martino, who led world-class squads such as FC Barcelona and his native Argentina’s national team before coming here. We talked to Martino about his first year and what to expect next season.

You came to Atlanta knowing you would be building a team, so success might not be immediate. When did you notice that AUFC was no ordinary expansion team?
As more people got interested in buying season tickets, as new players were signed, as we inaugurated the training center in Marietta and our stadium, we realized we were having success. So, as the year evolved, we watched things happen—and we ended up having a very good season.

Where does the team need to improve?
First, we’re bringing in new faces. We keep adding talent to the roster. [New players include top midfielder Darlington Ngabe and Ezequiel Barco, whose transfer fee reportedly was the highest in MLS history.] The signings have been excellent, so we hope to keep evolving.

You’ve coached at some of the world’s most passionately followed clubs. Did the reaction in Atlanta surprise you?
Truthfully, yes. This is the first time that I’ve lived in the United States. And, evidently, I didn’t have an idea of the magnitude of the effect that the team was going to have on the city. I strongly believe that our fans—our fanbase is pretty different than other teams in MLS—play an important role.

After living here for more than a year, what do you enjoy about Atlanta?
My wife and I discovered that we can live in a country where we don’t share the same language. For us, each day is a learning experience, from going out to eat to taking clothes to the dry cleaners. The truth is, we like it. People are very friendly. We feel very comfortable. And we work for a club that has all the conditions to perform very well.

On March 11, Atlanta United hosts D.C. United at Mercedes-Benz Stadium in its first home game of the season.

Care to predict where AUFC will stand at the end of the 2018 season?
Predictions are very difficult. But it’s clear that we have an obligation to improve on last year.

Which players should we be watching?
The majority of the players are known. They had a great season last year, and maybe the focus will be on our new or young players. But I think that because of the importance of the transfer, most people will be watching Ezequiel Barco. 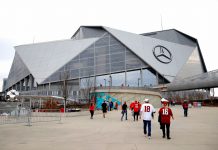