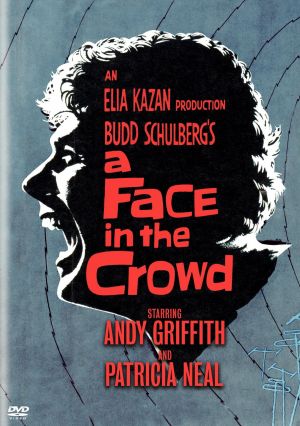 Most of us will forever remember actor Andy Griffith as the kindly TV sheriff in the sleepy Southern town of Mayberry on “The Andy Griffith Show.” Or your grandma’s favorite TV attorney, “Matlock.” Or perhaps the really creepy way that he was buried within seconds of drawing his last breath this week at age 86.

But when Turner Classic Movies pays tribute to the actor on July 18, the salute will lead off at 8 p.m. with perhaps the most badass role Griffith ever played. In his 1957 film debut in director Elia Kazan‘s “A Face in the Crowd,” Griffith plays conniving narcissistic folk singer Lonesome Rhodes in Kazan’s cautionary tale about the power of the media to transform a nobody into a global sensation five decades before Kim Kardashian discovered Twitter. Griffith gives a mesmerizing performance in a downright terrifying role where he goes toe to toe with Patricia Neal. In other words, Andy Taylor might even be persuaded to give Barney Fife back his bullets in order to take the likes of Lonesome off the streets. The film is even more fun to watch in the context of the saintly roles Griffith played on the small screen afterward (akin to watching “My Three Sons” actor Fred MacMurray off Barbara Stanwyck‘s hubby in “Double Indemnity” or sleeping with half the secretarial pool at Jack Lemmon‘s crib in “The Apartment”).

TCM host Robert Osborne told us Friday morning that writing and shooting the intros for the evening is high on his “to do” list as he prepares to fly into Atlanta to film the week of July  16. “What’s so interesting is that ‘A Face in the Crowd’ was his first film,” Osborne reflected to us. “It’s remarkable that Kazan saw something in him as an actor that led him to casting him in the role. Before, he he had always been a stand up comic or a ‘No Time For Sergeants’ type — a tall, goofy guy. The fact that Kazan could see something in him and for Griffith to give such terrific dramatic performance in his first film is quite remarkable. It’s not only telling about Andy Griffith’s talents but also Kazan’s instincts in casting. I also love that this film has finally caught on with people. For so many years, it was regarded as a kind of cult film that so few people had seen or were interested in. To see it being accepted now is terrific.”

Songstress Sarah McLachlan with her two children having dinner on the patio at Davio’s Northern Italian Steakhouse at Lenox Square this week. We’re told the singer enjoyed the spinach salad and lobster risotto. She was in town for a concert Tuesday night at Chastain. A few tables over, former New England Patriot and Super Bowl champ Rodney Harrison was digging into some pan-seared scallops and a plate of Davio’s signature spring rolls.