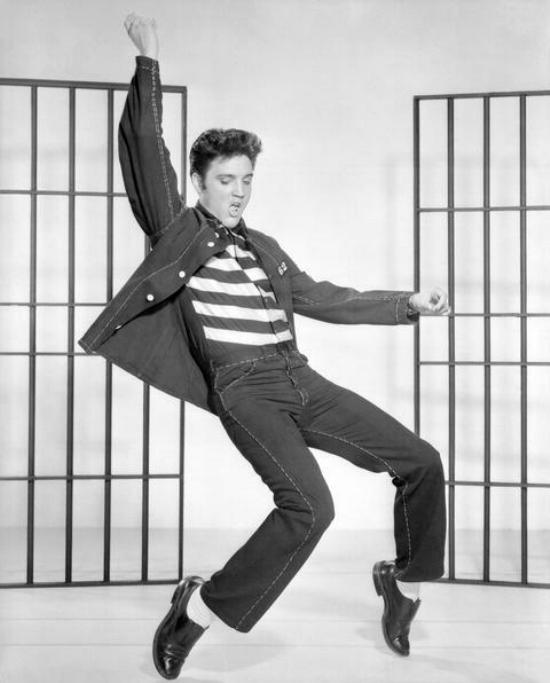 Weary of watching grown folks run their reproductive organs into large rubber spheres on TV this summer? Beginning today, Atlanta’s own Turner Classic Movies begins it’s month-long Summer Under the Stars film festival with 24 hours of programming dedicated each day to a separate star. On August 4, TCM will air a day of Marilyn Monroe‘s films to mark the 50th anniversary of her death and a day of Elvis Presley‘s flicks on August 16 to commemorate the 35th anniversary of his passing. On August 23, the centennial of Hollywood hoofer Gene Kelly‘s birth will be recalled as TCM host Robert Osborne sits down to discussed the late MGM song and dance man’s career with his widow Patricia Ward Kelly. Did we mention Japanese actor Toshiro Mifune scores his own day on August 9 when many of his samurai classics made with director Akira Kurosawa will be spotlighted? The line-up kicked off at 6 a.m. today with “Flying Leathernecks” with a day devoted to the work of Marion Robert Morrison. The star, perhaps, better known in the Hollywood galaxy of stars as John Wayne.

As always, Robert Osborne was delighted to give Atlanta magazine readers an advance peek at the line up.

Q: TCM is pulling out all the stops this year for the 10th annual Summer Under the Stars film festival, aren’t they?

A: It’s a great mix of people and I love that we have 14 folks in the line up we’ve never featured before on Summer Under the Stars. It’s fun to be able to devote a day to Marilyn Monroe because we’ve never really done that before. But also to honor Anthony Quinn, Tyrone Power, Lillian Gish and Eva Marie Saint, who’s always been such a great friend to TCM and to spotlight the work of someone like [30s child actor] Freddie Batholomew, who had such an interesting career yet no one really knows him today. I also love that we’re saluting Jeanette MacDonald, but only half of the pictures we’re showing feature her longtime partner Nelson Eddy. You can see that she had a really interesting career without Nelson Eddy as well.

Q: As a film historian, what’s the advantage for viewers of having a day set aside for each actor, often with their films presented in chronological order. It’s a pretty rare opportunity for us to see growth development and how acting styles emerged and how some careers faded, isn’t it?

A: That’s the great thing about it. You can see someone like Joan Crawford, who in time became very arched, very painted and very severe. To see Joan Crawford back in the 30s as a young woman, soft and very attractive, you can really see why audiences responded to her. As she got older and got very dramatic in pictures like “Mildred Pierce,” it’s interesting to see that evolution.You get to see that full career. The only person you can’t really do that with is Johnny Weissmuller who really only ever played himself, “Tarzan” and “Jungle Jim” in his films. But still, it’s fascinating to see him in the early 30s in those early “Tarzan” movies to the 40s when the studio had to get rid of him when he was too heavy to hang off a vine.”

Q: What can you tell us about your evening of Gene Kelly films co-hosted with his widow?

A: It was fascinating because Patricia could tell us a lot about what Gene Kelly was like in his older days. She had never really heard of Gene Kelly when she met him and had never seen him in a film. It’s interesting to me that there was anyone in the world who went to the movies who hadn’t seen a Gene Kelly picture. But she hadn’t. She brings us up to date on what he was like later on and also what his favorite films were. We were very happy to have her.

Q: My favorite days of Summer Under the Stars are always when TCM honors a star that modern audiences may not know anything about and it’s a chance for us all to learn something fresh. This year, I’m looking at the days dedicated to Kay Francis and Warren William, in particular. Tell us about why these two actors should still matter to audiences?

A: They both made so many movies and they’re so good, especially if you have an opportunity to focus on them throughout a day. Not to mention fun. Warren William was just a wonderful leading man, kind of like a George Brent or a Melvyn Douglas. He didn’t have a lot of charisma like a Tyrone Power or a Robert Taylor but leading ladies loved him and audiences loved him. He was very handsome and Warren William had one of the great, very melodic speaking voices of all time. But he didn’t detract from the leading ladies. And if you’re working opposite Bette Davis or Kay Francis that comes in handy. You couldn’t have Kay Francis suffering through a whole movie with Errol Flynn. The entire audience would have been looking at Errol Flynn! Lacking that va-voom! factor could very well play to your advantage and you could get a lot of work in Hollywood being a great utility player like that.

The Kat Francis films are a hoot, they’re so illogical, most of them. But they delivered what audiences wanted from Kay Francis and that’s for her to suffer a lot and for her to wear a lot of clothes. She would go out one door and through the next with a different outfit on! One of my favorites that she made is “Mandalay.” The whole thing takes place on a ship headed from Rangoon, I think. She’s been attacked by a man at a hotel and, terrified, she runs down to catch the boat with just a purse. Then for the rest of the picture, she’s on this ship and in every scene she’s got a different gown on and these great feathered hats. You find yourself asking, “Where in the hell did she get all those clothes?!”