The Empty Stocking Fund has been an Atlanta institution since 1927, after a group of employees from the Atlanta Georgian founded it during the Great Depression. The nonprofit allows parents to “shop” for their children and select gifts from the organization’s toy store every December, when Santa’s Village goes up, and more than 2,500 volunteers help distribute thousands of items including toys, books, socks, and educational items. Last year, the Empty Stocking Fund took second place in the 2018 GIVE Atlanta Challenge with a total $98,103 raised.

During its annual three-week run in December, the toy store serves an average of 2,000 kids a day and around 50,000 total. “When I first saw Santa’s Village with the massive crowds and heard their stories, I fell in love with the organization,” says Executive Director Manda Hunt, who first became a volunteer in 2005; five years later, she assumed her current role. “I’ve always been charity-minded and feel a great sense of accomplishment and satisfaction when helping others. I love giving parents the joy of providing for their children, which I think is so empowering and important.”

This summer, the Empty Stocking Fund expanded its giving by taking over the Kids in Need program from the Atlanta Community Food Bank. The program runs a similar model in which teachers at low-income Atlanta public schools are provided with classroom and art supplies. For the 2019–2020 school year, the Empty Stocking Fund prepared more than 6,000 backpacks with supplies for children at Atlanta Public Schools; the program will expand to DeKalb County and nine other metro Atlanta counties next year. The Empty Stocking Fund also partnered with another GIVE Atlanta Challenge runner-up, Giving Kitchen, to provide 60 backpacks for the children of food service workers.

Hunt sees this as an opportunity to merge the city’s many school supply drives into one hub and increase their impact on the community. By 2021, they expect to serve more than 200,000 children.

Elsewhere, their own Empty Stocking Fund team, currently incubating at the Atlanta Community Food Bank, has grown to four employees this year and is continuing to expand: “We’re hoping the Empty Stocking Fund becomes the go-to resource for other organizations doing similar campaigns for children. We’re working on bringing bigger partnerships for the full school year to support large initiatives like this,” Hunt says. 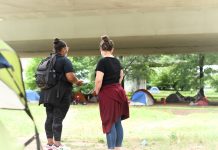