Home News & Opinion Hollywood of the South The Walking Dead Awards: The shot heard round the world 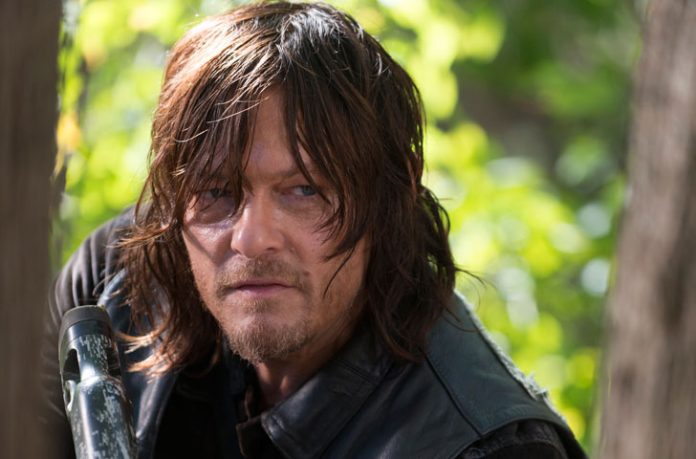 Each week, we comb through the guts of The Walking Dead, much like a horde of hungry walkers, to bring you the episode’s best moments, surprises, and other post-apocalyptic curiosities. This week: The Saviors are in the trees, Carol’s gone AWOL, and we prepare to get overrun by upset Daryl fans.

Worst mistake: You’d think after two recent hostage situations (the Saviors nabbed Carol and Maggie, Dwight got taken by Eugene) that Michonne and Glenn would be smart enough not to stop in the woods to have a conversation. That’s just asking for trouble.

New settlement alert: Did you notice that the guy Rick and Morgan chased off the farm appeared to be wearing armor? It’s possible that he’s a member of the Kingdom, another settlement that is part of Hilltop’s trading group.

Missed opportunity: Rick might not be taking any more chances, but he could have taken that spear. There’s an entire army of maniacs coming to kill your community—take the free weaponry!

Best haircut: Maggie’s new shorter locks are perfect for slaying walkers/Saviors and will be useful when her baby reaches the hair-pulling phase.

Still beating us over the head with it: One of the guns Carl grabs in the armory clearly came from a dead Savior, as a drawing of Lucille is carved into the grip. Okay, we get it: Negan is coming, and we’re scared because . . .

Biggest mystery: We’ve been predicting Glenn’s death since before the season six premiere. Based on what we know from the comics and what we’ve seen in the promo for next week’s season finale, that bell could be tolling soon. But there’s a problem. As of now, Glenn, Michonne, and Daryl are held by the Saviors. Carol and Morgan are also in the wind. Any one of those characters could easily take Glenn’s place at bat with the same emotional repercussions for Rick. This wouldn’t be the first time the show has pulled a switcheroo. Remember Andrea?

Cruelest plot device: With Denise dead, the only known doctor left is the ob/gyn at Hilltop. And since Maggie eventually ends up at Hilltop in the comics, we’re pretty sure her sudden abdominal pain is just a convenient way to get her there. But do the TWD writers really have to scare us like this? Surely Maggie won’t lose her husband and her baby.

Best exchange:
Michonne: Maggie has us on a schedule, and I’m not pissing off a pregnant lady.
Rick: Yeah, not that pregnant lady.

Best “kill:” Carol’s murder-fest. While she technically didn’t kill all of the Saviors, we were impressed that 1) she can still kill to defend herself and 2) that her initial machine gun blast left so many still alive. Not since the T-800 in Terminator 2 has such a widespread discharge of ammunition resulted in so few deaths.

Most disturbing image: Daryl got shot. We’ve already had to analyze one possible death frame-by-frame so far this season (Glenn’s dumpster disappearance). While it looks like Daryl was shot in the arm, we’re still hunkered down in case the fangirls riot.

Episode MVP: A tie between Morgan and Rick. Honestly, at this point, they’re the yin to the other’s yang anyway. We’re giving this award to both because Morgan finally stood up to Rick in a meaningful way, and Rick let Morgan go and continue the hunt for Carol instead of unleashing the Ricktatorship on him.